“Tinkers”: Synge and the Cultural History of the Irish Traveller (2010)

“Tinkers”: Synge and the Cultural History of the Irish Traveller (2010) 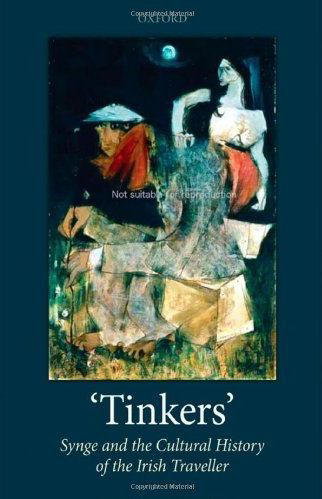 “Tinkers”: Synge and the Cultural History of the Irish Traveller by Mary Burke.

Understanding this misunderstood subject demands clarification of its terms. Professor Burke ends her introduction with an explanation. “Tinker” earns quotation marks “as the construct of the community within dominant discourse” (16). Travellers are those descended from those who practiced a nomadic way of life in Ireland; this term is now used by themselves and the settled population. This term may be a translation of siúlóir/ siubhlóir for “walker/ stroller,” which in Hiberno-English became “shuiler” (43). A Traveler refers to the American descendants of nineteenth-century Irish Traveller emigrants; Gypsy, by comparison, has been misapplied to Ireland’s historically indigenous itinerants.

Definitions display the care with which Burke approaches her topic. She begins with “literary antecedents of the Irish Revival Tinker.” The “pseudo-historiographical tradition” places Travellers in a Milesian, if exotic, scenario: “The Irish past was another country, and that country was usually in the east.” This orientalization of the Traveller shaped a “proto-ethnic” origin myth. Burke examines pre-Celtic attributions for Travellers, and their continuity in Enlightenment categories of Gypsy, rogue, and “tynker” that define a Romantic-era fascination with the picaresque. Comparing and contrasting the Scott(ish) with the Irish versions of “tinkers,” Burke then shifts to Revival dramatizations.

Synge’s The Tinker’s Wedding (1907) “upends the binary of pious settled person and impious tinker,” to demonstrate the artificiality of who’s a nomad and who’s settled (71). It places the censorious priest in the same suspicious light as that which tracked the tinkers. Burke examines earlier drafts, stage directions, and contemporary influences. She shows how the sacred and profane, the chapel and the camp, force the viewer to confront as a unified whole what insular prejudice has kept segregated.

Her third chapter, “Playboys of the Eastern World,” explores Orientalist pursuits of Synge and his colleagues into the Aran Islands. Burke places folkloric inventions within Synge’s prose narrative next to a previously overlooked impact. Synge linked his faith’s loss to Darwin’s rise; Burke situates this within Anglo-Irish, late-Victorian Ireland. She suggests that “Yeats, like Synge, constructs the Protestant-led Revival as a compensatory response to evolutionary theory” (115). Prevalent hostility to Darwin and The Playboy of the Western World reveals the era’s cultural fear of “amorality and nihilism” (122).

Chapter Four explains how Tinkers threatened stability via post-Revival entertainment. She examines Seán Ó Coisdealbha’s comedy An Tincéara Buí(1957), the challenging if uneven Frank Carney play The Righteous Are Bold(1946), and Maurice Walsh’s novel The Road to Nowhere (1934). These tended to reaffirm the dominant social pieties even as they allowed room for Traveller confrontations with them.

Travellers themselves gain the stage, write the stories, and enter the films made after their communal politicization. Their débuts are preceded by Bryan MacMahon’s The Honey Spike, both the 1961 play and 1967 novel of the same title, which were enriched by his knowledge of Cant (Shelta), the Irish Traveller language. MacMahon reports the language as everyday communication rather than “exotic archaism,” and Burke finds in its power a portent of the Troubles. Tom Murphy and John Arden’s dramas deal with mobilization among the wider community as Civil Rights issues begin to stir the Irish, as emigrants and natives. Radicalization of those distinguished by “peripatetism” infuses these late twentieth-century plays.

Juanita Casey and Rosaleen McDonagh remind Burke of Jean Rhys’ Wide Sargasso Sea as feminist and class-conscious responses from those finding their voice. She compares their authority to the madwoman in the attic talking back to Jane Eyre, or Travellers encamped outside the Irish Big House. Casey’s first novel The Horse of Selene (1971) and McDonagh’s experimental performance The Baby Doll Project(2003) draw on their own lives. These activists speak for their community. From a generation gaining literacy and respect, they assert themselves within and against a patriarchy, at least from stereotyped Traveller and settled perspectives. Their radicalism, however, seems to have not shaped their community’s recent portrayals in British, Irish, and American films. These tend to lag behind Traveller-originated literature and drama, to date, or their entry into Irish and British political arenas.

For almost a century, Travellers have been represented on screen. Into the West,This Is My Father, and Trojan Eddie emerged from 1990s Ireland, but Burke finds them wanting in the conviction that energizes literary and dramatic efforts beginning to emerge from Travellers themselves.  Snatch gains a wry eye; Burke notes parallels with The Tinker’s Wedding in Guy Ritchie’s 2000 film. It suggests prejudice is being projected onto Brad Pitt’s character of Mickey, a “pikey,” by even “more unsavoury associates” (247).

Irish-American Travelers, often lumped with such associates, earn study. Traveller(1997) and The Riches a decade later as an F/X cable television series capitalize upon criminals seeking redemption, or those forced to seek it after being forced to do so by “community consensus.” The conflation with “white trash” within American culture offers abundant opportunities for cliché. All the same, as inSnatch and Synge, mainstream characters are shown to be as consumed by amorality as those whom they denigrate.

What contrasts exist between Irish Travellers and Irish-American Travelers? Burke glides past this crux, but she notes that mainstream American whites regard as “natural” the possession of an “Irish and Christian heritage.” For the Irish, the Other turns more towards the Romany as the Traveller is seen to be indigenous, one of their own. Deviance from the norm, it seems, for both nations appears brief for those designated as (or claiming the identification as) Travellers. Future attention to this context by scholars and community activists who study “Tinkers” may clarify what her dense, tenaciously argued, and theoretically aware survey has established by its close reading of primary and secondary texts.

Burke seeks an end to the equivalence of Traveller with marginal. As recent literature and activist campaigns show, the marginalized can get along with the majority. “Otherness” may exhaust those relegated to the edge. Differences can be honored, as in a film by Travellers, Pavee Lackeen (2005), without fetishizing this minority. Perhaps their “exotic sameness” will become a new norm, at last.