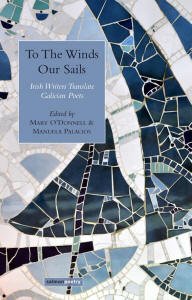 To The Winds Our Sails. Irish Writers Translate Galician Poetry. Cliffs of Moher

This volume is in some sense complementary of Creation, Publishing and Criticism. The Advance of Women’s Writing since it selects some poems by Galician Women writers and offers their translation into English and (one in each author) into Irish. Manuela Palacios’s essay, “Galician Women Poets Today: Moving from Strength to Strength”, begins by stating that sacred names such as Cantigas or Rosalía de Castro have been appropriated as an icon of national identity but since Rosalia’s times other women writers have worked vigorously for the advance of Galician poetry. There is a generation in the 1950s, a second wave in 1970s —though they did not publish until the 1980s, the late 1980s and early 1990s — and  then we must refer to the younger generations that elbow their way into the literary establishment. The writers of the collection display heterogeneous aesthetic approaches and interests, they belong to different generations and have gone through unlike life experiences but they have something in common: their determination to play an active role in the advancement and remodelling of a poetic tradition that cannot afford to do without women’s voices. Ten poets ranging in age and concern.

In the Introduction, Mary O’Donnell deals with an important feature: according to her, Irish and English are much further apart than Galician and Spanish and Galician is much more widely spoken than Irish today. In Ireland Irish is frequently “a sanctified code to be pulled out and dressed up on official and formal occasions”. She also draws our attention to what she calls the “environmental difference” as a decisive one. In her opinion, in Galicia there exists a more heightened consciousness of the fragile nature of the eco system than in Ireland, something that has affected the writers deeply. On the other hand, Galician scholars’ interest in Irish writers has been evident, but perhaps the other way round was not so clear. Each Galician poet has contributed with five poems, one of them being translated into Irish. Not all the translators speak Irish so Rita Kelly has lent a hand as well as Martin Nugent.  With regards to the translator the book includes first rank names such as Nuala Ní Dhomhnaill. In this volume translation proves to be what Michael Cronin defines as a “journey through language” and “that art of discovery”. For translation — both as an art and a science — is itself the target of a book where literal translations coexist with free versions, considering both the spirit and the letter, but above all trying to catch the “soul” of every  poem.  Mary O’Donnell echoes Michael Cronin’s words when stating that “translation has played a critical role in shaping discourse around identity, language and cultural survival in the past and in the present”. So the clearly defined purpose of the book is to contribute to the further shaping of such discourse, with the hope that there is a reciprocation between the sister-poets of both side of the Atlantic, and that this will forge a two-way literary channel between our cultures. The diversity among the poets in technique, experience, style, and tradition reinforces the challenge of making them sound in another language, mainly because, as Mary O’Donnell says, all of them are imbued with an ear for the music of language. Unfortunately, my lack of knowledge in Galician and Irish language prevents me from testifying the achievements of the volume in depth, but reading the translation in English I have enjoyed powerful and beautiful lines which echo the force of Galician originals. We totally subscribe Mary O’Donnell’s statement that in the times of the local and global, anything entailing exchange and mutual dialogue must be by all means favoured. And that in the times of technology poetry, and especially poetry translation, makes us aware of what is the other and what is the same and the ability to recognize both. This interweaving of cultures and — more accurately languages — is a good path to know the small world we live in.