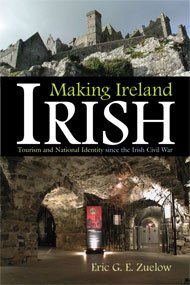 Making Ireland Irish uses tourism as a cultural and political measure of how Ireland imagined itself and how it wanted to be seen by others.  To survey eighty-five years since Irish Independence, Eric G. E. Zuelow draws on archival work in Dublin, Cork, Belfast, and elsewhere, including the National Archives, the Bord Fáilte Photographic Archive, and the Public Records Office, Northern Ireland.  His extensive research is indispensable because tourism, an especially sensitive barometer of Irish culture and self-image, sought consensus between the private and public sectors, between a cosmopolitan centre and the storied provinces, between centralized authority and regional initiative.

Zuelow’s first three chapters provide a chronological overview of tourism between 1922 and 1994; his last chapter, “Tourism and the Tiger”, considers the historic changes in not only tourism but also Ireland between 1994 and 2007.  Intervening are three thematic chapters devoted to culture and language, to the construction of the Irish history, and to the treatment of landscape.

Tourism is an especially engaging subject because it brings together the least likely of bedfellows: politicians and artists, hoteliers and newspaper editors, civil servants as well as the brewers of Guinness.  Zuelow begins with key questions: was tourism in the national interest and, if so, what image should Ireland project to the world?  Both questions proved central after Irish Independence, not only to tourism, but also to theatre, literature, music, and the visual arts.

Competing and sometimes mutually exclusive notions of to whom and toward what Irish tourism should direct its energies vied for state funding, corporate partnership, and popular support.  Should resources focus on attracting those interested in the Irish language?  How could state agencies negotiate between tourist’s expectations for a quaint, “authentic” experience and yet avoid kitsch-laden, theme-park “Paddywhackery”, especially at events such as the Puck Fair in Kerry?  What images best represented Ireland’s past, present, and future?

In the tumultuous early years of the Irish Free State, the Irish Tourism Association superseded regional tourism boards.  Despite the Cumann na hGaelheal government, the early years of the Irish Tourism Association was dominated by what one of their number C. S. Andrews described as  “’a coven of ex-IRA men’” (16).  By 1929, no fewer than thirty-six separate publications hoped to attract domestic as well as foreign tourists.  In fact, until the economic impact of tourism was undeniable, some, including E. T. Keane, editor of theKilkenny People, aggressively opposed encouraging foreign visitors and any tourist scheme that might drain government resources.

A crucial moment came in the 1960s when “Irish poverty was reformatted to symbolize Irishpurity” (117; original italics).  Zuelow effectively synthesizes regional and national initiatives, the workings of a host of government agencies (as various as the Office of Public Works, the National Graves Association, the Department of Finance, and the Department of Foreign/External Affairs).  Beginning in 1962, Bord Fáilte promoted Ireland as a “land of festivals” (133) and awarded grants to regional sponsors in support of events like the Yeats Summer School, the Dublin Theatre Festival, and the Cork Film Festival.

Twentieth-century Irish tourism was shaped by legislation, not only by governmental fiscal appropriations but also by such as the 1929 and 1952 Tourism Traffic Acts, the National Monuments Act, and a host of other thoroughly-debated legislation.  A persistent challenge to tourism was the construction of a version of Irish history “that would not offend outsiders while also assuring equanimity within Ireland itself” (153).  That political opponents in Fianna Fail and Fine Gael might disagree on any account of Irish history, especially events from the early twentieth century, seems self-evident.  No matter.  In many instances, “little attention was paid, either by tourists or the Tourist Association, to the actual history of the sites/sights in question” (138).

One of the most interesting case studies in Making Ireland Irish is the restoration of Kilmainham Jail and its eventual development as a tourist destination.  For nearly two decades the work of a private voluntary group, the Kilmainham Jail Restoration Society, kept alive the vision that Kilmainham could be restored.  More than just restored, Kilmainham Jail was transformed: what was once a site of oppression and suffering was recast as one of heroism and triumph.  Zuelow’s coverage ends in 2007, but the Pearse Museum and St. Enda’s Park in Rathfarnham, which the Office of Public Works opened in late 2008, offers yet another instance of the striking transformation of an historical site.

Zuelow’s contribution can also be read as an overview of the development of one of Ireland’s most important industries. Although some efforts to attract foreign visitors, such as the Aonach Tailteann in 1924, 1928, and 1932 might have been more fully documented, a singular strength of Zuelow’s study is the remarkable spectrum of media covered. Print publications, such as Ireland of the Welcomes, festival programmes, guidebooks, postcards, advertisements, as well as pageants, films, radio broadcasts, and even postmarks (that urged “See Ireland First”) all figure in Zuelow’s highly readable analysis.  Making Ireland Irish joins several recent publications — including Ireland’s Heritages: Critical Perspectives on Memory and Identity (2005), edited by Mark McCarthy (to which Zuelow contributed) and Guy Beiner’sRemembering the Year of the French: Irish Folk History and Social Memory (2007) — in an ambitious project to map Irish heritage.