by Ana Mª Terrazas-Calero. This text may be archived and redistributed both in electronic form and in hard copy, provided that the author and journal are properly cited and no fee is charged for access. 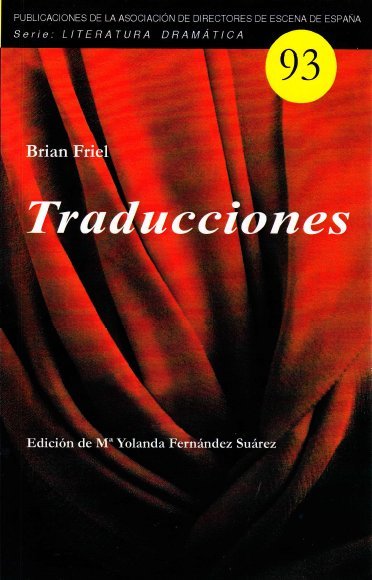 Yolanda Fernández Suárez’s Traducciones skillfully brings to the attention of Spanish readers world-renowned playwright Brian Friel, by prefacing her version of Translations (1980) with a detailed introduction to his life and literary production which, although perhaps unnecessary for a non-specialist audience as the book focuses on one play, serves to familiarize the readers with his dramatic artistry. Furthermore, Fernández Suárez also enhances their experience of reading Translations by providing them with detailed information about the political, historical and cultural context that served as a backdrop for this play, as well as with reflections on its reception in Spain. The reading of this version of the play is further enriched and made more comprehensive by the final appendixes which contain glossaries with detailed information about the classical references mentioned in the play, as well as about the Irish cultural terms and anthroponyms that are such a central part of the book.

Translations is a three-act play set in the fictional, Irish-speaking town of Baile Beag, Co. Donegal, in 1833. The plot, which takes place in a hedge school, examines the complexities of imperialistic colonization and the devastating effects on the language and identity of the colonized by portraying a small town community whose quiet life is about to be disrupted by the imminent introduction of the colonial National School system and the arrival of two imperial officers tasked with the recharting and renaming of the land.

In the section “Traducciones: elementos históricos”, Fernández Suárez explains in depth what she considers to be the three historical triggers that set off the events portrayed in the play, thus making it easier for a reader who is unfamiliar with Irish history to understand the plotline. She refers to the Anglicization of Irish toponyms, which is being performed in the play by Captain Lancey and Lieutenant Yolland, both of whom she describes as being representatives of the colonial power, as the first event. She also presents the instauration of the National School system, which made education and the use of English as a vehicular language compulsory, thus relegating the role of the Gaelic language, as the second trigger, while the ghost of the Famine, which would decimate the Irish population and lead to a massive exodus, looms throughout the play as the third.

Despite clearly portraying the historical and political atmosphere of the period, Fernández Suárez interestingly remarks upon Friel’s desire to distance Translations from a political context while turning it into an advocate of the importance and power of language, an idea prevalent in George Steiner’s lingo-philosophical treatise, After Babel: Aspects of Language and Translation. The tremendous influence of this treatise on Friel’s play, which is described in this book as a dramatization of Steiner’s book, is brilliantly illustrated in Fernández Suárez’s introduction, where she provides the readers with extracts from Friel’s diaries, while also making in-text references to indicate parallelisms between some scenes and Steiner’s ideas, which are expanded on in Appendix III; a part of the book that, despite being informative, could be confusing for non-academic readers as it shows quotations from Steiner’s book, yet those quotations are not explained.

The driving theme in Translations is Steiner’s notion of the importance of language as a core element for the construction of national identity, in this case, Ireland’s, as it is the medium through which the environment is reflected, and appears in the play in different ways:

In the introduction to her book, Fernández Suárez reflects on the fact that the resonance of this idea with political issues in Spanish territories such as Catalonia or the Basque Country may have been the reason this play was originally translated into Catalan and Euskera, and not into Spanish. Furthermore, one of the clearest topics in the book is perhaps the representation of the process of translation as the event that triggers miscommunications between both cultures and a subsequent loss of identity.

Even though these lingo-philosophical notions are central to the play, the linguistically complex nature of Translation poses a real challenge for translators. It is a multilingual play, with Latin and Greek references, which is to be understood as being performed in Irish and English, while being fully written in English and while presenting communication breakdowns between the characters. Despite this paradoxical element, Friel masterfully represents the conveyance of sociolinguistic information inherent to language use by distinguishing the Irish characters from the English ones. Thus, the Irish-speaking characters use Irish English, a dialect that has traditionally been associated with low-class, illiterate speakers, while the English officers use formal Standard English, a variety linked with educated people. In translating this play, Fernández Suárez ran the risk of losing that juxtaposition and the distinct vernacular used by the Irish English-speaking characters, yet she managed to successfully extrapolate this linguistic nuance into Spanish by converting the vernacular, Irish English expressions of Baile Beag’s citizens into vernacular Spanish, while having the English characters speak standard and formal Spanish.

While vernacular grammatical features of Irish English such as the use of embedded questions or the lack of a relative pronoun which pepper the play were not translated, Fernández Suárez made a big effort to translate aspects that are difficult to convey in a different language. For instance, she converted dialectal words into non-standard Spanish words, as in the case of orujo casero (poteen), viejo (aul), or wee, which is interpreted as a diminutive with Spanish nouns such as in el tontaina (the wee get), or los pueblecitos (the wee villages). It is necessary to mention her skillful translation of the popular Irish English discourse marker sure in clause initial position, which is used throughout the play to reinforce a statement, and which she translates in a variety of ways (i.e. seguro, desde luego, la verdad es que…, por supuesto, etc.), as exemplified in: Desde luego mejor que la tengáis vosotros que no ese ternero negro (Sure it’s better you have it than that black calf).

The use of taboo language and religious expressions, which is a highly popular linguistic feature in Irish English that appears all over the play, is another complicated feature to translate, as these words convey a specific intensity depending on the context they are used in. However, despite the complexity of extrapolating the shocking value of these words into a different language, Fernández Suárez masterfully resorts to vernacular Spanish equivalents such as ¡válgame Dios! for vernacular Be Jasus and Be God, or, among others, Bendito sea Dios instead of the more standard Jesus!. The translation of taboo words in this book is also praiseworthy as she succeeds in conveying the correct amount of intensity into the Spanish taboo words, depending on the context they were used in the original text. Thus, bastard can act as cabrón, as in Temía que algún cabrón de vosotros se fuese a reír, or as the stronger hijo de puta in Yolland, eres un hijo de puta. The same applies to bloody, which is translated with various degrees of intensification as its shocking value augments in English, as in es cojonuda (bloody marvelous), maldito, maldito imbécil (bloody, bloody fool), Owen, ¡es una jodida operación military! (It’s a bloody military operation, Owen!), or ¡Joder!, ¡Joder!, ¡Maldita sea! (bloody, bloody, bloody hell!).

Finally, the implicit advocacy for the process of translation to become the means by which a different culture and identity is to be understood and respected and not obliterated that takes place in this metaphorical play has been clearly achieved in Fernández Suárez’s commendable book. Traducciones is not only a means to linguistically understand Friel’s play, but, through its detailed, albeit at times excessive, contextualization of the original text and the historical context it was set in, it becomes the medium through which the Spanish readership can become better acquainted with Irish culture.