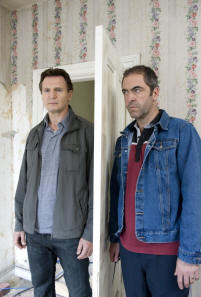 Two very different films appeared in 2009 to remind us that Troubles cinema has not gone away. Canadian Kari Skogland, who works mainly in television, directed one, Fifty Dead Men Walking. The other was Five Minutes of Heaven, directed by Downfall (2004) director, Oliver Hirschbiegel. Both share the same producer, Eoin O’Callaghan, but little else. I mention Fifty Dead Men Walking more to dismiss it than to linger on it. An informer narrative, based on the eponymous memoir by Martin McGartland, the film is set in Belfast in the 1980s. McGartland (Jim Sturgess) is an innocent charmer and lad-about-town who is hired by the British Secret Service (headed by a lugubrious Ben Kingsley who works under the code name “Fergus”) as an informer. Acting on what he believes to be proper principles, McGartland soon lands himself in deeper water than he could have anticipated and is eventually sold out to the IRA by the British. A last minute rescue sees him flee the site of his torture and set up anew in Canada. The title refers to the fifty men McGartland believes himself to have saved by informing, though in the end it seems that he will never be able to save himself. Shot in fast-paced contemporary thriller style, the film is marked by its determination to present the Troubles in as entertaining a manner as possible. Only when the drama slows towards the end is the viewer left in the uncomfortable position of having to reflect on the narrative construction or indeed to consider the moral message, if there is one. In the place of complexity come all the thrills of McGartland’s possible detection, their reality-effect guaranteed by the knowledge that they are based on actual events. This in itself proved problematic for the film’s makers when McGartland threatened an injunction that would have prevented Fifty Dead Men Walking’s gala screening from taking place at the Toronto Film Festival of April 2009. His argument was that the film did not represent his position accurately. In the end, a confidential agreement was reached between the producers and McGartland, and the screening went ahead. Subsequently, a number of journalists reported that McGartland had contacted them following their reviews to “correct” inaccuracies. Skogland herself told Michael Dwyer in The Irish Times that: 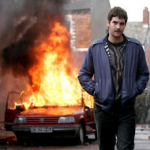 I liked the universality of the story because, whether it’s happening in Ireland or Iraq or in an inner city, the notion of someone choosing to go against their community and potentially giving up their life and their future, or facing torture as retribution, was a very compelling story. That’s what hooked me; the human drama behind it.

Others, notably Ronan Bennett in The Guardian, argued for the problematic nature of all informer narratives, particularly one that seeks to justify or glamourise informing (McGartland wrote to The Guardian“correcting” Bennett).   Overall, Fifty Dead Men Walking is best defined as a project conceived with some naivety and almost complete indifference to historical accuracy, a criticism that will sound familiar to anyone who has studied Troubles cinema.

A more considered piece, Five Minutes of Heaven is concerned with exploring the issues surrounding reconciliation. The narrative focuses on two men, one, Alistair Little (Liam Neeson), a former Loyalist killer who has done time for the murder of a Catholic, Jim Griffin (Gerard Jordan), an act witnessed by Jim’s younger brother, Joe Griffin (James Nesbitt). In the spirit of reconciliation, a  television company that makes One on One(a programme about “the man you could become” in the words of the researcher), plans to bring the two men face-to-face for the first time since the assassination. Little is now a peace worker; Griffin is an emotional wreck, revisited by flashbacks of the murder and his mother’s accusation that he could have prevented it. He is unable to respond adequately to his wife and two young daughters and his home life is fraught. Following Griffin’s last minute refusal to appear in front of the cameras, Little seeks him out and the two face up to each other in a cathartic fistfight.

Reviewing Five Minutes of Heaven, the Hollywood Reporter critic commented perceptively that: “This highly emotional, very talky movie, which feels more like a play, seems best suited to television in the U.K., parts of Europe and South Africa, where people are coming to grips with the crimes of civil wars and genocidal atrocities.”  Yet, for all its post-Troubles emphasis and exploration of the ambiguities of reconciliation,Five Minutes still rehearses many of the signifiers of conventional Troubles cinema. For instance, the opening sequences emphasise the commonalities shared by the killer and the victim, now played by Mark Davison and Gerard Jordan. Each is brought up in an old working class Lurgan house in a narrow street decorated by political murals; both families are watching the popular BBC Saturday evening show, Bruce Forsyth’s The Generation Game, as one young man prepares to shoot the other; the victim’s mother is the canteen lady at the apprenticeship of one of the Loyalist gang’s members. In this community, ties are as strong as divisions. In common, too, with Troubles cinema narrative conventions, the killing is identified as senseless  —  Jim Griffin was about to leave the stonemason’s yard where he worked to set up his own business anyway.

“Truth and reconciliation… I’m going for revenge”, Joe Griffin promises himself in the mirror as he waits for his nemesis to arrive and the programme to start filming. A cut-away shows Alistair Little being driven along the coast to the stately home where the programme is being made, the magnificent house a symbol of the distance, literally, of peace and reconciliation from the streets. The edit underlines the philosophical message   —  each man is the mirror image of the other, each needs the other to complete himself. Griffin’s “Five Minutes of Heaven” will be, he hopes, when he refuses reconciliation and knifes Little. In the end, however, he cannot bring himself to execute his plan.

The film has little sympathy for the kind of programme that is to bring the two men together; Griffin rails against the platitudes such television making reproduces, its voyeuristic nature, the excitement that its viewers will feel on seeing a real killer. Little’s own introduction to camera seems rehearsed: “For me to talk about the man I have become, you need to know about the man I was …” , a story so often told that it has lost its bite.

Just as The Quiet Man (John Ford 1952) sought redemption for its killer in a physical punch-up, so Five Minutes advocates the abandonment of words for a display of pure, unreconstructed male aggression. Throwing punches at each other is a primitive reconciliation, or catharsis, based on touch and pain, but it is, apparently, all there is. The fight sequence ends with both men falling through the upstairs window of the Griffins’ old, abandoned home, and landing on the pavement below; they both lie there prone for a few seconds before raising themselves, reborn, from the ground. “I wanted to be someone; I wanted to walk into the bar a man, walk in ten foot tall and hear the applause from the only people who mattered to me then. And I heard it. And it was good,” Little confesses to Griffin before exhorting the Catholic to forget him and to return to his wife and children. Still, Little, the Protestant, remains the rational thinker, Griffin, the Catholic, his volatile, emotional Other, even now unable to articulate his own experiences.

Of course, the real showdown is between two of Northern Ireland’s most celebrated actors and this is what gives Five Minutes its edge. The ironies of the casting  —  Neeson is a Catholic, Nesbitt a Presbyterian  —  will have been lost on most audiences but must surely have informed the performances. Both men were born in Ballymena, both enjoy international reputations, although Neeson remains the most familiar face in Hollywood while Nesbitt is better known for his appearances on British television (notably in the long-running ITV comedy series, Cold Feet). Nesbitt has appeared more frequently in Northern Ireland dramas  —  The End of the World Man (Bill Miskelly, 1985), This is the Sea (Mary McGuckian, 1988), Resurrection Man (Marc Evans, 1998), The Most Fertile Man in Ireland (Dudi Appleton, 1999), Wild About Harry (Declan Lowney, 2000), Bloody Sunday (Paul Greengrass, 2002); for Neeson Five Minuteswas a return home, both narratively, but also professionally, an opportunity perhaps to square up to the “local boy”. Nothing in the performances suggests that there is any love lost between the two men, rather more that we are watching a display of competitive masculinity, a kind of gladiatorial spectacle.

The credits at the end of the television broadcast of Five Minutes thank the two men whose own stories provided the background to the semi-fictionalised events. It also supplied details of help lines for viewers affected by what they have seen, thus positioning the production itself within the parameters of the fictional programme on reconciliation it had so recently satirised. These ironies and the production’s own unresolved ambivalences  —  the word or the fist  —  ultimately reflect, rather more than reflecting on, the continued tensions surrounding reconciliation in Northern Ireland.