by Keith Payne. This text may be archived and redistributed both in electronic form and in hard copy, provided that the author and journal are properly cited and no fee is charged for access. 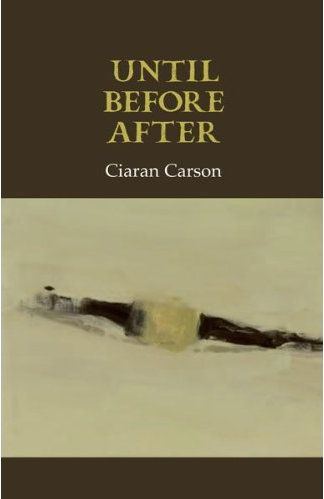 Until Before After by Ciaran Carson.

If you were to greet the principal narrator of Ciaran Carson’s recent collectionUntil Before After on the street with a friendly “What’s the story?” you would be forgiven for turning again at the response. For his is a convoluted tale, with “skein becoming/ ball the yarn// spun into what/ comes next,” the whole “unravelled// until ravelled/ into skein” (“Reconfigured”). Nothing is what it seems here. There has been an explosion and the unnamed narrator is left pitching on the boom of the explosion’s wake. Set in three sections, each with seventeen sets of three poems, Until Before After, among other things, is the narrator’s attempt at reaching the stability of the “seventeen steps” of a hoped for homecoming. Then again, since this is the pitch of a Carsonian tune, he may just nod and reply “sound” after all.

The bomb dropped is a piece of news that wrenches the narrator apart. Everything is out of tune, off kilter. He turns to face a babble “of building blocks/ bricks and rubble,” (“A babble”) The turn is as much a backward look as a turn in the tune of the poems, or as Carson writes: “some of the poems [in this collection] depend on the terminology of Irish traditional music, where the first part of the tune is often called ‘the tune’ and the second part ‘the turn.’ A haiku-like turn if you like, where five bars ‘in it takes/ a turn into// a darker cadence/ that alters how it// began.” (“Five bars”) The turn gives recourse to cast back over what was until the “almost/ mortal blow,” (“For all that”) weaving back through the “warp of words,” (“Cast a spell”) and passing through the threads of the story.

The story takes place, for the most part, in small, interior spaces; hospital wards, halls and thresholds, hospices and empty rooms where “In your absence,” the narrator is left “wandering from/ room to empty// room,” with “time measured/ footfall by footfall.” (“In your absence”) The measuring of time; before, until and after, is the measure of the poetic foot negotiating the aftermath, the poetic form striving to find a foothold. But in “swathe after swathe” of aftermath, this can be like trying to “scale a twisted/ sheet dangling// from one/ shuttered window” (“As in a wall”).

If you imagine for a moment a pebble dropped into a well as the event, it sends out ripples from itself; the aftermath. After some space of time the ripples meet the surrounding walls of the well and turn back in on themselves; the unexpected turn in the tune. Since this is Ciaran Carson’s ear to which we are tuned, the aftermath is a sonic boom, a linguistic fallout, one that gives the reader recourse to the OED, for all is not what you may think with Carson. To give just one example: the surprising appearance of “calculus” in one of the poem titles gives a Latin etymology of “small pebble,” the very same pebble that is dropped in the well, and so back we turn into the story turning in on itself. This is not mere lexical trickery, more serious fun; a telling of the beads. Recalling the visitation from On The Night Watch, Carson’s previous collection,  where “The Day Before:”“three journeywomen/ cloaked in black//  came to my door/ armed with distaff // scroll & shears/ one to spin// one to span/ one to snip,” we are reminded that for Carson, the life and the story of the life become one and the same thing. Although, more often than not, the story is what goes on after you have “passed over// to the unseen world” (“An airman”). The three journeywomen incidentally are the Three Fates, daughters of Night who measure, spin and snip the story of your life.

We must also remember that Carson’s narrators are almost invariably urbanites, pedestrians traversing and textualising the city in their preambles. Quoting Michel de Certeau in his essay ‘‘‘Walking in the city’: space, narrative and surveillance inThe Irish for no and Belfast confetti,” John Goodby tell us “in his essay ‘Spatial Stories,’ he [De Certeau] observes that in modern Athens the vehicles of mass transportation are called metaphorai and that ‘Stories could also take this noble name: every day they traverse and organize places; they select and link them together; they make sentences and itineraries out of them.’’’ (John Goodby inCiaran Carson: Critical Essays, ed. Elmer Kennedy-Andrews, Dublin: Four Courts Press, 2009. pp.66-85.) What links the stories here is the death, or deaths of loved ones. And yet this story also deals with a near death, walking us right us up to death’s door, but never across the threshold which “is but/ a frame// of words and not/ the thing// itself if thing/ it be” (“At death’s door”).

Carson’s work until now has managed to exhaustively textualise the city of Belfast yet it seems that here he has spun the story into a knot. There are things that simply cannot be told. The story of those who have “passed over” can go no further. Their story can only turn back on itself, following the turn in the tune. There exists then, a city within a city. It is inhabited as much by those who have “crossed over” as by the shadows of your memory, shaded by the poetic feet as they fall into place. This shadow city is the alternative possibility opened up by Carson’s poetic construction; it can be glimpsed just beyond the linen backing, between the interstices of remembering and “remembering remembering”, filled with the many might have beens, or for all you knows. It’s a shadow of the city, and story, that you knew, or that you thought you knew.

In essence, this is the Meta-City of Carson’s own glass bead game – a game that has incorporated over the collections cartography, science-fiction, traditonal Irish music, botany, herbology, the Rev. Dineen’s Irish Dictionary, the OED, Golden Age Dutch and Flemish painting, philosophy, spiritualism, fountain pens and a heady brew called Shamrock Tea. It is a fully connected mnemonic matrix, the continuous present of the poem which demands absolute attention, Zeno’s poem if you like; while still in flight. Carson’s great skill is to lead us into such a complex narrative world and not lose either himself or us between the cracks that open in the pavement. He manages to navigate his way through the city, his eye following “the route from/ gutter pipe to// window sill to/ overhanging// cornice to/ window sill to// parapet to/ rooftop ever// after scaling/ one’s mind// by footholds not/ there until” (“The eye”). Until, from hospital room he returns home where

“I open the door

so slowly I bring

step by step up