by Irene Gilsenan Nordin. This text may be archived and redistributed both in electronic form and in hard copy, provided that the author and journal are properly cited and no fee is charged for access. 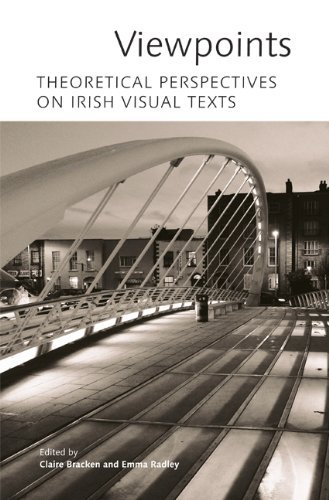 This collection sets out to provide new points of view in Irish cultural studies by presenting a range of theoretical positions that follow the trend of recent scholarship in Irish Studies, adopting a “holistic” approach to Irish cultural representation. Such an approach is indeed very welcome in the Irish critical landscape as it re-examines established discursive practices and offers a broader scope of theoretical paradigms that otherwise have been neglected in traditional criticism. In the introduction to the collection, the editors commend the views promulgated by scholars such as Patricia Coughlan, Elizabeth Butler Cullingford, Colin Graham, Geraldine Meaney and Joseph Valente, among others, for their desire to “disrupt established frameworks.” They then cite from the introduction to Irish Postmodernisms and Popular Culture, where the editors of that collection, Wanda Balzano, Anne Mulhall and Moynagh Sullivan, refer to the “suspicion of theoretical paradigms” that has been the legacy of the primarily neo-Marxist and post-colonial approaches to Irish studies, established by the Field Day Project. According to Balzano et al., this suspicion was directed at theories other than those of the narrow and limiting established ideology, and dismissive of new paradigms for perceiving Irish identity, since these theories were considered “complicit with the corrupting influences of globalization itself” (10). The theories listed in this category include feminism, psychoanalysis, phenomenology, philosophy and queer theory, theories which the editors present in this collection with a view to providing more pluralist approaches to contemporary Irish culture.

The cultural landscape that is sketched at the beginning of the collection, whilst set against the backdrop of the debilitating effects of the fall of the Celtic Tiger in 2008, and the ensuing economic collapse, visualizes a surprisingly vibrant Ireland. The first visual image that is given is that of the Discover Ireland advertising campaign from 2010, with a picture of contemporary Ireland as a “bright, multicultural, family-friendly, seductive and fun-filled visual place” (1), where images of surfers, hikers, and happy, smiling people engaged in similarly untraditional Irish pastime activities are juxtaposed with images of the traditional aesthetic of “old” Ireland. Launched in the wake of the Icelandic volcanic ash cloud, and the resulting disruption to air travel across western and northern Europe, which took place in April 2010, the Discover Ireland advertisers hoped that the campaign would encourage Irish citizens to stay at home and take a so-called “staycation,” rather than heading off to more exotic lands for their holidays. The image alluded to here is that of a cultural space that is in the process of redefining and rearticulating itself, and the collection itself aims to examine this process and carry out the well-timed task of exploring these visual representations of Irish cultural life, both past and present.

Consisting of fourteen essays by a wide variety of researchers from various fields of Irish studies, the main questions posed in the collection are how iconic cultural currencies are perceived, what kind of ideological frameworks are used in imagining Irishness, and if these frameworks can be imagined differently (3). The collection is divided into three sections: discourse, form and identity, with each section focusing on different aspects of visual culture. The section on discourse concentrates on exploring new paradigms to analyse image-based texts, and new methodologies relating to how visual texts are coded both in Irish culture and Irish critical discourse. Thus the aim is to establish a relational link between the texts and the discourses in which they are read. Two very interesting essays in this section are by Cheryl Herr and Barry Monaghan, both of whom focus on narrative as experience, rather than narrative as meaning. Herr uses as her starting point the concept of “habitus,” as outlined by Pierre Bourdieu, in her study of Thaddeus O’Sullivan’s The Woman Who Married Clarke Gable (1985), a film nominated for a BAFTA Film Award for Best Short Film in 1986. (One needs to overlook here the misspelling of Bourdieu and the incorrect date for the release of O’Sullivan’s film, given by the editors in their introduction). While Herr’s comment that the film has received little commentary since may have been accurate at the time of writing, 2013 saw the reissue of the digitally re-mastered film, together with the screenplay and a collection of critical essays, in the volume The Woman who Married Clark Gable: Thaddeus O’Sullivan, edited by Lance Pettitt and  Beatriz Kopschitz Bastos (Sao Paulo, Brazil: Humanitas 2013). Herr demonstrates that the established primarily psychoanalytic interpretation of the film can be usefully supplemented by a reading that places social practices at the centre, exploring how the camera focalises a “socially embedded way of being” (29). Herr’s application of the Heideggerian concept of Dasein admiringly underlines the simple everyday triumphs over characters’ personal desires and motivations, reminding us that Irishness is not a given condition that can be described at any given time, but rather a “continual participation in a world that is always being made and unmade before our eyes” (41). Barry Monaghan explores what he terms the “phenomenological narrative shift” in two feature-length films by Lenny Abrahamson: Adam & Paul (2004) and Garage (2007), and considers the manner in which meaning-making takes place, suggesting that the specific qualities of each film invite two very different modes of presentation. Monaghan convincingly argues that in terms of cinematic coding, while Adam & Paul is presented in Beckettian mode and “plays with language as poetic game” (56), Garage engages with more existential issues. Thus the essay demonstrates the so-called dramatic shift by Abrahamson from conventional cinematic coding in the earlier film to a certain “empowerment of spectatorship” (56) that focuses on the film’s relationship with the world, as presented in Garage.

The second part of Viewpoints: Theoretical Perspectives on Irish Visual Texts deals with form, in terms of the related concept of intertextuality and how the visual is represented in the interaction between theme and form. Emma Radley, in her psychoanalytic analysis of the Irish horror film genre, adopts the linguistic theories of Julia Kristeva, and examines the Irish horror film in the context of Kristeva’s theories of the semiotic. By exploring the signifying space that emerges when national and genre are combined, Radley suggests that genre in the context of the national cinema is “refigured” to become a dynamic force that is disruptive of the symbolic discourse. Thus, she interestingly argues, a rupture is created which produces a new discursive site, a rupture that is – as she explains in true Kristevian terminology – “intertextual, heterogeneous and profoundly ‘in-process’” (111). In contrast with the nostalgic image of the “simple peasant” presented in some American films, such as The Quiet Man (John Ford, 1952), Darby O’Gill and the Little People (Robert Stevenson, 1959) and Waking Ned Devine (Kirk Jones, 1998), Radley convincingly argues that Irish horror films, such as Shrooms (Paddy Breathnach, 2007), Dead Meat (Conor McMahon, 2004) and Isolation (Billy O’Brien, 2005), deconstruct and challenge the rural ideal of Ireland that appears in traditional signifying structures, creating a potential space of signification that allows new forms of representation to emerge.

The final section of the collection addresses representations of identity, with essays including Colin Graham’s insightful analysis of representations of identity in Irish photographic artists Joe Duggan, Hannah Starkey and John Gerrard, and Claire Bracken’s excellent study of the construction of modern identity in Deirdre O’Kanes’s characters, Helen and Lorraine, in two television series, Paths to Freedom (2000) and Fergus’s Wedding (2002). Bracken deftly draws on the theories of feminist philosopher Luce Irigaray to demonstrate that the cultural construction of post-feminist womanhood, as depicted by both these characters, is a product of phallogocentric capitalism, which – as she puts it – deploys the feminine “as object of support for a neo-liberal economy that continues to value masculinity as the dominant marker of power” (171). Bracken concludes that critiques of capitalism in Ireland need to carefully consider feminism and gender in relation to structures of representation, otherwise the traditional image of “woman as symbol-support of the nation” that has been central to Irish national discourse from colonial times to the time of Celtic Tiger will endure (183). Jenny O’Connor’s essay is an interesting analysis of the concept of “becoming woman” in Neil Jordan’s films, in which she offers new perspectives on the philosophical nature of Jordan’s cinema. O’Connor sets out to demonstrate that the theories of Deleuze and Guattari focus a discussion on the “possibilities and potentialities of mixtures, hybrids and in-between spaces, as they attempt to move beyond phallogocentrism” (200), and convinces the reader that such an approach is indeed effective. The essay concludes that while Jordan may be accused of establishing the “wo/man (rather than the woman” as the destabilisation of the patriarchal order, he still manages to put forward, as O’Connor very elegantly declares, “the power of the hybrid, the possibility of the rhizome, the potential of the multiple to unsettle the binary rationality by which we live” (214).

Two of the essays in this final section address films already examined in sections one and two of the collection: Zélie Asava’s essay on race and gender in the mixed-race female heroine of O’Brien’s Isolation and Boy Eats Girl (Stephen Bradley, 2005), and Fintan Walsh’s essay on representations of the self in an analysis of “queer representational aesthetic,” in Abrahamson’s films Adam & Paul and Garage. These essays are well-argued and well-presented, and offer new insights on the works in question. However, even if they adopt different approaches to those adopted by Monaghan and Radley in the essays on the same films presented earlier in the collection, one wonders if the editors could not have used the opportunity to broaden the scope of the collection and focus instead on other works.

Viewpoints: Theoretical Perspectives on Irish Visual Texts is generally an exciting and very worthwhile collection that imaginatively reflects a changing dynamic Ireland and offers new ways of perceiving the cultural discourses that these changes have created, at the same time as it examines present ideological frameworks and explores how these can be envisaged differently. The editors, Claire Bracken and Emma Radley, have succeeded admirably in bringing together an entertaining mix of essays, focusing on visual cultural narratives, that show an openness to different representative perspectives and give the reader rewarding new insights into visual representations of Irish cultural life, both past and present.