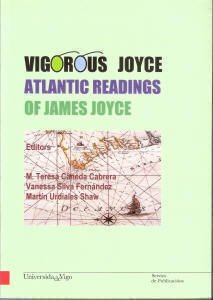 The title of the volume invokes again the Atlantic and Celtic ties with Ireland, the “sister land”. As explained in the preface, the Vigo/Joyce relationship reached its culmination in April 2008, when the University of Vigo hosted the 19th annual conference of the James Joyce Spanish society. But before that, Joyce had disembarked metaphorically in Vigo, one of Europe’s busiest harbour cities, in 1926, when bonds with him were established with the translation of fragments from “Ithaca” and “Cyclops” into Galician. Therefore the title pays homage to the first Joyce’s readers on this part of the Atlantic. The volume gathers a selection of fifteen essays divided into five sections, which include papers given at the conference together with the contributions of reputed international Joyce scholars

Central to the first section — Contexts, Discourses and Affiliations — is the identification of the factors that have contributed to the conformation of the often contradictory Joycean affiliations. John Mc Court’sinteresting  paper on “Joyce’s Irish Post Mortem, 1941-1943” analyses the mixed reactions after his death  through a detailed study of the press of the time — main attention is given to Elizabeth Bowen’s homage — and emphasizes the long oblivion Joyce was to suffer until the 1960s. Maria McGarrity analyses in “Joyce, Irish Modernism and the Primitive Other” the degree to which Joyce uses the primitive as a means to identify and question Irish cultural positioning both at home and abroad. Finally, Katherine Mullin’s  “Ulysses and A Portrait of the Artist as a Young Man Through the Little Magazines” discusses the important relationship of Joyce and two little magazines, The Egoist and The Little Review, tracing their development and the different audience they aimed at.

Section 2 gathers three essays on the topic of Textual and Cultural Negotiations, dealing with the  different strategies through which Joyce is appropriated and rewritten. In her valuable essay “The Translator’s Net: The World as Word in A Portrait of the Artist as a Young Man” M. Teresa Caneda Cabrera approaches the important issue of translation in A Portrait of the Artist as a Young Man and proclaims that the inability to reproduce Stephen’s negotiation between world and word lies in the neutralization of the political power of Joyce’s language and style. She focuses her study in Dámaso Alonso’s translation of the book. Susana Pérez Pico’s “The Paradox of ‘The Dead’: from Modernist Narrative to Classical Film” opposes the discursivization of Joyce’s work with the cinematic techniques. Whereas in the final paper, entitled “Double-Edged Words: James Joyce and Contemporary Irish Women Poets” Vanessa Silva Fernández chooses the Penelope episode to trace similar negotiations of gender in the work of contemporary women poets who dare to express “words deemed to remain silent”. She deals with the work of Eavan Boland, Nuala Ní Dhomhnaill and Katie Donovan, concluding that Molly Bloom was an invaluable source for further female self-assertion.

Section 4 — Language and Myth — proves to be one of the most interesting of the book dealing with two of the main generators of meaning for readers: the intertextual and extra textual links provided by language and Myth. As outstanding contributions we should mention  Margarita Estévez-Saá’s fine essay “The voce of Shaun, vote of the Irish, voice from afar” which approaches the character of Shaun in Finnegans’ Wake, following the traces of  Boucicault and Carleton as his antecessors. Another brilliant  paper  is  “Vico and  Vigo en Finnegans Wake: confluencias y ramificaciones” by Francisco García Tortosa, who  disentangles new levels of meaning inFinnegans’s Wake as he explores the allusiveness of language in the echoes and reverberations of the name of Earwicker. Attention to language is given by Rafael I. Garcia León in “Antanaclasis Joyceana en Ulysses”, carrying out an analysis of Joyce’s use of repetition.

Reading Joyce is an activity which demands a plurality of insights, from a single word or a phrase to the entire corpus of texts and to the history which such texts belong to.  So section 5  — Influences and Convergences —establishes links between Joyce and other writers, either  antecessors  or followers such as the interesting article by Anne MacCarthy,  “James Joyce and James Clarence Mangan”, which  succeeds in  drawing the crucial  influence of  Mangan on Joyce and the latter’s admiration for the former. Jose Manuel Estevez-Saá  “Más que ecos joyceanos en “Two More Gallants” de William Trevor” seeks  some Joycean echoes in  William Trevor. Joyce is explored in greater depth by José Ruiz Mas in “Carlos Eduardo Zavaleta y la traducción peruana de Pomes Penyeach” as an international icon focusing on the translation of Pomes Penyeach by Latin American writer Carlos Eduardo Zavaleta .

Taking into account the complexity of reading Joyce, the essays’ quality is irregular — as usual in a volume of this kind —, and not all of them  should  be considered scholarly contributions, but as a whole the book  illustrates Joyce’s inexhaustibility and reading is praised as an ever renewed activity which implies research, and leads — at least hopefully — to enjoyment. The well written introduction is full of convincing reasons to join the network of Joycean criticism but, above all, invites us to repeat Stephen Dedalus’ words when walking on Sandymount strand: I am here to read.