What Richard Did (Lenny Abrahamson, 2012)

What Richard Did (Lenny Abrahamson, 2012) 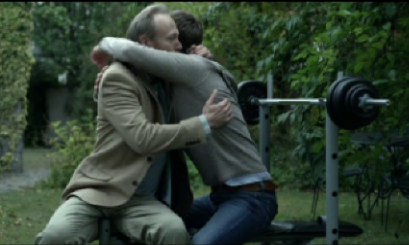 Spoiler alert − this review gives away plot twists for What Richard Did, Herman Koch’s novel The Dinner (2012) and Christos Tsiolkas’ novel The Slap (2008).

Lenny Abrahamson’s third feature is something of a departure from the dark, low-key comedy ofAdam and Paul and the mournful, quasi-spiritual tone and tenor of Garage. Interestingly, the director also shifts his focus from male characters more frequently understood as problem social categories than actual people (drug users, marginalised rural men) to a social milieu in which the privileges of white, middle-class masculinity are entirely taken for granted. What Richard Did is based on Kevin Power’s 2008 novel Bad Day in Blackrock which was, in turn, inspired by the Brian Murphy case, in which an 18-year old boy was beaten and kicked to death by school friends outside a Dublin nightclub in August 2000. Reviews of What Richard Did were overwhelmingly positive in both the Irish and the British press, and it recently won five IFTA awards out of a total of 10 nominations, including Best Film, Best Director, Best Script (Malcolm Campbell) and Best Actor (Jack Reynor).

Set in an affluent Dublin suburb, the story begins with the somewhat mundane adventures of ‘super-rich’ kid Richard Karlsen and his friends in the summer between finishing school and starting university. When a fight with Conor, Richard’s rival for Lara’s affections, ends with the former beaten and left to die alone on the street, however, Richard’s moral universe begins to implode as it gradually dawns on him that there will be no punishment or repercussions for what he did. On the contrary, his father and friends immediately move to cover up for him, and he is packed off to the family beach house until the whole incident blows over. There Richard is left confused and rudderless to contemplate the future which his parents are so desperate to protect.

The film has been read as both indexing and allegorising the moral nirvana of the post-Celtic Tiger era. Sight and Sound reviewer Hannah McGill points out that, “The sole offer of help comes to Richard from his Danish father (Denmark helped to bail Ireland out with a €400 million bilateral loan in 2010)”, also commenting that, “the film frames this approach not as a reliable lifeline but as temptation to retreat further from hope; Richard’s father doesn’t help him to do the right thing but encourages him to sidestep justice.”1 Indeed, it may well be Abrahamson’s adroit allegorical framing of the financial crisis not just as economic or local but also as moral and universal that explains the film’s resonance with audiences both within and beyond Ireland. In this sense, What Richard Did displays significant continuities with a particular sub-genre within both cinema and literature that is concerned with the emotional aftermath of and middle-class response to ostensibly random acts of male violence, including Dutch author Herman Koch’s best-selling novel The Dinner(2012), Lionel Shriver’s We Need to Talk About Kevin (2003), Christos Tsiolkas The Slap (2008) andChristopher Wakling’s What I Did (2011).

Much of the reviewer commentary around these novels and their filmic / TV adaptations has tended to focus on the dynamics of the middle-class (post)modern family and questions of liberal parenting and political correctness. Like The Slap (2008) and The Dinner (2012), What Richard Did is preoccupied with the moral crises experienced by the characters after the event rather than with their motivations. And, like The Slap and The Dinner, it is also a scathing critique of middle-class morality, which shows a level of self-interest and individualism among the bourgeoisie that is practically indistinguishable from pre-democratic feudalism. In this neoliberal scenario, intersectional politics and group solidarity effectively disintegrate when the interests of the nuclear family − and by extension neoliberal capitalism − are threatened. The louder the gutless parental figures of these narratives rant about protecting their young, the greater their exposure as failing/betraying the next generation.2


What Richard Did thus departs significantly from the types of concerns and debates that surrounded the original Brian Murphy case, which focused predominantly on the causes and nature of young male violence. Indeed, audiences in search of sociological explanations for why Richard did what he did may well have been disappointed. There is no smug, port-swilling father bullying him toward alpha-malehood, no botoxed mother on Prozac, no glaring insights into the intensely homophobic (but simultaneously ‘dangerously’ homoerotic) and hierarchical culture in which boys are socialised, no parsing of the dog-eat-dog competitive individualism of schools rugby and none of the casual racism, classism and misogyny that so famously lampoons the Dublin 4 milieu’s crass sense of entitlement in the Ross O’Carroll-Kelly books. By contrast, Richard’s parents are benevolent, bohemian in an impeccably cultured way and as understated as the taupe-inflected décor of their home. The only clue we are given as to why such a seemingly contented young man went temporarily off the rails is, therefore, the suggestion of his father’s limp liberalism and lack of paternal authority.

This stands out in sharp contrast to the portrayal of the father figures in texts such as The Slap andThe Dinner, beneath whose middle-class respectability anger and the potential for violence constantly simmer. Harry in The Slap, we discover, has brutally beaten his wife in the past and is the son of a man who was constantly angry. When he majestically proclaims to his nonplussed son that one day his entire ‘kingdom’ will be Rocco’s, we cannot help but wonder whether this inheritance will also include Harry’s proclivity for violence. In The Dinner, we eventually discover that Michel’s father is an unreliable narrator who has been prone to outbursts of apparently inexplicable violence and that, beneath the tolerant veneer, he harbours deep-seated misgivings about what he clearly perceives as the excesses of Dutch liberalism, as well as intense jealousy of his brother’s success as a politician. While this information is subtly woven into the narrative, it helps explain why Michel and his friend burn a homeless woman to death in an ostensibly random act of violence. Dirt and disorder are seen to pose some unspeakable threat to the integrity of the middle-class family, and Michel’s behaviour can only be understood as somehow related to his father’s suppressed loathings.

Violence in these narratives is not linked, therefore, with a violent media culture or associated with populist accounts of ‘youth out of control’ but is attributed rather to dysfunctional patriarchs out of kilter with the modern world. In the case of What Richard Did, however, Richard’s father appears to be entirely at ease with modernity and it is the absence of paternal authority that seems to be at the root of Richard’s moral dysfunction. Interestingly, this dovetails with a certain type of commentary on masculinity and violence that was prevalent at the time of the Brian Murphy case. Irish psychologist Maureen Gaffney was especially outspoken in attributing the upsurge in this type of male violence to a “collapse of the old authority structures” which, she claimed, allowed young men’s ‘natural’ testosterone-fuelled aggression to go unchecked and untamed:

We have forgotten that social structure is what protects males from the volatility of their nature … The young males of all primate species indulge in heart-stopping risk-taking and experimentation … The peak of aggressiveness and antisocial behaviour occurs in the late teens and early 20s, corresponding to the peak of testosterone at that age.3


Jim Sheridan evoked a similar discourse when he commented (in relation to In the Name of the Father) that:

Absent from these accounts − and arguably also from What Richard Did − is the possibility that the ‘social structure’ might in fact be responsible for constructing the ‘volatility’ of young men’s ‘nature’. Although the socialisation of the boys is hinted at when the coach draws them together to sing the team’s mascot song, there is little analysis or explanation of this process. In this respect, the film leaves itself open to readings of masculinity as essentially or naturally violent without the stabilising influence of traditional paternal authority. This is a phenomenon which other Irish filmmakers have − almost without exception − savagely critiqued as one of the darkest and most destructive aspects of Irish culture. It is precisely Abrahamson’s lack of step-by-step pedanticism and reliance instead on mood, texture and rhythm that make him the most confident and sophisticated filmmaker in Ireland today. As a class-based critique of middle-class morality, What Richard Did is exceptionally sharp, balanced and nuanced. When viewed through the lens of masculinity, however, it is an inconclusive meditation on the nature of male violence which resonates uneasily with essentialist, ‘boys will be boys’ accounts of manhood. Abrahamson’s refusal to explain Richard’s motivations is frustrating, perhaps because − if the film is read more as personal drama than allegory − the spectre of the Brian Murphy case and of current debates about young male violence continue to cast a very real shadow over this work of fiction.

Thanks to Cormac O’Brien, School of English, Drama and Film, University College Dublin.