by Nicholas O'Riordan. This text may be archived and redistributed both in electronic form and in hard copy, provided that the author and journal are properly cited and no fee is charged for access. 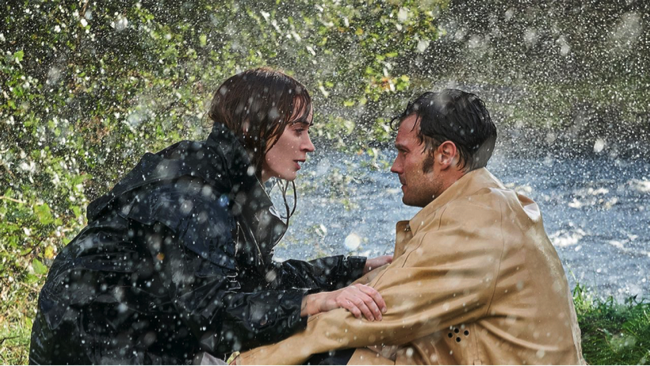 Cinematic representations of Ireland have predominantly been the output of foreign filmmakers, undoubtedly influencing the approach to representation in many films. While many aspects of the filmic representation of Ireland and the Irish have been criticised including images of violence, the recurrence of the “stage-Irishman”, and the romanticisation of the Irish landscape, no aspect of Irish film has been subject to more sustained and common popular criticism than the representations of Ireland’s accents. This perceived mis-representation of Irish accents has become particularly synonymous with American representations of Ireland. In fact, American films set in or about Ireland, such as The Quiet Man, Leap Year and P.S. I Love You, are commonly known to Irish viewers as “Oirish” films, with phonetic spelling marking the perceived stereotyping of accents often heard in such texts. A Google search of the words “Irish”, “Accent”, and “Film” generates pages upon pages of recent critiques of performances of Irish accents in film such as The Worst Irish Accents in Hollywood Movies,1 Top 10 worst Irish Accents in Movies (Wickham), and The 12 Absolute Worst Irish Accents in Movies Ever (Demolder), while television, radio and national print media often create content criticising accent performances in Irish film.

While lists such as these appear online and in print media every march around St. Patrick’s Day, the performances referenced are invariably pre-2011, with a majority from the 1990s. In response to the proliferation of bad accent lists, many commentators have noted that “overseas actors have got steadily better at proper Irish accents”, with several lists published recently commending “great” recent Irish accent performances. While criticised performances are increasingly a thing of the past, responses to 2020’s film and television has reignited the moral panic surrounding Irish accents in film. While the year saw Irish audiences praise British actors Daisy Edgar-Jones in Normal People (Element Pictures, 2020), Cosmo Jarvis in Calm With Horses (Nick Rowland, 2019), and Tom Glynn-Carney in Rialto (Peter Mackie Burns, 2019), the latter months of the year saw widespread dismay at accent performances in the trailers to Wild Mountain Thyme (John Patrick Shanley, 2020), and to a lesser extent, Pixie (Barnaby Thompson, 2020).

On the release of the Wild Mountain Thyme trailer in November 2020, social media interest in the film’s accents grew quickly. Primarily perceived as perpetuating tired Irish-American “stage-Irish” film tropes, the trailer’s accents generated responses of anger, confusion, and humour. High profile examples of these humorous responses included Dublin Airport tweeting “There’s a fashion police, grammar police, we even have airport police. Is there such a thing as accent police? If so, somebody better call ‘em”, and the Leprechaun Museum, Dublin tweeting “Even we think this is a bit much”. Media outlets including Euronews, BBC, and The New York Times reported on this growing negative reaction to accent in the film, quoting social media users’ comments and reminding the reader of previous controversial Irish accents in film. Irish media interest was particularly prolific, and at the time of writing, between The Irish Independent, The Irish Times, and The Irish Examiner, 20 articles on the reactions to accents in the film have been published, with many other outlets similarly publishing multiple articles on the subject.

Adding to the discourse surrounding the film’s representation, in an interview with Variety, Wild Mountain Thyme’s Irish-American director John Patrick Shanley noted he was “not making this movie for the Irish. [He was] making this movie for everybody else and all the people who want to go to Ireland” (Murray). Although many factors influence accent performance and accent reception, “misperformed” accents are often perceived as an issue which occurs almost exclusively when Irish accents are performed by non-Irish actors.2 However, this perception is disrupted somewhat by responses to Irish actor Jamie Dornan’s accent performance in Wild Mountain Thyme. In defence of the film’s accents, Shanley argues that “if the characters sounded exactly as his relatives spoke, no one would understand them”, stating that “[y]ou have to make the accent more accessible to a global audience” (Murray). This approach to accent is not a new one. Many directors, producers and actors have equally expressed this motivation to “tone down” regional accents. Actor Minnie Driver, in an interview on RTÉ’s The Late Late Show in 1995,3 notes a pressure from studios to “tone down” accents in Circle of Friends (Pat O’Connor, 1995), stating “Hollywood was like, you know, “we can’t have a [The] Commitments, nobody could understand a word they were saying” (that film, released four years earlier, utilises a range of north Dublin accents often perceived as more regionally marked).4 Many Irish actors working outside of Ireland, including Jack Reynor and Alan Smyth, have expressed similar motivations to “tone down” accent. In what could be read as support for such approaches, in the weeks after the release of Normal People, several media outlets published articles on American viewers’ “admitting” to watching the show with subtitles, with many viewers using subtitles to interpret the regional Irish accents in the text. Similarly, British audiences have reported similar issues in the accent performances in The Young Offenders this year, and in recent years the Netflix global release of Derry Girls led to similar articles.

The process of “toning down” accents for audiences can be read as a form of Hollywood’s “self-dubbing”, whereby the “English will be spiced with some of the accent and idioms of the original language to foreground that the characters are foreign” (Kozloff 81). In Hollywood cinema, “given the pressure on filmic speech to help carry the narrative forward, the presence of non-English speaking characters creates a conundrum” (Kozloff 80) and while in the current context, we are not dealing with two disparate languages in the traditional sense, many of the same operations are at play in the current context. Writing on the US same-language dubbing of Mad Max, whereby the studio “sought to assimilate cultural difference by removing its regionally Australian English”, Tessa Dwyer draws upon Hamid Naficy in arguing that “this process opened up a new cross-cultural space or arena, imbuing the film with additional, unintended layers of meaning [providing] pleasurable opportunities to speak back to films by renegotiating meanings and cultural references” (150). While Hamid Naficy points to the moviehouse as primary site of this negotiation (183-202), the space of exhibition for the Wild Mountain Thyme trailer was largely social media. Users voiced anger, frustration, humour, and bewilderment at the trailer’s accents with many further disseminating the video accompanied by comments often exaggerating the accents in the trailer. Other users produced re-dubbed, or home-made versions of the trailer, or parody audition tapes in stage-Irish accents. Since the film became available online in some regions several Twitter users, including popular Irish novelist Marian Keyes, have humorously live-tweeted their first viewing, with more online watch-along parties planned for, at the time of writing, the upcoming official Irish release of the film.

Due to the history of perceived misrepresentation and the proliferation of such accent criticism, accent is almost always addressed in any Irish media review of a film with a non-Irish actor performing a role. Three weeks prior to the release of Normal People, Bustle ran an article which looked ahead to the adaptation of Rooney’s “much-loved novel”. Noting that the “Irish accent is notoriously difficult to master for most people not hailing from the emerald isle. As an Irish woman, I can certainly attest to this” (Hanna). This article pre-emptively opens up questions of accent performance in the adaptation due to a history of challenged accent performances. While a common popular perception is that Irish accents are relatively difficult accents to perform, many performers and accent coaches disagree with this, as renowned Irish accent coach Brendan Gunn asserts: “the idea the Irish accent is too hard to replicate is a myth” (Horgan). As Christopher Holliday notes, the “ability of an actor to adopt a specific national dialect has been imbricated within what Paul McDonald labels “the spectacle of prestige performance” and the “show of actorly craft” (Holliday 66), conditioned by “personal commitment” and this year, actors Edgar-Jones, Jarvis, Glynn-Carney, Ben Hardy, and Olivia Cooke have all received acclaim for their accent performances, with audiences often expressing shock upon hearing each actor’s “real” accent. During promotions duties for their respective texts, each of these actors were asked actors about their Irish accents, with several noting the pressure to “get it right” due to awareness of the host of “worst Irish accents in film” lists, and the often negative reactions these performances receive from Irish audiences. Interestingly, while the stars of Wild Mountain Thyme discussed their preparation for accent performance in the film, the film’s accent coach, the aforementioned Brendan Gunn, noted that he did not meet with the cast in person, with producers opting to rely on recordings he had made for them (Horgan). Gunn explained that “this rarely works […] It’s the first time in my career that I didn’t get to speak to the cast which I found most unusual” (Horgan). While perceived accent issues cannot to attributed solely to this, it does demonstrate the differing approaches of film productions to accent performance.

While cinematic representations of Ireland and its accents have often been met with criticism, the extent to which Wild Mountain Thyme’s accents have sparked discussion and how this discussion was so widely reported on, is unprecedented. Although, as Kevin Rockett noted in 2012, “[t]here has [sic] been far more films made about the Irish by American’s [sic] than the Irish themselves” (Hall), a growing wave of indigenous Irish productions works to redress this balance. Representing images of Ireland far removed from the “picture postcard” images of classic Irish American cinema, this wave of filmmakers, as I have noted elsewhere (O’Riordan “Don’t Use”, “The Voices”), have increasingly utilised accent politics as central to various aspects of texts. Ruth Barton notes that “[i]t’s not that long ago that we were fighting to take control of our own image and tell our own stories and we still take it badly when other people claim to speak on our behalf or try to claim our identities” (Maguire). As the space of exhibition, distribution, and discussion for these trailers, and increasingly, films, social media facilitates a playing with texts, mediating their distribution and reception by other viewers in real time, “transform[ing] the cinema’s “work” from one of hailing to haggling” (Naficy 191). Although there remains a situation whereby in some representations of Ireland “language becomes merely functional as the inherent subtleties of accent are sacrificed in order to make Irish films as accessible as possible to international audiences” (Crosson 10), the wealth of contemporary indigenous Irish film and screen media serves to lessen the impact of such contested representations on the national cinema.

2 While rare, performances of Irish accents by Irish actors including Liam Neeson and Pierce Brosnan have been met with criticism.

4 Interestingly, The Commitments played on the linguistic distance with by releasing A Tosser’s Glossary, a guide to slang terms mentioned in the film, as both humorous souvenir and as a translation device.

Holliday, Christopher. “The Accented American: The New Voices of British Stardom on US Television.” Journal of British Cinema and Television 12. 1 (2015): 63-82.

Horgan, Niamh. “‘I can’t be blamed for those accents – I didn’t even get to speak to the cast’ says Wild Mountain Thyme voice coach.” Irish Independent. 10 January 2021. https://www.independent.ie/entertainment/movies/movie-news/i-cant-be-blamed-for-those-accents-i-didnt-even-get-to-speak-to-the-cast-says-wild-mountain-thyme-voice-coach-39951627.html