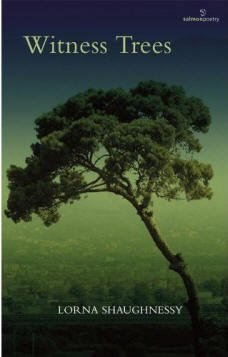 Witness Trees is Lorna Shaughnessy’s second book of poems after the collection Torching the Brown River (2008), also published by Salmon Poetry. Moreover, she has experience in the translation of contemporary Mexican poetry, as her books with poems by Pura López Colomé and María Baranda (both in Arlen House, 2006) attest. In fact, Shaughnessy’s writing is a paragon of border-crossing, from the North to the South of Ireland, from the island to the European mainland and, across the ocean, over to the American continent. An exclusive focus on the familiar terror of a violent North might prove to be too ensnaring, so she also incorporates into her poetry the experience of those who struggle for life in the world’s remotest corners.

Witness Trees is a book about surviving a traumatic past. The author provides two different sources for the title of the collection. A poetic reference, Robert Frost’s “Beech”, connects the Witness Tree with the need to bear witness to past wounds (25). The second source is explained in the epigraph of the title poem “The Witness Trees”, where Martin Jacoby describes the characteristics of this conifer: the tree that survives the passing of a dune grows bigger, becomes more productive and its seeds inherit its remarkable performance. Shaughnessy is fascinated by the resilience of these “testigos”, the umbrella pines in the Doñana Nature Reserve in south-western Spain: “They reach down into unsuspected sources / and root, stretch towards an intuited light. / As the sand rises they keep their heads above land / and remember to grow” (40). The first line break in this quotation is a perfect example of how syntax and lineation match the subject matter, as the reader becomes involved in the struggle of the tree to find a firm rooting place.

This book collection is divided into three parts: I. Rebuilding, II. Witness, and III. Survivors, a structure that unsettles the cause-effect expectations about witnessing in the first place, surviving next and, finally, rebuilding. Shaughnessy does not seem to trust such teleological orderliness. In the first part, the writer glides smoothly from human to non-human nature: landscapes become allegorical motifs : “but her life bore a closer resemblance to a hilltop bog” (17); humans fail in their responsibility to protect the environment: “I lug my guilt up the hill, try to shake it off / but it settles like a hump on my back” (16); the caged birds’ song “though undeserved, still redeems” (18), thus unveiling the soothing powers of nature. The landscapes depicted may initially remind us of W.H. Auden’s “The Watershed”, a poem that lends its voice to nature only to confirm humans’ alienation from it: “Go home, now, stranger” (1966: 23). However, Shaughnessy encourages us to overcome first impressions, “No snow, but a hard, hard frost” (15), and discover the beauty that lies hidden: “angular pucks of ice with rainbows inside” (15). The asceticism of the landscape matches the sober style and versification. “Rebuilding”, the third poem in the collection, ends with a note of hope that hovers over the whole first part, as it refers to nature’s obstinate hold on life: “Somewhere, robins are rebuilding unseen / with unsurpassed, invisible skill” (16).

The second part, “Witness”, contains a substantial number of poems on the Northern Ireland Troubles. This is verse about trauma and taboo which, with the passage of time, gives way to the irrepressible need to raise one’s voice “I’ve run out of reasons not to speak” (27). Geoffrey Hartman (2003: 257) claims that the task of trauma studies is to discover the “psychic wounds” in the accounts of traumatic experiences. Reading Shaughnessy’s “The Harpist” (30-31) in this light, one first notices her overt references to political violence “Six bullets his body took in nineteen eighty-four / as they left the Church that ordinary Sunday, / the day his daughter died in his place. Six bullets”. A more attentive reading, however, spots those psychic wounds in grief-related notions of numbness “my stunned awkwardness at the funeral”, entrapment “Ambushed by the suddenness of memory”, unreliability “I […] feel the familiar scepticism rise” and ghostliness “But now, the likeness in her mother’s picture / brings old grief closer, makes a fiction of the coming year”.

If the four-poem series “Belfast Obituaries”, placed around the centre of the collection, denounces the vicious cruelty of the Northern Ireland conflict, poems like “Exodus”, “Arpilleras” and “His Mother’s Apron” delve into the predicament of marginalised and oppressed groups in other lands. These are poems peopled by Central-American migrants who risk their lives as they cross the border with the United States, Chilean mothers and wives who search for their missing ones, and an Armenian painter who struggles with memories of starvation and confronts his trauma with the help of art.

The tragedy of a survivor’s ordeal is that, after they manage to live through an unbearable experience, they usually find themselves alone. They have no one with whom they can verbalise their experience of suffering and turn it into a chronological narrative, which is an essential step in the recovery from trauma. The third and final part of the collection, “Survivors”, begins with a series of portraits of such lonely people whose voices speak “lines from another play, another time” (49). Like the rest of the book, these are songs of experience that have not given up on hope: “Light the lamp of love with jasmine oil / to arouse my senses from sleep, // soothe away the pain of knowing / and dress me in the lustre of innocence” (55).

As the writer Mary O’Donnell says in her back cover endorsement, “Shaughnessy writes with lyric intensity and uncompromising music”. The readers of Witness Trees will not fail to appreciate the courageous and honest voice that speaks through the collection. In it, there is no room for superfluous adornment but just the best-wrought poetic craft.

This review has been written in the context of the research project, funded by the Spanish Ministry of Science and Innovation (FFI2009-08475/FILO) and by the Galician government (INCITE09-204127PR), for the study of contemporary Irish and Galician women writers.