by Abigail Keating. This text may be archived and redistributed both in electronic form and in hard copy, provided that the author and journal are properly cited and no fee is charged for access. 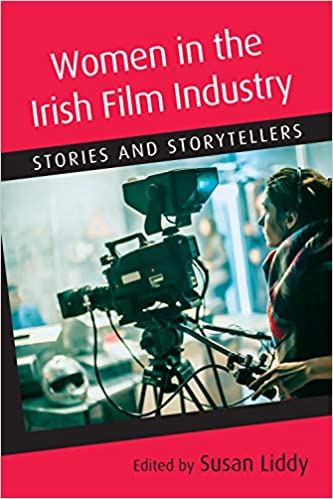 As with any in-depth discussion of gender in contemporary cinema, the contexts that need to be set out at the beginning of a study on women in Irish film are manifold, stretched across society and culture, practice and representation, and questions of the prevailing inequalities within the industry in Ireland and beyond. Editor Susan Liddy establishes the historical circumstances and contemporary conditions from which her collection will unfold through a concise overview of a number of overlapping trends and topics: firstly, of gender parity under an international rubric and Irish cinema’s likeness to other national film industries; of women’s roles in society (and their status within the Irish Constitution); of the discursive significance of the Celtic Tiger period and its aftermath; of the Waking the Feminists movement from late 2015; of, what is often referred to as, the “fourth-wave” feminist context in which the latter played out via social media; and, finally, of the notable shift that has taken place since 2015 –evident through Screen Ireland’s policy that aims to tackle gender disparity (“Six Point Plan on Gender Equality”), advocacy groups such as Women in Film and Television Ireland (WFT) working for gender equality within the Irish film industry, and the support of gender quotas by the Writers Guild and the Screen Directors Guild. Liddy weaves key points on the significance of the global backdrop with the nuances of an Irish milieu. The chapters that are to follow, as she describes, “identify and challenge the inequalities, and the disenfranchisement of women, in the Irish film industry, which replicate, in many ways, women’s position in Irish society and culture […] echo[ing] the ongoing, vigorous international debates” regarding women practitioners (11-2). The lens is wide here – a necessary approach with a collection that is so crucial and so long overdue.

The book is divided into four sections: the past is delved into further under the heading of “Revisiting the Past”; practitioners are given centre-stage in “Practitioners and Production Culture”; activism and education are explored in “Changing the Conversation”; while it is the topic of representation, in its broadest sense, that comprises “Text and Context”, which focuses on fiction, documentary and animation.

Beginning the collection of essays, Díóg O’Connell’s “biographical recovery” of Ellen O’Mara Sullivan (17) takes us on a fascinating journey of unearthing her role in the Film Company of Ireland in the late 1910s. Along with being an interesting historical portrait of a specific time in the subject’s life, this essay “is about giving agency, voice and identity” to O’Mara Sullivan and underlines the challenges of excavating women’s stories within and contribution to early film history.

Women’s voices are amplified throughout Liddy’s collection, balanced with historical, political and sociocultural contextualisation, along with analytical probing. This is tangible in Liddy’s own essay contributions to the study, firstly, through a qualitative exploration of the underrepresentation of women in funding awards and funding applications, based on interviews with fifty-five women writers and writer/directors (53); and secondly, through her interview with award-winning director, Emer Reynolds (The Farthest, 2017) who, among other insightful points, draws comparison between the importance of visibility in the realm of women in film and women in science – “If you can see it, you can be it” (103).

Indeed, visibility is a notable thread across the collection, both in terms of shining a light on the multifaceted contributions of women to Irish film and film culture and on the mechanics and intricacies of the industry that impede women’s progression within it. One such contribution is Laura Canning’s detailing of the career of producer/ director/ editor/ curator, Nicky Gogan, a still-relatively under-the-radar filmmaker, as Canning describes (67), in an essay that aims to respond to the general lack of academic attention paid to film producers. This is a particularly significant quest when one is reminded that fifty-five per cent of completed projects in Ireland between 2010 and 2015 had a woman producer attached (67). Following on from this, Maeve Connolly’s essay delves into another underexamined area of scholarship, the “visibility and invisibility” of the cinematographer (83). Initially noting the complexities of which in a tangible or authorial sense, Connolly explores the strategies that have been employed by women cinematographers to increase their respective and collective prominence within the industry, before presenting two important case studies in Suzie Lavelle (The Other Side of Sleep, 2011) and Kate McCullough (Snap, 2011). Exclusion and inclusion are core themes of Anne O’Brien’s evidence-based study on documentary practice and women’s labour. Semi-structured, anonymised interviews with twenty filmmakers reveal a “push and pull” relationship, as O’Brien calls it (120), between women and the non-fiction sector of contemporary Irish film: how women are seen as important assets in the production of documentaries through the emotional skills and sensitivity that they can bring to a project, yet how the challenges and biases that they face are often acutely gendered.

A focus on Irish film culture across topics of activism, education and collaboration comprises a thematically intersecting feature of this collection. Annie Doona’s chapter on film education looks at the current higher-education framework (in terms of women’s entry into the industry), drawing data from mostly Dublin-based institutions that offer analytical and/or practical courses on film, and at the policy context for film education in the Republic more broadly. Doona’s own data was gathered through a questionnaire sent to policymakers in film and film education, wherein their views were sought on topics of education and gender equality; from which a number of concluding recommendations for a multi-agency approach are derived. Karla Healion, Aileen O’Driscoll, Jennifer O’Meara and Katie Stone examine the activism at the heart of the Dublin Feminist Film Festival, launched in 2014, in the festival’s enduring commitment to showcasing and celebrating the work of women artists. While drawing on feminist ideas from the 1970s, along with the socio-historical nuances of female representation in Ireland, the authors also anchor the festival in fourth-wave feminist practices.

The making of Laura Aguiar’s fascinating project We Were There (2014) is documented in her chapter on collaborative filmmaking in Northern Ireland. Produced in partnership with the Prisons Memory Archive, the film features ten interviews with female relatives of prisoners and staff of the Maze and Long Kesh Prison, along with female prison workers, in a bid to place women at the centre of the predominantly male-dominated narrative of The Troubles. This is a valuable contribution not only to discourses around gender and practice, but also to scholarly questions of the gendering of conflict, and more specifically to the gendering of conflict in an Irish realm. Complementary to this, representations of The Troubles are also the focus of Sarah Edge’s chapter on Pat Murphy’s feature film Maeve (1981) and Anne Crilly’s television documentary Mother Ireland (1988), where Edge presents the texts as feminist interventions that challenged the relations between feminism and nationalism in the 1980s.

Conflict is also a key theme of Eileen Culloty’s essay on filmmaker, Dearbhla Glynn, as Culloty recounts Glynn’s documentary work on the topics of women and violence in the Democratic Republic of Congo, specifically positioning Glynn as a humanitarian filmmaker. Interestingly, Glynn’s experiences as a woman filmmaker are noted with regard to facilitating her with access to authorities (how it is often easier for the “non-threatening” woman) and, similar to what was documented earlier by Anne O’Brien, in relation to the emotional skills of the woman documentarian in the context of a project with an especially sensitive subject matter (187).

The transnational focus continues in Isabelle Le Corff’s essay on the work of Irish writer and director, Juanita Wilson, wherein Wilson’s cinematic interest in human mistreatment and survival (notably, in her 2010 adaptation of Croatian novelist Slavenka Drakulić’s As If I Am Not There) is linked to the broader matter of the Irish postcolonial experience, “as though centuries of distress in Ireland still permeated her imagery” (223). Lance Pettitt’s retrospective analysis of the work of pioneer, Pat Murphy, also draws attention to the simultaneity of the local and the global that exists within women’s filmmaking. Murphy as feminist filmmaker is explored through a twenty-first-century lens in recounting her earlier films alongside her more recent international documentary Tana Bana (2015). Such an exploration of the thematic trajectory of Murphy’s work and the sociopolitical and sociocultural links between her contributions serve to underline just how crucial Murphy’s vision continues to be to Irish cinema and within its discourses.

The sociocultural positioning of women also forms the basis of Ruth Barton’s essay on women, motherhood and domestic space. An analysis of the “male/paternal homeplace”, through its absence and its unforgiving presence (238-239), provides an interesting comparative backdrop in fleshing out the gendering of space and domesticity across Irish cinema. Barton examines contemporary case studies, then, which have rejected old gendered tropes; here, however, the author laments that many of these instances remain on the periphery of Irish cinema, in a nod to an earlier introductory point that Irish cinema’s mainstream continues to be male-dominated (233). Also focusing on relatively mainstream productions within Irish cinema, the final chapter features Ciara Barrett’s analysis of gender equality within Irish animation, including qualitative information on a survey taken by seventy professionals within the industry, where on- and off-screen gender representation is explored. Barrett also turns her attention to a textual analysis of Nora Twomey and Tomm Moore’s The Secret of Kells (2009), Moore’s Song of the Sea (2014) and Twomey’s The Breadwinner (2017), emphasising the effectiveness of the female authorial voice. Following this, Liddy’s final remarks conclude the collection by offering the preceding pages as a foundation for future research, in the hope that this study is the beginning of something greater than the scope of the chapters presented –as Liddy herself highlights, “[f]uture research could include […] intersectionality and broader issues of diversity and inclusion”, among other urgent topics of significance (271).

One of Women in the Irish Film Industry’s most notable strengths is the presence of a shared vision. Not to say that one can reduce the range of topics, methodologies and perspectives explored across the collection to a single vantage point; rather it reflects a coherency of passion – the work is offered with an ellipsis at the end, and each of the authors is committed to the cause of gender parity. To be in dialogue with one another, to share a goal, is a rare feature of an edited collection of this size. I commend Susan Liddy for achieving this, and for providing our discipline, in Ireland and beyond, with such an imperative resource.