by Beatriz Rubio Martínez. This text may be archived and redistributed both in electronic form and in hard copy, provided that the author and journal are properly cited and no fee is charged for access. 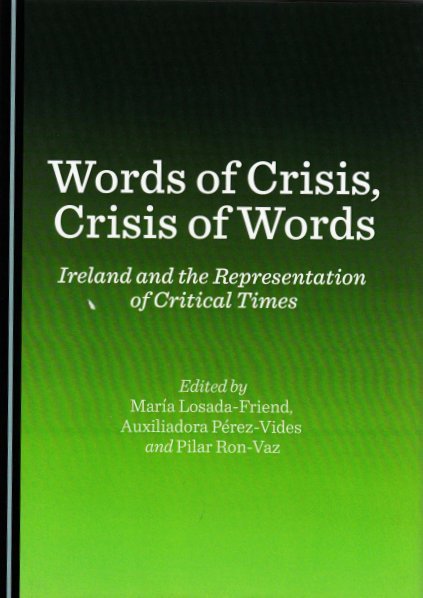 Words of Crisis, Crisis of Words is a comprehensive and exhaustive collection of articles dealing with the different manifestations of crises and adversities that developed throughout Irish History and a wide variety of reactions and expressions linked to them. Ireland, having had to endure long periods of deep suffering and turmoil throughout its history, is now forced to confront a wide range of challenges. Among them, a new political and social plight, and the reconstruction of the perpetually evolving concept of Irishness as part of an ever-changing continent and Ireland’s supposed place in it. This collection of studies covers an abundance of topics, periods and different fields of knowledge, which collectively deals with how Ireland has faced or is facing crises, understanding crises through political, social, economic or personal events. Due to the intrinsic complexity and variety of these topics, the scope of this study, as a whole, might appear to be too broad, but, as the reader progresses through the compilation of articles, a more developed and concise idea of the links between these different pieces of work becomes apparent.

In order to properly cover the varied representations of crisis, the book is divided in eight different parts, each of them clearly focusing on one specific topic. The first part, entitled “Fool Moon”, is a brief narrative piece by writer Peter Cunningham, which works as a literary opening. Through the intertwining of reflexions, oneiric observations and images, Cunningham symbolically relates Ireland and the Middle East. This first and surprisingly resonating comparison holds important significance throughout the book as the issue of Ireland dealing with immigrants and a new more inclusive idea of Irishness is recurrently discussed.

The second part studies the crisis through two different genres: autobiography and cinema. In the first article, Christina Hunt Mahony discusses the “prejudicial attitude toward autobiography” (8), a genre that seems to have always been in crisis. The author studies Irish autobiography in terms of two influences: on the one hand, a more egocentric, personal type of writing, traditionally related to the English writing tradition of autobiographies, and, on the other, a tradition deriving from the Irish vernacular language, more focused on portraying the character within a community and a context (9). It is interesting to see that, through the analysis of autobiographies by authors such as W. B. Yeats, Luis MacNiece, Elizabeth Bowen, William Trevor, Julia O’Faoláin, or Kate O’Brien, among others, Hunt Mahony remarks on how the writers are persistently concerned with their own Irishness, highlighting the significance it acquires to them, with Seamus Heaney being one of the few who seemed to evade the topic. Rosa González Casademont discusses how the current times are portrayed in Irish cinema, paying special attention to The Tiger´s Tail (Boorman 2006) and The Guard (McDonagh 2011). The audience’s preference for films, such as those most recently released that have succeeded in Irish cinema, which exhibit elements of Irish culture and character from a humoristic and satirical perspective, seem to prove that rather than rejecting any film that openly deals with unpleasant realities, Irish audiences prefer a comic vision of the state of the nation, “without resorting to didacticism” (26). Irish people´s attraction for facing life from a satirical perspective will be discussed further on in the book (in the sixth and eighth parts, respectively) as a recurring way of confronting crises.

The third part, which seems to constitute one of the most thematically consistent sections of the book, deals with the Troubles in Northern Ireland from three very different perspectives. On the one hand, the alternative Ulster portrayed by John T. Davis in the film Shellshock Rock (1978) that provided a very unpredictably accurate image of Northern Ireland through the Ulster punk movement, which is thoroughly analysed by Beatriz Kopschitz Bastos. On the other, the meta-national identity present in modern Irish novels which, unlike postcolonial narratives, confronts the previously accepted ideas of nationalism and Irishness, an issue tackled by Shahriyar Mansouri. To close the section, we have the analysis of Deidre Madden’s novels, some of them clearly related to the Troubles in Northern Ireland, according to the author Marisol Morales-Ladrón, while others are more focused on creativity and the role of art and the artist, being Molly Fox’s Birthday (2008) the only novel which brings both issues together.

The fourth part of this volume deals with the crisis in Ireland from a domestic perspective. Asier Altuna-García de Salazar studies Dorothy Nelson’s fiction in which we find the depiction of dysfunctional families, shattered by violence, alcohol and oppression. This vision is a deliberate contrast to the image of the stereotypically traditional Irish family, so central to the construction of “a national, religious and political Irish identity in the 1980s” (92). Silvia Díez Fabre discusses domestic identity from a slightly but significantly different point of view in her analysis of Jennifer Johnston’s Two Moons (1998). The three main characters in the novel seem to portray three very different paradigms of womanhood, representing three different stages in Irish history: from De Valera’s Ireland to the Ireland of 1996, in which sexual identity can be more openly discussed and sexual freedom is a much more common reality. According to the author, the impossibility to express themselves makes the existence of secrecy to protect the unity of the family necessary.

National and personal crises are discussed in the fifth part of this book. Antonio José Couso Liañez studies a letter written by Joseph Sleigh to his children in his deathbed, Good Advice and Counsel given forth by Joseph Sleigh of the City of Dublin, in the Time of Sickness to his Children (1623). This letter represents a striking example of how a private epistle can be transformed into a conduct book, transcending the private sphere, to become a valuable example of its author’s beliefs, thoughts, morals, the double crisis represented by his imminent death and the persecution of the Quakers throughout the seventeenth century (122). The Great Famine that devastated Ireland in the nineteenth century is studied by Purificación García Saéz, in her detailed discussion of the possible Irish origin of Heathcliff in Wuthering Heights (1847); a subject that has not been sufficiently addressed by critics. The author argues that Emily Brontë wanted to represent the social context of the time through the inclusion of Heathcliff as “an obvious personification of hunger” (133). María Gaviña Costero analyses the play Volunteers (1975) by Brian Friel in the last article of this section. According to Gaviña, the imagery of digging is used as a way of portraying the need to look into the past in order to understand the present (142). The prisoners who volunteered to help an excavation in Dublin are related to the Troubles and are considered by their prison mates traitors, as their role was also to help the government. They face a double crisis: they are imprisoned for having being involved in the Troubles and they are going to be punished by those with whom they used to fight.

The sixth part of this collection is devoted to critical humour. Verónica Membrive thoroughly analyses Walter Starkie’s account of the Easter Rising in his autobiography Scholar and Gypsies (1963). Starkie, who did not have a clear position as regards the political struggle, and who was a witness of the chaos during those days, extended his parody to both English and Irish decisions during the Rising (166). For her part, Munira H. Mutran deals with the relationship between a father and his son in Mark Doherty’s Trad (2006), which portrays the tragic side of life from a comic and positive point of view, successfully expressed through their bizarre main characters.

The aesthetic approach to social crisis in modern and contemporary times is addressed in the seventh section of this book through the analysis of Samuel Beckett’s How It Is (2009), Roddy Doyle’s “Recuperation” (2011), Emer Martin’s Baby Zero (2007), and poems by Eavan Boland, Mary O’Malley, Paula Meehan and Michael O’Loughlin. Paul Steward states in his analysis of How it is that pain and the process of being are closely related, “as if being meant to be in pain” (191). Burku Gülüm Tekin studies the inability of Mr Hanahoe’s, the main character in “Recuperation”, to adapt to the changes in his own life and his surroundings that Dublin is undergoing. The character seems to feel trapped in his dull and wearisome life and he even rejects being part of a new multicultural Dublin, full of new incomers. Aída Rosende Pérez carries out a detalied analysis of Baby Zero and deals with the problem of immigration blended with violence, loss, mourning, but, above all, the search for memory and identity and the impossibility of forgetting. The topic of a multicultural, ever changing Ireland is dealt with in the last article of this section. Pilar Villar-Argáiz analyses poems by Eavan Boland, Mary O’Malley, Paula Meehan and Michael O’Loughlin. The author distinguishes two ways of addressing the issue: by comparing Ireland’s current immigration with Ireland’s past as an emigrant country, or by taking a closer perspective to the immigrants, to the point of even sometimes “adopting the voice of the immigrant” (222). For her, Ireland’s diversity can be acknowledged through the way Irish poets construct a more inclusive and complex idea of Irishness.

The eighth and last part of this book concludes with Peter Cunningham, as it started, as an ideal way of coming full circle. In this case, it is an interview conducted by Juan F. Elices Agudo in which several aspects of Cunnigham’s novels, especially Capital Sins (2010) and The Taoiseach (2004), are discussed. Satire, immigration, censorship, Ireland’s financial crisis and its consequences are, amongst others, the topics raised in this conversation. These final personal reflections work as a direct and transparent way of bringing closer some of the most salient topics in the book.

As it has been argued above, in spite of its apparently initial ambitious purpose, this book constitutes a cohesive and consistent piece of work. The variety of topics addressed, the different genres in which Ireland’s changing reality is reflected, and the wide range of perspectives and interpretations that can be found, makes this compilation of high quality research articles, a very valuable source of information for anyone interested in how Ireland and Irish artists confront crisis in different moments of history and how they deal with the transforming, sometimes blurring and complex, concept of Irishness.