Writing the Irish West: Ecologies and Traditions by Eamonn Wall

Writing the Irish West: Ecologies and Traditions by Eamonn Wall

by Mairéad Conneely. This text may be archived and redistributed both in electronic form and in hard copy, provided that the author and journal are properly cited and no fee is charged for access. 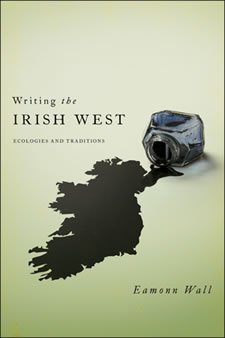 This book is both a fitting and wonderful amalgam of criticism and close reading of the literature of the Irish West, often through the lens of the less encumbered literature of the American West. Eamonn Wall’s love for and understanding of the American West inspires his desire to untangle the much-romanticised Irish West, and both countries and their attendant bibliographies support his journey, while also enriching, and at times problematising his perspectives. It is striking, nonetheless, that Wall’s emigrant eyes fix on a point of his maternal homeland with which he has only become familiar having gained a sense of place in the American West. This study could have fallen victim to its author’s romantic re-embracing of Ireland’s most romanticised landscape; thankfully, and perhaps as a result of distance and time, it stands outside of the rose-tinted arena and reaches a new and exciting note within critical discourse on the Irish West. Many have sought to classify the influence of the imagined and the actual West on artistic ideologies, but Wall’s imperative is to step outside the somewhat jaded forum of definition into the more fruitful terrain of depiction and description. Wall is primarily concerned with the territory of the West, and how this is set out by seven Irish writers and cartographers. The ecology and tradition of place is at the heart of this work and Wall demonstrates that it is a local activity which has international resonances.

The global and the personal or local attributes of the cartographical work of Tim Robinson, the drama of Martin McDonagh, the poetry of Richard Murphy, Mary O’Malley, Seán Lysaght and Moya Cannon and the writing of John McGahern sit comfortably in the territory of the West but appear as refreshing new ideas within the ecological framework set out by Wall. It is not the author’s intention, however, to destabilise the Revivalist dream of an uncontaminated idea of Western purity, but rather to secure these contemporary contributions within the historically and eco-critically sound timeline within which they appeared. Though his subjects are concerned with the past, and are actively engaged in “intense dialogues with Revival writers” (Wall 2011: xvi), Wall also considers them as contemporary documents. This is a very welcome departure, one which points favourably to a new way of looking at and critically assessing a literature, a geography and an ideologically-consumed area of Ireland. Irish language texts could benefit from the same type of treatment.

Much has been written about Martin McDonagh’s western credentials, and those of Tim Robinson have been inscribed from an early stage into the rocks he so loves. The inclusion of Mary O’Malley’s, Moya Cannon’s and Seán Lysaght’s voices in the ecological and literary chronology of the West is timely. Their thematically-diverse treatments of verse speak to the private or local and the communal and/or universal in the natural world around them. Wall, perhaps unwittingly, throws off the shackles of the criteria previously applied to Western authors and develops a new taxonomy. He casts his net more pointedly at writers engaged in portraying their own sense of the West. What Wall articulates most succintly is what that West means to them and what their Wests look and feel like.

The beauty of this book is that it brings together authors who have not been considered collectively as West of Ireland authors, until now.  Yet it has much to offer to both student and teacher, novice and expert. It is a resounding restatement of the value of comparative approaches to literature but Wall carefully avoids comparison for comparison’s sake and instead suggests a shared ecology and a sharing of influences amongst Western writers. His readings on eco-feminism in Irish and American poetry, for instance, highlight why the West is still such a pulsating presence in literature and why there is much still to be captured, poeticised and dramatised within the ecological framework of our most imaginative and real cartographical asset. Walls’ passion is almost tangible and I would have liked to hear his over-arching conclusion on the works outlined and evaluated. His open ending may be the most apt, however. Like the themes he presents, it is suggestive of the possibility and promise of what is to come.