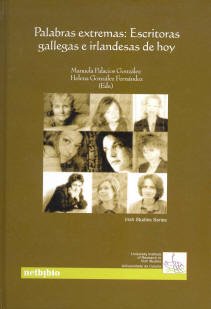 Palabras extremas, the title being taken from a poem by Ana Romaní, is a comparative study of contemporary Galician and Irish women poets, or more precisely, a volume of articles in which the visions presented by both literatures are juxtaposed, set one next to the other, revealing threads of connection and divergences. The book is, in part, the result of a research project, “Poesía y género: Poetas irlandesas y gallegas contemporáneas” funded by the Spanish Ministry of Education (most of the members of the research group are contributors to the volume) and it is published as part of the Irish Studies Series, already its seventh volume, by Netbiblo and the University Institute of Research in Irish Studies, dependent on the University of A Coruña.

In the introduction, written by Manuela Palacios and Helena González, the object of study is placed in its context: from the historical connections of both lands, Ireland and Galicia, to the outstanding participation of women from both literary traditions in the last decades. There is a clear interest on the part of the editors in going beyond blurred definitions of their subject matter and in this sense the book offers a fair account of what has been happening in Galician and Irish writing with regard to women, such as the immersion made by Irish women poets in their physical and emotional experiences, resulting in the corporeal quality of many recent poems, or the cultural activism of Galician women poets, contributing to a redefinition of themselves in a specific social frame: “Son años de democracia bajo un gobierno gallego conservador que quiere momificar lo gallego como folklore y en este contexto la poesía de autoría femenina, que se multiplica en varias tendencias estéticas e ideológicas, representa un camino de normalización, renovación y modernización” (xxiv).

The book’s structure serves the interested reader extremely well: it consists of two parts, the first being devoted to academic essays and the second offering a more flexible approach, with creative essays and interviews. Furthermore, the six chapters of criticism are presented in an attractive form, complementing each other in many ways. In the first one, María Xesús Nogueira writes about landscape in Galician female poetry, while in the second one Manuela Palacios delves into the presence of nature in Irish women poets. Similarly, chapter five, written by María Xesús Lama, is concerned with the rewriting of myths by Galician women poets, while in the following chapter Luz Mar González Arias connects Irish poetry with classic Greek archetypes. In the chapters dealing with Galician writing, Rosalía de Castro, the founding figure of Galician poetry, is frequently mentioned, as well as how contemporary women have handled her legacy.

In her article María Xesús Nogueira explains the metaphors hidden in landscape as presented by Galician poets. Rural views are still markers of identity but women poets draw a picture of life in the country that is far from idealized. The sea, informs Nogueira, is frequently related to intimate experiences by women writers and it is interesting to know that many of them took part in collective publications in response to the infamous sinking of the oil tanker Prestige in November 2002 and its subsequent ecologic disaster on Galician shores.

Manuela Palacios examines the conceptualization of nature by Irish women poets from an ecofeminist perspective. She convincingly persuades the reader that the poetic tradition in Ireland has been blind to the real conditions of women regarding pain, labour, anguish and emigration. Without imposing a homogeneous scheme on her topic, she discusses the contradictory feelings towards nature in the poetry of Eavan Boland, Paula Meehan and Nuala Ní Dhomhnaill.

In the third chapter Helena González studies the peculiar use of language characteristic of what she calls the “escritura violeta” or literature influenced by feminist theories. Poetry in Galicia in recent times, she claims, has become a rich and fertile ground for experimentation. Emblematic poets such as Chus Pato, Xela Arias, María do Cebreiro or Emma Conceiro have acted against conventional rhythm and versification, constructing hybrid artefacts which break the boundaries between genres.

Laura Lojo, in the fourth chapter, successfully explains a varied range of modes of writing in a non-reductive way. Her topic is the female body in contemporary Irish poetry and she offers a wide panoramic view of the different subjectivities that have explored this theme. There has indeed been a reaction against an idealized woman being the poetic muse of the male writer who identified her with a subjected nation; women poets have superseded such views with complex incursions around the body: sexuality, the rewriting of maternity, the relationship between mothers and daughters or biological processes such as menstruation.

In the fifth chapter María Xesús Lama pays attention to the presence of myths in Galician poetry. Luz Pozo, she explains, grounds some of the poems in her book As arpas de Iwerddon (2004) on legends connected toThe Book of the Invasions or Leabhar Gabhála (see above), with poems dedicated to Breogan, Ith or Amirgin, reinforcing her longing for a union with Ireland, “a terra segregada de nós como unha xesta”.

The second part of the volume begins with an essay by poet and academic María do Cebreiro which presents an insider’s view of the Galician world of letters. In her view,   Galician poetry during the 1990s presented the female body in an accommodated way, not being belligerent enough, and María do Cebreiro admits that her opinions on this matter have created controversy with other women poets. Irish artist Anne le Marquand Hartigan explains her reasons for writing in a splendid essay translated into Spanish by Manuela Palacios. She writes about the joys of writing, the artist’s need for support, the activity of literature as an act of love and liberation. In a text interwoven with her own poems she speaks of Ireland as a place where words are important, respected, taken care of.