Reimagining an Irish City: I am Belfast (Mark Cousins, 2016)

Reimagining an Irish City: I am Belfast (Mark Cousins, 2016) 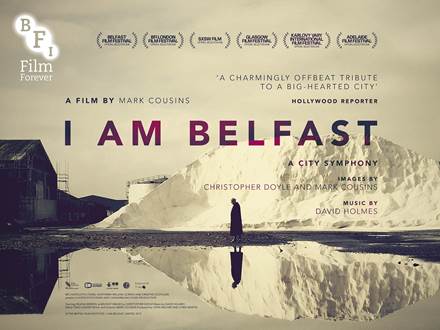 An early shot in Mark Cousin’s I am Belfast lingers on a very unusual and unexpected landscape, what appears to be an icy vista reflected in water, with clouds drifting by in the distance. “Where’s this”, our narrator asks. “Are we at the North Pole? Or in the clouds? Or on an ice planet?” As the shot widens, it reveals a Belfast landmark, Shore Road Mill, hiding behind a hill of salt. From the beginning, Cousins’ film is concerned to provide a different vision of Belfast, to encourage the viewer to look anew at the familiar, or (to the non-local) to familiarise ourselves with the extraordinary richness of place, space and people in this much misrepresented Irish city.

While the city (particularly Dublin) is undoubtedly the principal space featured in contemporary Irish cinema, this is a relatively recent development. For much of the twentieth century, Ireland was defined for audiences both at home and abroad in terms of rural spaces, in depictions informed primarily by an Irish-American imaginary. John Ford’s The Quiet Man (1952) is often mentioned as a key text in this regard though the nostalgic pastoralism evident in that film was apparent from the earliest productions made in Ireland by the New-York based Kalem company in the 1910s. The city, however, rarely featured until the 1980s. Where it did, it tended to be so stylised as to be barely recognisable. John Ford again provides a further relevant example here in his German Expressionist influenced The Informer (1935). While set in Dublin, Ford shrouded the Hollywood set in an almost impenetrable fog rendering the location featured unrecognisable.

Given the criticism which this predominant focus often provoked in Ireland, it is not surprising that the emergence of a sustained period of indigenous production from the 1970s onwards would coincide with an increased focus on the city-space and the experiences of those who live there. Initial interventions – evident in Joe Comerford’s Down the Corner (1978) and Cathal Black’s Pigs (1985) – cast a critical eye on urban Ireland in their respective studies of marginalised characters, the victims of decades of state neglect. Lenny Abrahamson’s Adam & Paul (2004) continued this focus though leavened by an O’Caseyesque eye for the tragi-comic circumstances of the main protagonists featured.

Cousins is undoubtedly aware of the prevading tradition of pastoral depictions of Ireland, recalled in the impressive opening shots of I am Belfast that foreground the distinctive rural landscape that surrounds Belfast city, as a plane approaches a local airport. The film is thereby introduced both as a movement from the rural to the urban and a return by Cousins to the city of his birth and childhood, and it is the urban space that predominates from here on.

In terms of stylistic approach, Cousin’s innovative work comes closest to the essay film form, rather than documentary. Laura Rascaroli’s description of the essay film is particularly relevant to the distinctive aesthetic evident in I am Belfast:

The essay film produces complex thought that at times is not grounded in reality but can be contradictory, irrational, and fantastic. This new type of film … no longer binds the filmmaker to the rules and parameters of the traditional documentary practice, such as chronological sequencing or the depiction of external phenomena. Rather, it gives free reign to the imagination, with all its artistic potentiality. (Rascaroli 2008: 27)

This imaginative freedom is evident in Cousin’s innovative updating of one of the most familiar tropes in representations of Ireland: the personification of places and indeed the entire island as a woman. Dating from the earliest Gaelic descriptions of the island, and indeed evident in the origins of the Irish form of the island’s name, Éire (from Ériu, mythological daughter of Ernmas of the Tuatha Dé Danann, the eponymous matron goddess of Ireland), this trope has been reworked over centuries through the Gaelic Aisling genre and in the work of W.B. Yeats (Cathleen Ni Houlihan) and Patrick Pearse (“Mise Éire”). For Cousins, this figure is reimagined as a 10,000 year old (approximately the date of the first human settlements in Ireland) woman (Helena Bereen) who claims to be Belfast city itself and takes the filmmaker on a journey through time and space, recounting its historical development while travelling through its distinctive streets and landscape. In the process, Cousins offers one of the most innovative studies of an Irish city; his film is partly a paean to its people, language and culture, partly an impressive rendering of the distinctive colours and shapes one finds while walking the streets of Belfast, and partly a hopeful song to a future without bigotry and division.

As song, the film is as alert to the aural as the visual and indeed our guide’s recollections begin by encouraging the viewer to listen to the voices of the city, voices from both the past and present who offer their recollections and anecdotes while rendering the distinctive Belfast accent and humour (“Our definition of love when we were children was, it was jam running down your back and you couldn’t get round to to lick it”). These voices anticipate the images and extraordinary characters to come.

Cousins is fortunate to have collaborators such as acclaimed cinematographer Christopher Doyle and composer David Holmes who visually and aurally complement Cousins’ own refreshing and engaging dialogue with the elderly woman as he travels across the city and into its past. Few previous films have managed to render the distinctive architecture and colours of Belfast as effectively; a “colour study … a plan for a painting of Belfast, of me, a self-portrait” our guides remarks. There is also a patience to the film’s pacing that allows the viewer to fully appreciate the film’s aesthetic achievement.

While Dublin may predominate in representations of urban Ireland in film, Belfast has also featured prominently, though the city is still unfortunately primarily associated in film and television with recurring generic depictions of the Troubles and its aftermath; even where directors have taken more comedic approaches following the Good Friday Agreement – Divorcing Jack (1998), An Everlasting Piece (2000), The Most Fertile Man in Ireland (2000) – the shadow of the Troubles still looms large within the diegesis. Cousins, despite his own stated reluctance, does not shy away from confronting the legacy of Belfast’s traumatic and violent past. Indeed, he engages directly with some of the most disturbing events, including the horrific bombing of McGurk’s Bar in 1971 in which 15 civilians were killed and a further 17 seriously injured. However, his primary focus throughout I am Belfast is the contemporary city and its inhabitants.

Above all, Cousins is keen to foreground the visual and aural richness of Belfast city, finding moments of beauty and resonance (particularly with film) in the most ordinary (a woman crossing the street with her child throws a shadow that reminds him of Hitchcock’s Marnie; “Shall we make a musical about the New Lodge?”). In Cousins’ rendering of the seemingly ordinary and banal, his film is reminiscent of the work of a director he greatly admired, Abbas Kiarostami. His description of Kiarostami’s “wholly distinctive approach to cinema” seems equally relevant to the exploration undertaken within I am Belfast: “the examination of the relationship between the unpredictable flow of real life on one hand and the artworks that try to construct a shape out of it on the other” (Cousins 2013: 441). For Cousins so much of Belfast is a stage, or a frame, and he fills the film with doorways, windows, arches to illustrate. He even manages to find a peculiar beauty in the play of light and colour on the “peace walls” that continue to divide communities across the city – more now even than during the height of the Troubles.

While I am Belfast includes archival footage to incorporate events during the Troubles into its narrative, the film’s principal focus is on Belfast today and the hope that may lie in the future. Cousins films the mock-up of McGurk’s bar created under a Belfast underpass in 2011 and ponders the possibility of a different encounter between “salt and sweet” (a reference to the meaning of the name of one of Belfast’s rivers), Protestant and Catholic, beyond the traumatic legacies of the past. He personifies this evocatively in an imagined funeral of the “last bigot in Belfast”, and an upbeat funeral procession is featured towards the film’s close. It is here perhaps that the key message and achievement of I am Belfast lies, in its creative imagining of a time when “salt and sweet” can move beyond the painful legacies of the past and take pride in the spaces and people who populate the city they inhabit.