by Danny Morrison. This text may be archived and redistributed both in electronic form and in hard copy, provided that the author and journal are properly cited and no fee is charged for access. 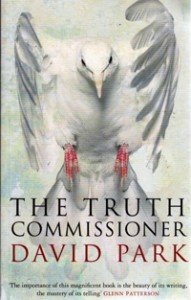 The Truth Commissioner by David Park

Last January the Consultative Group on the Past (a British-appointed body) published its report into how to deal with the legacy of the 3,000 people who died in our conflict. It proposed the creation of a five-year legacy commission to conduct a final, comprehensive review and that, when its remit ends, the door would finally be closed on the past.

David Park’s new novel is thus timely although it examines the possible major repercussions an actual South African-type Truth Commission could have on a power-sharing administration which includes former leading members of the IRA, something similar to the one created by the 1998 Belfast Agreement.

I was very impressed by two of Park’s previous novels  —  Stone Kingdoms(1996), a brilliant and original work set in Africa and The Big Snow (2001): the former a paean to the innocent dead of Sabra and Chatila, Africa and Ireland; the latter set in the mean Belfast of 1963 involving a murder inquiry and dealing with the issues of love, loss, obsession, morals, propriety and madness.

David Park is from a Belfast Protestant working-class background and lives and teaches in a small town outside the city. He has been the quiet man of northern Irish writers, was rarely interviewed or seen on the literary circuit. But he is now receiving wide recognition as a major writer, particularly on the back of his new novel.

During the conflict the IRA killed many suspected informers of whom there were about a dozen the organisation abducted and secretly buried. After the 1994 ceasefire it admitted to these killings and is cooperating with the authorities in locating their remains.

In Michael Ondaatje’s Anil’s Ghost (2000) a forensic anthropologist returns to Sri Lanka as a UN investigator to disinter the bodies of anonymous victims (in this case, of suspected government killings) and attempts to bring about justice for the nameless dead.

The subject of Park’s novel is the case of ‘disappeared’ teenager Connor Walshe, Number 107, before Commissioner Henry Stanfield, a middle-agedroué and widower, the son of an Irish Catholic mother and English Protestant father, who allegedly has “no personal or political baggage”  —  but this is patently untrue. He describes the ANC, with whom he had to deal, as “smugly condescending” and comically/cynically refers to Ireland as “a godforsaken land … where a ship that sank and an alcoholic footballer are considered holy icons”. He views the community’s obsession with its past as “an old manged, flea-infested dog returning to inspect its own sick”.

We met Stanfield’s self-righteous personality before in the character of Michael Dillon in Brian Moore’s lauded, yet execrable, Lies of Silence(1990).

Stanfield’s jaundiced view of public opinion is hypocritical, given his own increasing immunity to the suffering that has taken place, but it is also misrepresentative. For in the narrative the vast majority of the community (apart from the relatives of the victims) are growing tired of the Commission’s daily work and the nightly broadcasting of its proceedings. One who shares this distaste is former IRA leader Francis Gilroy, Minister with responsibility for Children and Culture, who realises that signing up to the Commission “was always a bloody stupid idea”.

Whereas Stanfield can quote Macbeth, was university-educated and has literary aspirations, Gilroy, the son of a sign-painter, is gauche, gave up on Joyce after the third page, tries to read and understand Heaney and resents the superior airs and graces of his senior civil servant advisors (who, in turn, resent this arriviste). At his daughter’s ‘shotgun’ wedding, even after long practice, he ineffectually quotes and mishandles a Philip Larkin poem. Even his IRA comrades who provide his security can’t take him seriously as a minister.

One of those Stanfield summons to his commission is retired RUC officer, James Fenton. Fenton had recruited 15-year-old Connor Walshe as an informer, he and his colleagues threatening the youth that if he didn’t collaborate they would tell the IRA anyway that he was working for them. Though pensioned off with a generous settlement Fenton is angry that the RUC was disbanded and replaced by the Police Service for Northern Ireland, because “it was considered part of the corporate embarrassment, part of a past that had to be quietly replaced”.

For its part in the sham Truth process the IRA goes to America and blackmails ‘Danny’, a former member (who is in the country illegally), to return to Belfast, appear before Stanfield’s Kangaroo Commission and give a version of what happened at the time of young Walshe’s death, which tidies matters up in a way that suits and protects the new political status quo. In turn, MI5 is blackmailing Stanfield with pictures of him with a prostitute in order to get him to produce the same result. The reluctant Fenton is also ordered to appear and is bribed with the possibility of government finance for a Romanian orphanage project he helps organise and which is a lifeline to his sanity.

As usual Park writes with a visual eye: “the bacon hisses and spits like a cornered cat” when layered into the pan; the grey sky was “strewn with wind-blown clouds streaming like shredded shards of last year’s flags” (particularly apposite); the partner of a pregnant woman reacting to a scan “stares at the swirl of what looks like a satellite weather map and listens to her excitement as he points out the hazy continent of their child slowly emerging from the clouds”.

But there is a bit too much symmetry, resonances and stereotyping in the plotting. The main protagonists, all sullied, are in middle age all having their doubts about their past lives and current places. Fenton reflects on ‘dirty police work’ that can gradually coarsen and degrade one. Gilroy is growing weary, wonders if perhaps “Ireland does not exist”, while his wife, like Lady Macbeth, reminds him of the sacrifices they had to make and the rewards they deserve. One IRA man’s view of the conflict is exactly mirrored by Fenton’s RUC view: “We were in a war, things change in a war. Things happen that shouldn’t happen.”

There are side-swipes at priests, mention of possible child sexual abuse, IRA men who look like gangsters out of London’s East End, and an awful made-for-Hollywood denouement as ‘Danny’ (angry that he has once again been ‘used’ by the IRA) breaks free with a girl in tow. ‘Danny’ is 35, James is married 35 years but has no children, Francis is married 35 years and his daughter is pregnant, and Henry is alienated from his daughter who is also pregnant!

And yet, despite these flaws, Park does leave the reader feeling overwhelmingly sad, as the Commission and Connor Walshe’s family listen to the tape-recorded voice of a terrified, 15-year-old petty criminal, whose information was so low-grade as to be pretty useless to the police, the victim of a conflict, asking his captors: “Can I go home now? Can I go home now?”.

[The Truth Commissioner has been awarded the Ewart-Biggs Memorial Award, which recognises works that promote peace and reconciliation in Ireland]