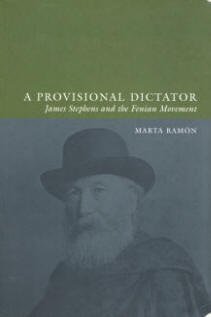 A Provisional Dictator. James Stephens and the Fenian Movement.

A Provisional Dictator is a chronicle of the history of Ireland after Daniel O’Connell’s Catholic Association, a period that covers roughly the first and second decades of the second half of the 19th century. The book is also a political biography insofar as the author focuses on the person of James Stephens, head of the Irish Republican Brotherhood, a secret society created in March 1858 destined to prepare the ground for a rebellion against England with the help of the Irish exiles in America. Finally, Marta Ramón’s study is a revision and in many cases a correction of previous approaches to Stephens’s figure. According to the author, Stephens’s political thinking and his personal traits have only been described partially or without taking into account a comprehensive scholarly research. Ramón aims to provide an all-inclusive assessment of Stephens’s revolutionary career, and consequently begins her account with Stephens’s participation in the Young Ireland’s 1848 insurrection.

The Young Irelanders were a new generation of nationalist leaders who seceded from O’Connell’s Repeal Association for want of a more direct form of action against the colonial power. Starting from that point, Ramón dives into the murky waters of Irish Nationalist politics of those years, giving in profuse detail the motives behind every secession, division and confrontation inside a movement torn by internal strife. Almost every new initiative was followed by the withdrawal of some members from the association with their former colleagues because they demanded more energetic measures against British laws. The history of the Irish expatriates at the other side of the Atlantic, the Fenian Brotherhood, had a similar record of division.

Ramón’s range of vision is wide enough to consider the evolution of international conflicts (the French insurrection of 1848, The Crimean War, the American Civil War, etc.) as well as internal events (the Potato Famine) and their impact on the Irish revolutionaries, as they were always waiting for England’s weakness in order to start their own armed confrontation. But at all times this extensive point of view is accompanied by a precise rendering of personal documents such as letters, diaries, newspaper articles or police reports. This enables the author to tread firmly on uncertain ground, as when she deals with Stephens’s early years. “We now have reason to believe” the author states “that James Stephens was born out of wedlock late in July 1825” (25). The illegitimacy of his birth would help to understand some personal attributes of the future revolutionary leader, like his egotism, his intellectual ambition or his megalomania, as he felt the need to assert himself against a desolate origin.

In the narrative, for that is what any historical account finally is, even in a thoughtful and well-documented book as this one, it is compelling for the reader to witness Stephens’s escape to France after the failure of the Ballingarry skirmish in 1848, his impressions of Paris, his learning and progress in contact with foreign revolutionaries, and his return to Ireland in 1855. Stephens’s arrest by the police on 11 November 1865 and his ensuing escape from Richmond Prison two weeks later conveys a substantial dose of emotion. I believe this combination of dramatic vigour and authoritative consultation of original documents is something to be praised.

Ramón is, in general, sympathetic to the main character although she keeps a wary eye on Stephens’s decisions and is able to express doubt about his high ideals: “For over a year after his arrival in France he could not (would not?) find employment…” (50). Likewise the author’s denunciation of unacceptable deeds is normally tempered by the necessary distance. When explaining Stephens’s bullying tactics against his competitors when the rebels’ newspaper The Irish People was launched in 1863, Ramón admits that “It is easy to perceive an uncomfortable flavour of proto-Fascism in Stephens’s attitude” (144). And then she adds on the same page: “Still – leaving assassination aside – it is difficult to imagine a different set of tactics that could be employed by an illegal revolutionary organization in attempting to overthrow a government and neutralise opposition from its adversaries” (144). Ramón thus manages to keep herself on the thin line that divides the expression of judgements on the past and the professional, objective account of the historian.

The book is a great achievement as regards the strenuous work involved in the research of such facts as Stephens’s visits to America and the complex map of circumstances that determined the nature of the Fenian movement in the United States, which is told with a faultless command. The final two chapters, devoted to Stephens’s fall from power and to the vain rising of March 1867, when he no longer influenced the destinies of the Irish Republican Brotherhood, are completed with an appropriate account of the dethroned leader’s final years.