Eavan Boland’s Evolution as an Irish Woman Poet. An Outsider Within an Outsider’s Culture

Eavan Boland’s Evolution as an Irish Woman Poet. An Outsider Within an Outsider’s Culture 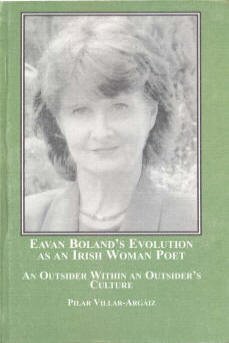 Eavan Boland’s Evolution as an Irish Woman Poet. An Outsider Within an Outsider’s Culture.

Admirers of Eavan Boland’s poetry will be grateful to Pilar Villar-Argáiz because this lecturer from the University of Granada has written a valuable examination of the work of one of Ireland’s finest women poets. Pilar Villar-Argáiz’s study is interesting because she considers Boland’s poetry under a dual feminist and postcolonial framework. She therefore starts from the assumption of Irish literature as a postcolonial cultural production, but complements her analysis with a feminist approach.

Women in Ireland, it is stated in the book, have been doubly colonized, both by imperialism from abroad and by a restrictive nationalism at home. Accordingly, the theories of Frantz Fanon and Albert Memmi, who have written on the stages of oppression, protest and liberation of the postcolonial writer, on the one hand, and the three phases of women’s writing (feminine, feminist and female) articulated by Elaine Showalter, on the other, are employed to assess the different periods of Boland’s evolution as a woman poet.

After the introductory remarks, Pilar Villar-Argáiz addresses the issue of how Eavan Boland began her literary career. In her two first volumes of poetry (Eavan Boland Poetry, 1963, and New Territory, 1967) the writer is presented as an uncertain individual wanting to be accepted by the poetic community. This was her feminine or assimilationist phase, where she concealed the woman in her and remained attached to her (male) literary forefathers. Yeats’s great influence on the fledging poet is dutifully considered here. It is also explained that Boland maintained in her work a detached position from the poetic figures she represented.

Villar-Argáiz analyses different poems of this first period and discovers in them affinities with the struggling woman poet trying to accommodate herself to pre-existing modes. Here we find an exercise in blending theory and practice which will be repeated in subsequent chapters and which is one of the assets of this volume. Villar-Argáiz has not tried to force her subject of study, Boland’s poetry, into the disciplined methodological moulds she has set for the task. At the beginning of the next chapter, in which she discusses Boland’s second “feminist” phase (or the “cultural nationalist” one in terms of Fannon and Memmi), Villar-Argáiz chooses In Her Own Image (1980) as a representative book of this period, and she states that a previous volume of poems, The War Horse (1975) will be used to comment on Boland’s third phase, thus disturbing the logic of a chronological sequence. But here Villar-Argáiz is doing nothing but admitting that literature is not one of the exact sciences: “Although Boland’s evolution as a poet underlies a process of increasing poetic maturity (a process of initial imitation, intermediate protest, and final artistic autonomy), the departure from the inherited poetic tradition is not an easy step to take, and Boland, on her journey towards attaining artistic decolonisation, shows backward and forward movements” (99).

It is very illustrative to turn regularly to the appendix where an interview with the author is recorded (an unusual and gratifying surprise in a book of this kind), where Boland for instance comments upon her beginnings as a writer: “It’s hard to get to those poems in my mind. I haven’t opened any of them in twenty or thirty years. I was a teenager, and an immature one at that. I think real feeling went into them, but no craft” (398).

Contrary to those initial texts, In Her Own Image is defined by Villar-Argáiz as a ground-breaking volume in Boland’s career, as she expressed her womanhood against the canon of traditional Irish poetry. She angrily attacked those aspects of patriarchal society that she considered damaging for her reality as a woman. In this second step of her development Boland advocated her right to be in control of the subjects of the poem. Villar-Argáiz revealingly explores how Boland reclaimed taboo areas of female experience and connects the new perspective that the poet found in her inside journey with Boland’s reading at the time of Adrienne Rich’s work. Poetry and theory are fused again in a densely woven discourse and all aspects of the poems in In Her Own Image are discussed, like the alienating linguistic techniques that Boland took hold of in order to denounce the corruption exerted by male-centered myths (obsessive depiction of special imagery, avoidance of possessive constructions in the first person, etc.). Boland entered with this book in disturbing territories, like alternative visions of child-bearing and maternal love, although she did not escape an essentialist view of women in her new assertion of the self.

The final chapter of the volume discovers Boland in her mature phase, an artist who has reached an autonomous self-expression, free from the dependence of opposing terms and fully independent of the literary mainstream. The poems analysed here cover a wide spectrum, from The War Horse (1975) to The Journey (1986), In a Time of Violence (1994),Outside History (1990), The Lost Land (1998) and Code (2001). Villar-Argáiz describes Boland giving voice to her own experiences as a woman, as a citizen and as a poet, that is, avoiding any attempt at constructing a poetic identity in essentialist terms. We are, in fact, in what Showalter denominates a “deliberate female aesthetic” or Fanon and Memmi a “liberating” writing.

This chapter, which is complexly drawn and where the author has delved more fully into her subject, is divided in four sections: the first one focuses on Boland’s main source of her poetic creativity: her life as a suburban married mother. The second section is dedicated to Boland’s deconstruction of poetic identity. Here her poetry will be analyzed according to Mikhail Bakhtin’s theory of hybridisation, again stepping aside from a constrained theoretical imposition, just as in the previous chapter Villar-Argáiz turned to various feminist critics such as Cixous and Irigaray. The third section considers Boland’s attempt to give voice to those lived experiences that lie unrecorded by nationalist historical accounts. Finally, in the fourth section, which explores Boland’s exile in the United States, the poet is presented psychologically detached from dominant nationalist discourses. As Villar-Argáiz writes, her most recent poems move towards the possibility of conceiving identity in terms of fluidity and boundary crossing.