Ireland and Cinema: Culture and Contexts

Ireland and Cinema: Culture and Contexts

by Lance Pettitt. This text may be archived and redistributed both in electronic form and in hard copy, provided that the author and journal are properly cited and no fee is charged for access. 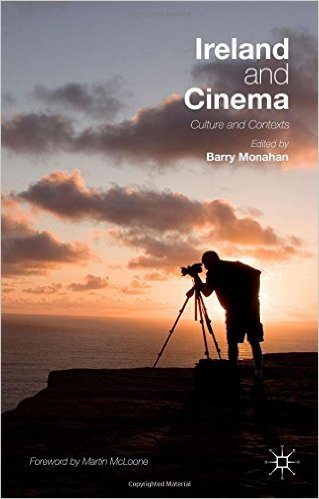 This volume of essays, based on a conference held in University College Cork, makes a strong interventionin the proliferating academic literature on Irish cinema. Its appearance in 2015/16 comes as two key figures in Irish cinema scholarship, Martin McLoone (University of Ulster) and Kevin Rockett (University of Dublin, Trinity College) have taken formal retirement from academic life. And, in a sense, Ireland and Cinema, with its reversed title of the seminal Cinema and Ireland (1987) is an echo-sounding of its concerns – albeit for a new generation, in a transformed environment for cinema and a format of collected essays rather than a co-authored study. The review of the current volume appears in the context of the recognition of Irish achievements in this season’s BAFTAs and Academy Awards in the UK and US. The Oscar honours went to Benjamin Cleary’s Best Short Film award Stutterer (2015) but other talent that has come to the fore includes: for screen writing (Emma Donoghue’s adaptation of Room [2015]), direction (by Lenny Abrahamson, ditto, and John Crowley [Brooklyn 2015]), and Saoirse Ronan’s performance in Brooklyn. These are just one kind of context to consider the relationship between Ireland and cinema. This book suggests a healthier, wider frame of reference through its contributors.

The foreword by Martin McLoone is a career coda by a distinguished scholar, inspiring teacher and generous colleague whose own contribution to screen studies in Ireland is woven modestly into the weft of this book and whose influence is evidenced in its index. But careful to strike a critical note in his prefatory reflections, McLoone rightly insists that his motivation is “more pedagogic than self-obsessed, more political than personal [and that] the present has a history, the now has a past” (2015: i, emphasis in original). What follows is a nuanced and insightful essay on the cultural politics of the previous 40 years of activity in Ireland in terms of film production, yes, but just as importantly all the surrounding stuff like festival organisation, promotion, funding schemes and political regimes, archive work, summer schools and university courses and the whole umbrella of international conditions within which small national cinemas have had to operate since the late-1960s to the present. Indeed, drawing on a series of epsiodes of critical film discussion that has fed into the development of an Irish screen culture in its widest sense, McLoone argues that today “rather than seeing the situation as a national cinema in itself, it is better to see developments in Ireland, north and south, as the successful integration of Ireland into an international screen culture” (2015: xiv) Ireland in this view is not unlike the UK and indeed, other small film production nations in the shadow of the Hollywood behemoth and dwarfed in scale by Bollywood for sheer output. While McLoone writes intimately and supportively about the political aesthetic of films in the Irish new wave period of the 1970s and 80s, he has always been much more open to the possibilities of genre movies and popular forms of TV production than, say Kevin Rockett, who was apt to dismiss much of the indigenous output of film from the second Film Board period (post-1993) for its apolitical and unadventurous formal blandness. McLoone (2008, 2000) has in previous work been assiduous in locating Irish cinema within a number of international contexts, and he also comments favourably on how Ireland has “emerged as a production site for […] cutting-edge narrative television [which] is no mean achievement and one that couldn’t have been envisaged in the 1980s” (2015: xv). He follows this up with what he sees as the second main shift for screen studies to acknowledge, which is the fact of seeing film not in isolation but as part of a wider field of “image-making” production, activity and circulation that encompasses gaming, animation, digital publishing and so on. Turning to the education context for understanding these new forms, of training for production and the place of theory, McLoone is politically critical of the demise of higher education in Ireland and Britain. He argues for sustaining what he calls a “‘critical project” that lies at the heart of all cultural analysis… [that would]…have its own creative dynamic, pushing and suggesting, making connections and offering readings that ultimately adhere to no other agenda than the educational in its broadest sense” (2015: xvii).

Such a “Foreword” concisely frames Monahan’s collection which stands as an attempt to address the impulse and need for such a critical creative project. It follows on well from and bears comparison with Werner Huber and Seán Crosson eds. Contemporary Irish Film (2011). Monahan’s book provides an introduction that sets out a well-reasoned rationale for his structure and the variety of approaches that are given space in the volume, but I did think that his book’s subtitle – “Culture and Contexts” – could have been brought out more explicitly in his introduction. The scope and inclusivity achieved in Ireland and Cinema is admirable and no mean feat: four main parts dealing with “The Politics of Home”, “Gender and Stardom”, “Northern Ireland” and “Overseas Perspectives”. To start with the last, most difficult to ‘package’ and title, it was in fact one of the most enjoyable, featuring contributions that imagined Ireland in and from Germany, France, Italy and Brazil. The essays herein include Fergal Lenehan’s study of Irish-themed musicals across a period from the 1930s to the 1960s, focusing on the case study of Nur de Wind (Only the Wind, Umgelter 1961); Le Corff’s pithy critique of French press coverage of Irish films and the difficulty of empirically analyzing how Irish films circulate in the EU; Borges’ analysis of The Field as adaptation of stage-to-screen and an interview-format piece with Susanna Pellis explaining the phenomenon of an Irish film festival in Rome to Ciara Chambers and Barry Monahan.

This brief summary of one part indicates what a reader of this volume can expect in the rest of the contributions. In Part III on “Northern Ireland” there are essays that are comparative in their theoretical position, notably the “Belfast to Bamko” piece by Stephen Baker and Greg McLaughlin looking at anti-capitalist alternative filmmaking practice in conflict and post-conflict societies and Laura Aguiar’s study of collaborative filmmaking in “transitional Northern Ireland”. The internationalist perspective suggested by McLoone’s work and an ongoing interest in filmmaking practice are two threads through the collection as a whole. Brigitte Bastiat’s essay on adaptation in the film of Mickybo and Me (Loane 2004) is in the “Northern Ireland” section, but it clearly sits well alongside some essays just mentioned that follow it in Part IV. She looks at the matter of re-scripting for international audiences and subtitling. This topic links up well with Nicholas O’Riordan’s novel approach to film via his interest in socio-linguistics of accent change set within a critical history of language, mis-representation and identity debates. This essay by a promising doctoral candidate gelled with others on translation, hybridity and adaptation, but was given a particular linguistic grounding that was refreshing to read. The essays in the book as a whole varied in that some managed well to condense analysis of broader areas or a longer period, whereas others chose to focus in on one film or case study to make their arguments.

In Part III, Merivirta’s essay on the suffering male body in Hunger (McQueen 2008 ) would have sat equally well in Part II but was no less of an achievement in arguing for an expanded contextualization of the films’ analysis of martyr-figures. The film forces us to confront the central role of gendered violence and gendered political oppression which are, in a completely different calibration of genre films, the subject of the four essays in Part II. The ‘politics’ here are sexual politics and gendered representation in popular screen images of female stardom (Barrett), and the interaction between gender and ethnicity in Barrett’s and Dibeltulo’s essay on P.S. I Love You (LaGravenese 2007). Perhaps the most trenchantly argued piece in Part II was Patricia Neville’s critique of His & Hers (Wardrop 2008). Bucking the trend of almost universal admiration for Ken Wardrop’s film, she concluded that “it does little to interrogate or challenge the conventions of Irish femininity in Irish film and society” (2015: 102).

Perhaps the most deeply theoretically engaged of the essays is Conn Holohan’s assured examination of home and space in Irish cinema, coming as it does at the reappearance of the phenomenon of emigration post-2008. He puts the spotlight again on the key concepts “home-space” and “belonging” for a country whose transnational status is deeply imbricated in the cultural memory of Irish people and whose sense of self is based on the default setting of dislocation. In one of the essays that directly addresses class in the book, Jenny Knell’s essay examines representations of gangland Dublin in relation to gender and space in a clutch of films from the late-1990s to 2003, in the rising “boom” years of Ireland’s economic expansion. Knell’s essay focuses on gendered social mobility in relation to space – spatial locations in and around the city; domestic locations and their interior spaces – noting the resilience of entrenched stereotypes of criminalized (working) classes and women within neo-conservative middle-classes (2015: 33).

Overall then, this book exemplifies what Monahan terms the potential value of ‘polyvocality and thematic variety’ in current criticism about Ireland and cinema. It is an excellent, well-produced and high quality companion to consider the field and what is possible for the creative, educative project envisaged by McLoone. The book’s contributors – many of them current doctoral students or early career researchers, globally spread – will perhaps form a third-Irish-wave of critics, commentators and educationalists. We will need them to digest and partake in contemporary debates about the decade that moved from Post-Troubles to the Celtic Tiger to the Crash and on into this officially-declared present moment of cinema and commemoration that sees the premieres of a living history docudrama A Terrible Beauty (Farrell 2016), Kevin McCann’s The Rising (2016) and the Notre-Dame led 1916: The Irish Rebellion (Collins/Magan 2016).