by Germán Asensio Peral. This text may be archived and redistributed both in electronic form and in hard copy, provided that the author and journal are properly cited and no fee is charged for access. 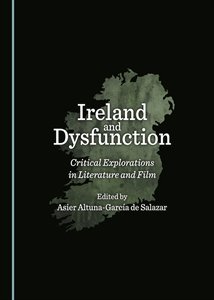 While the term “dysfunction” has been surprisingly alien to literary and film studies until very recently, it is recurrent in fields as disparate as medical sciences and sociology. In sociology, for example, the use of the term derives from the social theory of functionalism, which sees society as an all-inclusive, ever-changing compound striving to achieve stability and harmony through the union of its parts. As proposed by Merton (1968) and Berger (1963), dysfunction thus consists of the inability – or, in some cases, the incapacity – to effect this process of cohesion in society as a whole, but also in more particular threads of the social fabric such as the political system, the family, or individual relationships, which in turn are often perceived as constructs. Dysfunction occurs when a part or parts of this social fabric fail to function as expected by other members of the same group or culture.

Because literature and film are forms which are often preoccupied with the development and intrinsic nature of human society, they lend themselves as an optimal medium for the representation of the process and consequences of dysfunction in a given group. The contributions included in Ireland and Dysfunction: Critical Explorations in Literature and Film, edited by Asier Altuna-García de Salazar and inspired by the proceedings of the XIII International Conference of the Spanish Association of Irish Studies (University of Deusto, Bilbao, 2014), cast additional light on the concept of dysfunction by dovetailing it with issues of the Irish case. In the editor’s Introduction, Altuna states that “[d]ysfunction might be regarded as part and parcel of a portrayal of a landscape of trauma and crisis that may have been traditionally repressed in Ireland at large. But, dysfunction also envisages mediation, managing, transcending and healing” (vii). Mindful of this duality, the chapters included in this volume explore dysfunction in the Irish context over the twentieth and twenty-first centuries. This is done by examining a number of literary and visual genres, including novels, plays, documentaries, TV series and films, but also by closely scrutinizing the lives of major literary figures.

The first section, “Dysfunction and Cinema in Ireland Today”, sees Irish cinema as a representative force of dysfunction in Ireland in relation to the concept of the “other”. On the one hand, Pilar Villar Argáiz’s essay “Cinematic Representations of Immigrants in Irish Ethnographic Films: Alan Grossman and Áine O’Brien’s Documentary Work” explicitly seeks to situate recent immigration into Ireland as central to the understanding of racial and ethnic dysfunctionality set against self-perceived ideas of Irishness. This essay is methodologically sound, being based primarily on contemporary critical race theory as well as on the theory and practice of documentary films. On the other hand, Rosa González-Casademont’s “Intimations of Personal and Social Anomie in Kirsten Sheridan’s Irish-set Feature Films” continues the cinematographic theme by discussing Sheridan’s Irish-set films Disco Pigs (2001) and Dollhouse (2012) in relation to the critical concept of anomie, which she prefers over dysfunction due to the normativity and staticity of the latter. Even though she finds thematic divergences between the two movies, she hints at how the films problematize “the widespread perception of Irishness as a site of stable family life and community bonds” (41).

The second section, “Dysfunction: Sexuality, Dislocation and Space”, sees Irish literature and film as a site for the observation and analysis of dysfunctional processes of sexuality and (dis)location. Firstly, Aintzane Legarreta-Mentxaka’s compelling essay, “Sexuality and Dysfunction in Kate O’Brien”, considers the interrelation of O’Brien’s life and works and how one mirrors the other. Legarreta Mentxaka’s essay is an exploration of how O’Brien’s novels, in their subversive representation of love, family and sexuality, both challenge and are hindered by the heavily policed context of the new Ireland. Secondly, Eibhear Walshe’s illuminating essay “Kate O’Brien and Spain” focuses on the influence of Spain on O’Brien’s life and writings. He argues that “Spain provided an escape, an alternative space to the Ireland of the early twentieth-century for O’Brien and for her protagonists” (71). In his analysis of three of O’Brien’s novels involving Spain (Mary Lavelle, 1936; Farewell Spain, 1937; That Lady, 1946), Walshe traces O’Brien’s relationship with the country, a land she venerated feverishly but of which she also came to be highly critical during and after the Spanish Civil War. Thirdly, Stephanie Schwerter’s contribution, “Representing a Dysfunctional City: Belfast in Texts and Images”, aptly switches the topographical focus to Northern Ireland and Belfast while returning to the cinematographic theme. Her study explores traditional visions of Belfast as home to a socially and ideologically disrupted people through an analysis of Robert McLiam Wilson’s Eureka Street (1996) and the 1999 mini-series adaptation of this directed by Adrian Shergold, the arguments here supported by Bakhtin’s theory of carnivalisation.

The third section of the volume, “Dysfunction: Family, Home and Memory”, opens with José M. Yebra’s essay “Family Dysfunctionality and New Ireland in Colm Tóibín’s Mothers and Sons”, which looks at the dysfunction that exists in Irish families as represented in the collection of stories Mothers and Sons (2006), as well as in his 2012 novella The Testament of Mary. He does so by drawing on Cathy Caruth’s trauma theory and examines the processes of ideological oppression of counter-hegemonic family structures and modes of sexuality. Sara Martín-Ruiz’s “Family and Dysfunction in Edna O’Brien’s A Pagan Place” seeks to understand O’Brien’s 1970 novel as being a “forerunner of a trend in Irish literature which would take hold decades later” (127). With the support of psychological and medical sciences, she provides a wide-ranging analytical study of the dysfunctional family in the novel on an individual and collective level. She cleverly manages to frame the family’s gradual disintegration amidst the profoundly patriarchal and overwhelming Catholic background of de Valera’s Ireland which is symbolised by the 1937 Constitution. Inés Praga-Terente’s invigorating essay “The (Dys)function of Memory: Glimpses of Childhood in John McGahern’s Memoir and Edna O’Brien’s Country Girl” reads these two works (published in 2005 and 2012, respectively) as representative examples of life writing. Both McGahern and O’Brien grew up in the intellectually and morally asphyxiating mid-twentieth century context of Ireland, and depict memory and nostalgia as lacunae of trauma and dysfunction. Burcu Gülüm Tekin’s “The Silent Mother of the Dysfunctional Family: a Feminist Approach to Roddy Doyle’s Paddy Clarke Ha Ha Ha (1993)” then closes the third section. Critically informed by the trauma and feminist theories of Cathy Caruth and Adrienne Rich, she examines the transition from harmony to violence and dysfunction in Paddy’s family. Most importantly, however, she argues that silence on the part of the mother reverberates in Paddy’s narrative in the form of narrative gaps which blur his explicitness in the representation of domestic violence.

The fourth section, “Dysfunction: Struggles and Quests” illustrates dysfunction as arising from, or resulting in, quests and struggles on a textual and biographical level. María Gaviña-Costero opens the section with the essay “In the Beginning Was Silence: Brian Friel’s Revisitiation of the Artist”. She revisits Friel’s 1997 Give Me Your Answer, Do! and challenges contemporary negative appreciations of the work, which for her is “one of Friel’s more introspective and less socially concerned plays” (185). Through textual analysis, Gaviña-Costero sees the play’s powerful autobiographical undertones as mirroring Friel’s own life-long preoccupation with his own art. Secondly, María José Carrera’s essay “‘Back or on, I don’t know’: Samuel Beckett’s From an Abandoned Work” compellingly interprets Beckett’s 1958 short-fiction-turned-play from an autographic perspective rather than following previous psychoanalytic trends. Carrera examines the overtly experimental narrative disruption present in From an Abandoned Work as a textual echo of Beckett’s own writing career. Olga Fernández-Vicente’s “James Joyce and Pío Baroja’s Dysfunctional Relationships with their Countries: A Quest for Independence” brings the fourth section to a close. This essay is a comparative study of two key authors in Irish and Spanish literature of the beginning of the twentieth century. While she notes many similarities in the writing careers and personal lives of the two authors, she also draws attention to some clear differences. In particular, she points out Joyce’s success in his quest for independence as opposed to Baroja, who “got trapped in the nets he had tried to fly by and saw himself linked to the far right” (238), which eventually resulted in his artistic decline and subsequent exclusion from the literary pantheon.

The book concludes with an interview with Billy O’Callaghan, conducted by Marisol Morales-Ladrón. O’Callaghan, author of three short story collections, a work of non-fiction and, more recently, a novel, talks at length about his diligent and steadfast writing process, his influences and inspirations (both literary and otherwise) and his career as a whole. In line with the general topic of the volume, he discusses the recurrence in his stories of the tropes of death, grief and loss in the shape of illnesses and relationship break-ups. He also explains how his characters attempt to painstakingly overcome these dysfunctional events in their lives.

The importance of a work such as Ireland and Dysfunction: Critical Explorations in Literature and Film is justified not only by the palpable academic quality of its contributions but also by its state-of-the-art interdisciplinary approach. Not only does it offer ample and balanced variety in the intricate study of literary and cinematographic art, but it also draws on and is sustained by honest contributions from other scientific realms. All in all, this is a well-considered volume which offers a kaleidoscopic and panoramic view of dysfunction as represented in the works of art analysed therein, and which also revitalises academic production on Irish literature and film from a Spanish-based perspective.