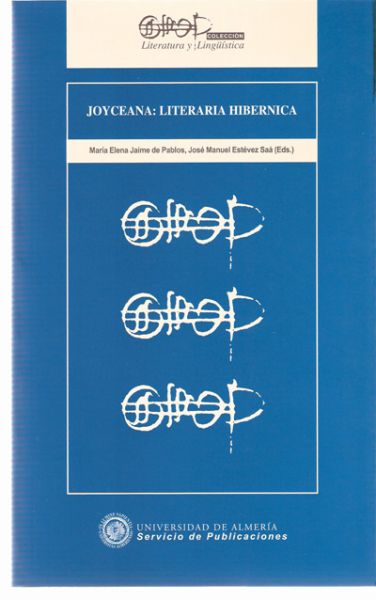 Though a relatively new field of research in Spain, Joycean studies are gaining ground in academic departments, and this book is one example of what is being done in this area among Spanish scholars. The editors of the volume, Maria Elena Jaime de Pablos, from the University of Almería, and José Manuel Estévez Saá, from the University of Seville, have gathered a collection of articles on the figure of James Joyce by some specialists working in Spanish universities. In the first section of the book, seven contributors deal with different aspects of the work of the great Irish writer. The second section is more varied, covering several aspects related to Irish literature in general.

Francisco García Tortosa, one of the leading figures of Joycean studies in Spain, dwells in the first chapter on the topic of James Joyce and Marxist criticism. He firstly explains that Joyce did not ascribe to any political ideology, although he might have been attracted to Socialism in his youth. García Tortosa shows that Marxist critics generally considered Joyce’s work disrespectfully. In the 1920s and 1930s, when Marxists regarded furthering the revolution as the main raison d’être for literature, they saw Joyce’s novels as riddled with frivolities and populated by non-revolutionary characters. The situation did not change substantially after the Second World War, when Joyce’s work was either ignored or received coldly by critics. García Tortosa provides precise information on the position of well-known theorists such as Raymond Williams or Terry Eagleton, both of whom devoted scant attention to the Irish writer.

In the second chapter Rafael I. García León looks into Joyce’s complex and tormented relationship with alcohol. This is followed by an article by Francisco Martínez Torres and Ian MacCandless on the operatic fragments mentioned in Ulysses. The authors of this paper place each piece in the context of the novel, revealing that the music and the lyrics are perfectly integrated in the development of the action at the point where they appear.

In the fourth chapter of the book Margarita Estévez Saá studies the figure of the mother in Joyce’s work. In her opinion, the mother was characterised by her absence in Victorian literature as, according to the ideology of the time, it was necessary for her to disappear so that the main (male) character could develop. In the first decades of the twentieth century, Margarita Estévez Saá explains, the figure of the mother was vindicated, mainly by female writers, but Joyce also did justice to the multidimensionality of women in his work, presenting rich and complex female characters in his novels. Margarita Estévez Saá makes a revision of Joyce’s main works, exploring the peculiar characteristics of mothers, from Stephen’s mother in A Portrait… to Anna Livia Plurabelle in Finnegans Wake.

In chapter six Francisco Javier Quintana Álvarez and Rafael I. García León write about bullfighting in Ulysses. Taking as a starting point two references to bullfighting in La Línea in Joyce’s novel, the authors investigate the actual facts on which the Irish writer could have based his comments.

Benigno del Río Molina is the author of the following article, and he compares chapter sixteen of Ulysses and a fragment of Las Meninas, the famous painting by Diego Velázquez. The author of the paper argues that, just as Velázquez carelessly painted a particular scene on purpose, Joyce similarly wrote the Eumeo chapter “badly”. In both cases their aim was to enhance the rest of the work by comparison and thus highlight the perfect, accomplished quality of their creation.

In the final chapter of this section Juan Ignacio Oliva traces the influence of Joyce in the novels of two writers from very different origins, Amit Chaudhuri, born in India, and Shyam Selvadurai, born in Sri-Lanka. For Juan Ignacio Oliva, their novels construct a postcolonial künstlerroman or portraits of would-be artists, and they share structural and thematic elements that are clearly Joycean.

In the second part of the book, nine articles explore different aspects of Irish literature. The ample range of topics may suggest that, apart from Joyce, other kinds of writing from Ireland also provoke a positive response among scholars in Spain: Adolfo Luis Soto Vázquez studies the images of Ireland in Maria Edgeworth’s Castle Rackrent. Anne MacCarthy comments on the national characteristics of the works of Lady Morgan and William Carleton. Nazareth García Seijas writes on the topic of masculinity in the work of W. B. Yeats. Ingrid Mosquera Gende compares the translations to Spanish and Galician of Yeats’s Cathleen Ni Houlihan. María José López Córdoba approaches the articles of Brian O’ Nolan (Flann O’Brien) in The Irish Times. José Luis Vázquez Marruecos and Inmaculada del Árbol Fernández deal with the classical world in contemporary Irish poetry. Susana Domínguez Pena studies the meeting of past and present in Brian Friel’s Philadelphia, Here I Come! David M. Clark considers the concept of paralysis in Eoin McNamee’s novel The Blue Tango (2000) and the volume closes with an article by José Manuel Estévez Saá, who makes a close analysis of Joseph O’Connor’s novel Star of the Sea (2002).