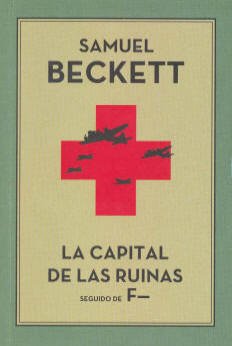 In the past six years Carlos Rod has made a commendable effort to disclose a series of  Beckett’s forgotten texts from his small but gallant publishing house La Uña Rota. Counting on the invaluable help of translator and Beckett enthusiast Miguel Martínez-Lage, he has so far commissioned the translations of minor but relevant works of the Beckett canon which had not been translated into Spanish or which needed new polished-up versions, and has published them in bilingual editions. These texts have been normally accompanied by Martínez-Lage’s explanatory notes which have greatly enhanced the understanding of the Nobel Prize winner’s lost and almost forgotten pieces.

In 2002 Carlos Rod published Martínez-Lage’s translation of Samuel Beckett’s translation of Robert Pinget’s radiophonic play The Old Tune (La vieja canción). It was followed by Martínez-Lage’s accomplished version of Stirrings Still (A vueltas quietas) in 2004, and in the same year he issued in one volume Beckett’s abandoned play on Samuel Johnson Human Wishes (Deseos del hombre) and the seminal text usually known as the German Letter of 1937 (Carta alemana), where Martínez-Lage coined the celebrated expression of “literatura del despalabro” (“Literatur des Unworts” in the original transcript) meant to refer to that kind of writing which is aware of its own impossibility, that is, pure Beckett.

In La capital de las ruinas; seguido de F- Rod presents a translation into Spanish of different texts whose main characteristic is the fact of having been written before Samuel Beckett’s intensive creative period (1947-1951) which would produce Godot, the trilogy and Texts for Nothing. The article “The Capital of Ruins”, the poem “Antipepsis” and the short narrative piece “F-” had not been published before in Spanish, while the poems “Saint-Lô” and “Mort de A.D.” are presented in new versions. “The Capital of Ruins” is a text written for the radio but never broadcast in which Beckett describes the function of the Irish Hospital in Saint-Lô, a heavily-bombed city in the Northern coast of France where the Irish Red Cross set up a basic but much needed infirmary just after the Second World War. Beckett worked there in the second half of 1945 as a translator, ambulance driver and handyman, as it was the only way to return to France because of the difficulties imposed on immigrants by the French government after the conflict. Among factual descriptions of the devastated environment in “La capital de las ruinas”, translated by Martínez-Lage, there are reflections on giving and receiving, on memory, returning and humanity “in ruins”. “Saint-Lô”, by the same translator, is a very short poem on the ghostly city and “Muerte de A.D.”, in Federico Corriente’s  and Cristina Járboles’s version, is a lament for Arthur Darley’s death, a doctor in the Irish hospital who stroke up a friendship with Beckett. Íñigo García Ureta offers in “Indigestión” two competent and spirited versions of Beckett’s poem “Antipepsis”, and finally Martínez-Lage translates a curious piece of fiction, “F-”, published by Suzanne Dumesnil (Beckett’s companion for life) in the avant-garde journal transition in 1949 but commonly attributed to Beckett himself because of its bleak landscape, its oppressive atmosphere and its clumsy but inquisitive characters.