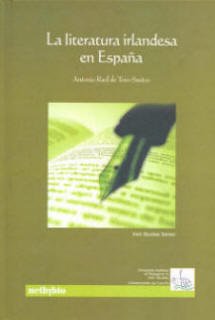 The University Institute of Research in Irish Studies Amergin has added two new titles to its scholarly collection. In the first one, La literatura irlandesa en España, Antonio Raúl de Toro Santos presents the full text of the lecture that he gave at the James Joyce Conference in Las Palmas in 2006 (see Joyce In His Palms below). For that occasion he wrote the chronicle of the reception of Irish literature in Spain until 1965 but warned that in order to obtain a complete vision the periodical press (including literary journals and cultural magazines) had to be taken into account. This section is included now in La literatura irlandesa en España, a comprehensive research that is bound to become a manual of compulsory reference for students and teachers working in the field.

The first conclusion that de Toro Santos arrives at is that there was an almost complete ignorance on Irish writers in Spanish newspapers from 1900 to 1965, with the exceptions of Shaw, Wilde, Yeats, Swift, Goldsmith and Joyce. Sometimes authoritative voices wrote against a rush of translations of a poor quality and others complained that not many Spanish writers had destined their efforts to the act of translating. Only a few writers, de Toro Santos says, did some work of this kind, like Pedro Salinas with Proust, Ricardo Baeza with Wilde, Dámaso Alonso with Joyce and Juan Ramón Jiménez with Synge.

Juan Ramón Jiménez emerges, in fact, as a major champion of foreign literature at the time. His vast knowledge of contemporary European and American writing singled him out within the group of Spanish intellectuals. He even maintained correspondence with Yeats on the publication of his poems into Spanish. But there was low awareness of Irish literature at the time because there was, in general, little knowledge of foreign literature.

All the articles in the periodical press in which an Irish author is mentioned are included in the extensive footnotes of the book. In many cases these were reviews of published translations, like Juan Ramón Jiménez’s version of Riders to the Sea by Synge. Antonio Marichalar also wrote on Liam O’Flaherty concerning the Spanish translation of The Informer. De Toro Santos does not forget to register the references to Irish literature published in the periodical press written in Galician, Basque or Catalan. Yeats’s Cathleen Ní Houlihan was translated into these three languages and it was widely reviewed in the literary journals of the time. A special attention is given to Joyce in Spain, and here de Toro Santos continues the excellent tradition of research on this field which includes such works as La recepción de James Joyce en España a través de la prensa 1920-1975 (1997) by Carlos García Santacecilia; Joyce en España I (1994) and Joyce en España II (1997) by García Tortosa and de Toro Santos, and James Joyce in Spain. A Critical Bibliography (1972-2002) (2003) by Lázaro and de Toro Santos.

A second essay in the book considers the response that Irish writers had in other peninsular languages. De Toro Santos focuses on the privileged relation between Galician and Irish literature, tackling such themes as commercial, religious and military events that connected both communities along history.

Since the mid-19th century, it has been revealed, Galician intellectuals were sympathetic to the Irish for their fight against the English. For the regionalist and nationalist movements that rose in that century in Galicia, the Basque Country and Catalonia, Ireland appeared as a model and took the role of a sister nation. But only in Galicia, de Toro Santos explains, this interest extended to Irish literature, perhaps due to common Celtic roots.

It is necessary to note at this point the fundamental role in the promotion of Irish literature by the journal Nós, which ran from 1920 to 1936. Key intellectuals such as Vicente Risco, Ramón Otero Pedrayo or Plácido Ramón Castro stimulated the study of Irish literature to an extent that was unmatched in the rest of Spain. Otero Pedrayo translated fragments ofUlysses into Galician in 1926 and Risco wrote Dedalus in Compostela (1929), an early fictional account of a Joycean character in an European language. Yeats also found a relevant niche in the journal Nós. The Galician translation of Cathleen Ní Houlihan, by A. Villar Ponte, was published there in 1921. Galician intellectuals found in Irish literature a mirror in which they wanted to see their own image, and frequently looked at Irish shores looking for inspiration and models of their own literature, as Plácido Ramón Castro imagined Galician theatre based on standards set by Ireland. The book is complemented by an appendix with all the literary works by Irish writers published until 1965 that can be found in the National Library in Madrid. 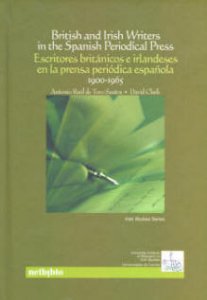 British and Irish Writers in the Spanish Periodical Press 1900-1965 by de Toro Santos and David Clark is an instructed and extensively-documented work of reference which contains a detailed record of every article published in Spain on Irish and British authors during the time in question. One can hardly imagine the various years of work that such a volume has taken the authors. It implied the consultation in different libraries and the task of going through dozens of journals, newspapers and weekly publications page by page. In its dictionary-like format, it offers a complete vision of the reception of English and Irish writers in Spain for more than half a century. It also contains useful appendixes of English literature in Spain, of translation and of historical and cultural references to Ireland in those publications. The present reviewer fervently encourages the authors to continue their work with a future volume that would comprise the period of the last forty years.