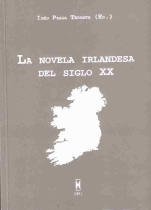 The relationship of Irish novelists with the genre in which they express themselves is nowadays free from anxiety, but this has not always been the case. Since the beginning of the nineteenth century the writer who chose this literary form was subject to a wide range of pressures, including the nationalistic discourse, the readership it was addressed to, the constraints imposed by religion or the strength of the short story, thought to be more congenial to the Irish mood.

However there is such thing as an Irish tradition of the novel which, according to the editor of La novela irlandesa del siglo XX, must be considered by itself and free from the conditioning factors of the English novel or continental models in order to understand its singularity. Such an approach is what Inés Praga proposes in this volume, which is motivated by a lack of specialized publications in Spain.

The title of the first chapter, “En torno a la novela irlandesa. Apuntes para una tradición”, by Inés Praga, may be misleading, as this is not a mere compilation of notes, but a rigorous and fully documented study of the Irish novel in the last two centuries. In a highly readable style and with an engaging argumentation Praga studies the conditions which have made the Irish novel such an elusive term, despite counting with some of the best practitioners of the form in the English language. Praga rightly asserts that in the nineteenth century the novel in Ireland was sceptical of its own viability as a genre. It was difficult to evade the social instability which prevented the formation of a middle class and therefore an autochthonous readership.

Beginning with the “Big House” novel, initiated by Maria Edgeworth’s Castle Rackrent (1800), Praga traces the development of the genre, reaching the dense novelistic production of the 20th century. Authors and novels are set in their historical and cultural context, as when the reader is told that the Irish Literary Renaissance implied the marginalization of the novel, or that the passing of the Censorship of Publications Act (1929) brought about an increase of fantastic literature.

Mª Amor Barros del Río’s chapter “Nombrar lo innombrable. Mujeres y literatura en Irlanda” provides valuable insights into the work of Irish women writers from the first exponents of the form (Frances Chamberlaine, Lady Morgan, etc.) to the young authors of today (Emma Donoghue), revealing in most cases a voice of courage which struggled to be heard in unfavourable circumstances. Every important author, and others who do not normally appear in academic courses, deserves a close analysis in Amor Barros’s account, explaining the significance of relevant works such as Grania (1892) by Emily Lawless, which broke with the traditional ending for women rebels in fiction. Particularly perceptive is her synthesis of The Real Charlotte (1894) by Somerville and Rose, as a novel which portrays a psychological complexity and an incipient feminist consciousness unknown in the 19th century novel.

Leonardo Pérez García examines in “Representaciones de Dublín en la novela irlandesa contemporánea” how Dublin has been depicted in recent Irish fiction. The Irish capital, Leonardo Pérez explains, had lacked an urban identity until the nineteen sixties because of the permanence of rural conservative values. It was from that decade onwards that an urban consciousness began to form in the imagination of writers and city dwellers simultaneously. He begins his exposition with the analysis of two novels set precisely in that time: 44. A Dublin Memoir by Peter Sheridan, and The Mummy, by Brendan O’Carroll. These are novels which present working class families surviving in the city, with religion still playing a fundamental part in their lives. The next group of novels that Leonardo Pérez comments upon, set in the nineteen eighties, reflect an urban society which has lost its former certainties. In the last section he focuses on the work of Roddy Doyle, a Dubliner who has created a fictitious suburb for his native city.

In the fourth chapter, entitled “‘A Treasury of Irish Melodies’. Secretos y mentiras en las novelas de Patrick McCabe”, Ana Esther Rubio Amigo considers the work of Patrick McCabe, one of the most transgressive novelists writing in Ireland today. A spirit of disaffection pervades the novels of this writer, determined as he is to dismantle all the official tenets upon which an oppressive ideology has been built. Ana Esther Rubio firstly examines McCabe’s “Black Trilogy”, consisting of The Butcher Boy (1992), The Dead School (1995) and Breakfast on Pluto (1998). In these novels the author shatters Ireland’s cultural stereotypes instilled by De Valera’s governments, creating in his fictional world the reverse of ideal families: alcoholic fathers, women unable to care for their families and insane children. McCabe’s next novel Emerald Germs of Ireland (2001) subverts once more the “emerald gems” that for the author suffocated the Irish in the past.

In the fifth and final chapter, “La Novela del Norte”, Inés Praga addresses the thorny issue of the novel in Northern Ireland. There are, she says, problems of terminology, of geographical delimitation and of a fundamental lack of specialised studies on the matter. Most scholars do not consider the literature of Northern Ireland in isolation, but maintain a cultural continuity between North and South. An honest approach to the study of the novel of the North, Praga writes, must consider not only the relationships with the Republic, but the connections with Britain as well. Her analysis, moreover, demonstrates the necessity of using a variety of lenses to understand a plural reality such as the one described in the pages under consideration. The main part of the essay is devoted to the reassessment of the novel in Northern Ireland from the 19th century to our time.