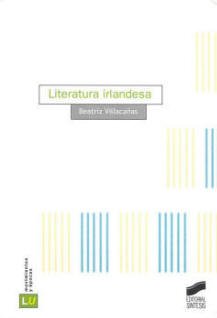 Beatriz Villacañas has written an easily readable and at the same time well-documented manual on Irish literature. Her starting points, stated in the introduction to the book, show that common sense has been the ruling principle of her task. Firstly, Irish literature must be studied independently from English literature (although at any time all kinds of connections between both must be made). Secondly, Irish literature, perhaps more than any literature in the world, must be contextualised: an understanding of the history of rebellion of a great part of the Irish people against a colonizing power must be paramount, but also the differentiated nature of two kinds of population groups, the Anglo-Irish and the Gaelic stock, as well as their religious differences. Finally, the approach to such a heterogeneous material must be at the same time general and specific, rigorous in the detailed account of each individual author but ample enough to take into account the historical circumstances of each period.

Considering that Villacañas’s manual consists of 200 pages (glossary of useful terms, chronology and bibliography not included), it has to be said that the author passes the test with aplomb. Villacañas is likewise careful to explain that hers is a history of Irish literature written in English, although she does not forget the rich and suggestive corpus of epic and myth belonging to the island’s Celtic past.

After a brief but illustrative section on the history of Ireland, in the second chapter the author puts into practice her method of analysis with the discussion of the Anglo-Irish writers of the colonial period: Lawrence Sterne, Jonathan Swift and Thomas Moore. Villacañas manages to offer a balanced account of each of the writers she deals with. Jonathan Swift, for instance, is presented as the first Anglo-Irish author to denounce the injustice of the colonial system, although he basically defended the rights of his own class.

The fact that the author includes excerpts from many of the writers under study together with their translation into Spanish, and fragments of selected criticism, reinforces the divulgative intention of the book. Terence Brown, Hugh Kenner, George Watson, Declan Kiberd, Robert Hughes and Inés Praga are quoted at large and then translated into Spanish. I interpret this as an example of Villacañas’s honesty: an enterprise like writing the history of Irish literature cannot be accomplished without the assistance of fundamental names in Irish criticism.

The chapters proceed in chronological order without an alteration in the method already described: the first half of the nineteenth century and the beginning of the ‘Big House’ novel; the Victorian Gothic of Sheridan Le Fanu and Bram Stoker; the translations from Irish of James Clarence Mangan or the naturalist narratives of George Moore, just to mention a few names.

There is a whole chapter devoted to Wilde and Shaw, and another one on the Irish Literary Renaissance. The section on Wilde avoids hackneyed notions on the dramatist, dealing instead with Wilde’s Irishness and his not always clearly-understood ethics.

Villacañas is equally sharp in her description of the founding of the Abbey Theatre and the contradictions that the movement led by Lady Gregory and W.B. Yeats fell into. For the cultivated Anglo-Irish literati, the urban Catholic middle-classes represented a dullness and vulgarity that they wanted to avoid at all costs, but those drab people had worked and fought all their lives for the independence of their country. As Villacañas remarks, “El Abbey fue el punto de desencuentro entre estas dos Irlandas” (66).

Many other aspects are similarly clarified in each chapter without a recourse to simplification. Synge, for example, forced the language in his plays into a perhaps abusive use of Hiberno-English, but his was at the same time a true representation of the colourful language of the Irish people.

There is an efficient chapter on James Joyce, another one on literature after independence and a further section on contemporary literature. Here the authors are exposed briefly, as befits a period so rich in various literary forms. One would have liked the author ofLiteratura irlandesa to expand more on personal favourites like Bernard Mac Laverty or Medbh McGuckian, and to write a few lines on Aidan Higgins, but it is true that longer explanations or the inclusion of all writers of the last fifty years would have resulted in an altogether different book.

The two final chapters, dealing with the Irish Diaspora and with a selection of poems translated and commented by the author offer an interesting supplement to the volume. These two last chapters, in fact, testify to the divulgative scope of the book despite its relatively few pages. Together with the unfortunately no longer available Diccionario cultural e histórico de Irlanda by Hurtley, Hughes, González Casademont, Praga and Aliaga (Barcelona: Ariel, 1996) Literatura irlandesa would be a volume to strongly recommend to those wishing to introduce themselves into Irish culture.