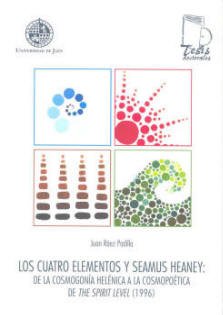 Juan Ráez Padilla is a young scholar from the University of Jaén who has just published his Ph.D. dissertation on Seamus Heaney. His thesis comes in a nicely presented format which contains a CD with the full academic research and a book with a complete summary of his dissertation.

There are aspects in Seamus Heaney’s work which have not been studied in detail, Ráez Padilla claims, particularly the symbology of the four natural elements: earth, water, air and fire. The aim of the present study is the analysis of those symbols in Heaney’s poems, especially those contained in The Spirit Level (1996), where the force of nature plays an essential role. In Heaney’s work there is a balance between the two types of opposing forces represented by the four elements, they engender violence and life at the same time.

Ráez Padilla’s study is an attempt to consider these elements in full in relation to the poet’s writing.  In the first chapter Ráez Padilla goes back to the Pre-Socratic theorisation of the four elements (Thales of Miletus or Empedocles of Acragas). He traces the evolution of this theory along history and how it developed into a literary framework.

In the second chapter he deals with the different interpretations of Heaney’s oeuvre. Curiously enough, Heaney’s poetry has normally been theorised in terms of its earthly quality in his first period (rooted in Northern Irish history and culture), and its airy characteristics in a second stage, in which the poet searches for freedom and cuts himself from former ties. According to Ráez Padilla, the assignation of the “airy phase” for Seamus Heaney’s poetry is inaccurate. Critics have not agreed on the precise point of transition between the two periods. Earth, furthermore, continues to be a leitmotiv in this second period. For the Spanish scholar reading Heaney’s poetry in binary terms is not right and instead he proposes an interpretation in complementary terms, earth and air. The Irish poet’s work would move in the space created by this tension.

In the third chapter Ráez Padilla proceeds on an informative journey through the way the four elements have been interpreted in literary criticism, including recent theories such as gender studies. He also offers a new deliberation based on a global perspective. In the final chapter of his dissertation, he applies this frame of reference to the study of The Spirit Level. Four approaches are employed to study the poems: ambivalence of the symbols, dialectic interrelationships between them, movement and combination. Emphasis is made on those aspects where Heaney’s poetics remain apart from traditional symbology and which represent his search for balance.

In his conclusions Ráez Padilla defines the terms of the discussion and asserts that Pre-Socratic spiritualism pervades over Heaney’s work: opposing principles are reconciled and spirit and body are frequently fused. “It is worth noting that, bearing in mind this hierarchy, the poetry of Seamus Heaney would diverge from the masculinity (air and fire) of the dominant symbolic discourse (reason, spirituality, light, warmth,…) in favour of the inspirational feminity of intuition, corporeality, coldness, darkness” (167).  Contrary to the critical response to The Spirit Level, where an airy vision is preferred, Ráez Padilla considers the downwards movements in this book (the symbolic complex of Janus, he writes, two sides of the same coin) as an opposite force to the “etherealisation” in his poetry.

Politics are not wholly ignored despite such abstract theorisation of the elements. The interaction between air and earth, in fact, reveals Heaney’s indeterminacy and acknowledged confusion on the role of the poet in society. Uncertainty in Heaney, says Ráez Padilla, must not be understood in a negative sense but as a legitimate emotional response. It could not be otherwise, he adds, in a poet subject to such antagonistic pressures (England/Ireland, Catholicism/Protestantism, social ethics/poetic ethics, etc.). Symbols are used in his poetry to represent his own personal complex universe and at the same time they represent a temporary release from oppressive systems of thought.