by Maureen O’Connor. This text may be archived and redistributed both in electronic form and in hard copy, provided that the author and journal are properly cited and no fee is charged for access. 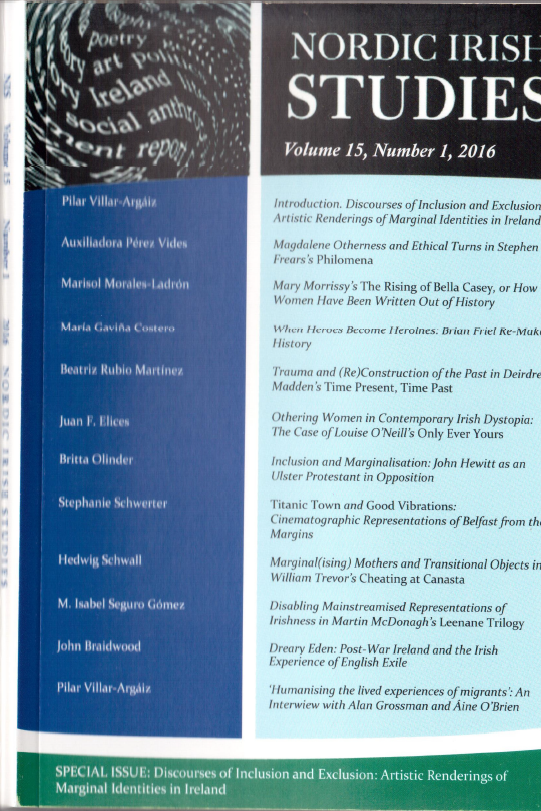 In her introduction to this 2016 special issue of Nordic Irish Studies 15.1, “Discourses of Inclusion and Exclusion: Artistic Renderings of Marginal Identities in Ireland”, guest-editor Pilar Villar-Argáiz states that marginality has been a defining feature of Irish identity from the early articulations of the field known as Irish Studies. Villar-Argáiz also notes the ways in which categories of inclusion, exclusion, and marginality have increased and developed further complexities in twenty-first-century, multicultural Ireland. Post-colonial, post-independence Ireland, many of the essays suggest, has failed to “cherish all of [its] children” or to come to terms with the damage inflicted on many of its own over the course of the twentieth century. This failure ramifies into the present and future, as historical traumas, violence, and injustice go unacknowledged, never mind expiated. These traumas are, instead, replicated, adding new victims to the state’s traditional categories of the abject. It is an interesting time to look again at conceptions of the marginal, a category of analysis that might seem out of date, but the dangers of exclusion are only increasing, as what counts as the “centre” contracts with alarming speed and becomes more impenetrable every day. The rise and dominance of social media in much of the world has created the impression that it is possible for everyone and anyone to find his or her group online, to find a “place” in which to belong. These virtual “clubs” promise respect, acceptance, and personal connection with the like-minded, no matter how far outside of the mainstream, even as material experience in the real world steadily degrades for those excluded from not only power and representation, but also, in some cases, basic rights and access to essential resources. Defining the mainstream becomes more difficult as shared experiences of culture, entertainment, and political debate grow ever more fragmented, limited, and specialised. What is often promoted as a liberatory phenomenon of unbridled creativity and connection actually militates against genuine engagement and communal action, ultimately protecting the interests of the new gilded-age phenomenon of the “one-percent”. Ireland’s late twentieth-century economic boom brought the country in line with other “developed” countries in terms of income inequality, thanks to an enthusiastic embrace of neoliberalism and free-market values. As Ireland emerges from the inevitable post-boom crash, not all boats are rising and many are, in fact, boat-less. The rising tide threatens to swamp an unprecedented number of Irish citizens as the level of homelessness and of families accessing emergency accommodation and “soup kitchens” breaks records. The marginal will always be with us.

The categories of marginality that organise the analyses undertaken in this special issue are gender (which emerges as almost grimly persistent in the majority of contributions across subsections), religion, class, ability, ideology, age, and exile. The first section, “Gender and Marginality”, comprises nearly half of the contributions and opens with Auxiliadora Pérez Vides’s powerful essay, “Magdalene Otherness and Ethical Turns in Stephen Frears’s Philomena”. The research Pérez has been conducting for years on Ireland’s carceral regime of Magdalene laundries and Mother and Baby Homes is brought to bear on a reading of Frears’s successful 2013 film, Philomena. Pérez contextualises the film historically, politically, socially, and culturally, providing examples of artistic responses in fiction, drama, and film to the revelations in the 1990s of not only the abuses perpetrated by these institutions, but also the continuing suffering of their surviving victims. Pérez suggests that the “Magdalene ‘Otherness’” presented in the film is not simply filling a “historical gap”, but is also a “current reality that needs to be solved within the ethical agenda of the nation”. In its sophisticated analysis, the essay deploys Giorgio Agamben’s biopolitical concept of “the state of exception”, Julia Kristeva’s “abject”, and Judith Butler’s critique of the “exclusionary matrix”, which draws on Michel Foucault’s work on technologies of punishment. The Magdalenes, Pérez argues, are a literalisation of Butler’s “zones of social exclusion”. The political urgency and power of cultural representation are persuasively asserted in this call to action that provides an invigorating entry into the special issue. Philomena was based on the experiences of a real woman.

Marisol Morales-Ladrón, in “Mary Morrissy’s The Rising of Bella Casey, or How Women Have Been Written Out of History”, also considers an artistic rendering of a woman’s life. Mary Morrissy’s 2013 novel fictionalises the life of the sister of playwright Seán Casey, Bella, about whom much less is known than is the case for Frears’s still-living subject. Morales-Ladrón helpfully positions Morrissy’s novel vis-à-vis other recent approaches to historiography in contemporary Irish women’s writing, which presents an alternative approach to writing forgotten women back into historical narratives. In this decade of commemoration there is a special urgency to reconsidering narratives of the nation’s founding a century ago, accounts which have accreted into a near-mythological paean to violent and militarist masculinity, an accretion partly achieved by erasing the considerable contributions and sacrifices made by women. As Jacques Derrida argues in Spectres of Marx, our relationship to the dead is one of responsibility. Similarly, Morales-Ladrón asserts that “reconstruction of the past is a repossession of the present”. Remembering is a political and ethical act. It is damaging and hubristic to imagine that we are independent of the past, including the pasts of those who preceded us.

Beatriz Rubio Martinez’s “Trauma and (Re)Construction of the Past in Deirdre Madden’s Time Present, Time Past” also traces the power of reconstructions of the past, especially when that past is traumatic. In Madden’s novel, also published in 2013, however, Rubio finds a text that takes its time coming anything close to an assuasive vision of the value and function of memory. This reading applies a welcome dash of astringent to overly positive representations of the process of coming to terms with the past, which is slow, painful, and necessarily incomplete. Madden’s female characters initially use memory “more as a device for idealisation than a necessary journey into understanding and healing”. The women in the novel find it easier to address collective wrongs than to face individual fears. Community is not a simple evil or good, and Rubio’s analysis of the complex dynamic between the individual characters and their relationships to family and village does much to bring needed attention to a recent novel which, like Morrissy’s, has not received the critical attention it deserves.

It is not possible in the space available to discuss each essay, but the three identified so far represent the strongest entries in the first section, which suffers somewhat from similar themes and approaches being duplicated to uneven effects. It might have been prudent to include fewer, but longer, more fully developed contributions. This could also have the effect of bringing greater clarity to the special issue. So much of the discussion across the contributions comes back to gender and sexuality that further narrowing the overall focus of the issue might have guarded against the danger of the “marginal” becoming a diffuse, and all-encompassing organising principle. For example, Britta Olinder’s fine essay, “Inclusion and Marginalisation: John Hewitt as an Ulster Protestant in Opposition”, which appears in the middle section “Dissidents, Apolitical Subjects and Social Misfits”, has much of interest to say about Hewitt’s own ambiguous self-identification, his shifting and recalcitrant sectarian, political, and cultural allegiances. However, it is problematic, if not borderline offensive, to suggest that a white man born into relative material comfort and privilege is “marginalised” in the same way as are victims of the Magdalene system or people of colour, including migrants. The essay makes clear that Hewitt’s identity as “marginal man” living between two “antagonistic cultures” is a position deliberately and consciously chosen, a position which, while politically provocative and artistically productive, was not something imposed on him that determined his status or limited his opportunities. He was, undeniably, an “outsider”, but one who chose to set himself against the mainstream. The insights of this essay are potentially undermined by its inclusion amongst the others in the issue, a sign of the problem of a rubric at once too confining and too broad. At the very least, a stronger editorial hand could have suggested some finessing of this contribution’s argument, especially in relationship to other essays.

Another noteworthy essay in this second section is Hedwig Schwall’s “Marginal(ising) Mothers and Transitional Objects in William Trevor’s Cheating at Canasta”. Schwall uses object theory and the “good-enough” mother, theories and figures derived from child psychology, particularly the pioneering work of Donald Winnicott, as interpreted by Christopher Bollas, in her reading of Trevor’s 2007 novel. Again, gender emerges as informing the discussion of religion and family and, even, the gentle comedy of Trevor’s text. The inclusion of inanimate objects in the category of the marginalised and the connection between the thing and the child are some of the more striking elements of Schwall’s delightful analysis. While the discursive apparatus is psychoanalytic, the essay indicates the potential for extending this kind of reading into a recent area of ecofeminist literary work, feminist new materialism, which argues for the dissolution of categories beyond gender and race to those that distinguish between what we have come to assume is the “animate” and the “inanimate”, an approach with special significance in Irish women’s textual practice.

The last section, “Marginalities in Exile”, comprises two contributions, including the concluding piece, by guest editor Villar-Argáiz, “‘Humanising the lived experience of migrants’: An Interview with Alan Grossman and Áine O’Brien”. This thoughtful conversation with the documentary makers about migration and multiculturalism in contemporary Ireland neatly circles back to filmic representations of marginality and exclusion in an Irish context, and also returns to questions of gender as well as sexuality. The unflinching yet hopeful intelligence and vision of the filmmakers provides an articulate, forward-looking conclusion to this special issue’s extended contemplation of Ireland’s vexed and continuing struggle to become the inclusive society envisioned by the 1916 Proclamation, which resolved to “cherish all of the children of the nation equally”.