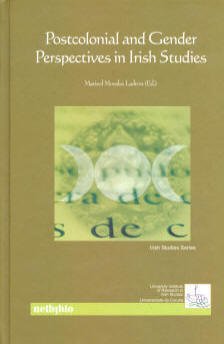 “There is no consensus on the application of the term postcolonial to the Irish case” (xix) writes Marisol Morales Ladrón in the introduction to this book. Certainly no simple answers can be given to the status of Ireland in relation to postcolonialism. Many scholars have alluded to the special characteristics of the Republic, its “atypical case” within the context of the former colonies of the British Empire. Furthermore, a postcolonial adscription to Northern Ireland seems controversial and open to debate. It is a measure of the editor’s skill that she has effectively managed to gather a series of articles by Spanish scholars in which the postcolonial approach is unambiguously advocated. The contributors toPostcolonial and Gender Perspectives in Irish Studies believe that useful results can be obtained by applying to Irish studies the theories and views of outstanding critics of postcolonialism.

The articles in this volume, divided into the general areas of “Postcolonialism, language and gender”, “poetry”, “fiction”, “drama” and “cinema”, also take into account the sharp perspectives that gender studies may project, so that the present book must be understood as an open field where postcolonial studies and feminist studies are seen at work in the common objective of capturing updated considerations on the literature and cinema of modern Ireland.

In the first article Isabel Carrera Suárez offers a complete panorama of the state of the question. She analyzes the consideration that the Irish case has had in postcolonial theory, from The Empire Writes Back (1989) by Ashcroft, Griffiths and Tiffin, to Inventing Ireland(1995), by Declan Kiberd. She reveals that postcolonial studies in Ireland have taken ground since the 1980s and for her it is clear that Irish Studies have widened the spectrum of postcolonial theory. Key texts which have opened the way for a plural vision of Ireland, such as The Field Day Anthology of Irish Writing (1991) edited by Seamus Deane,Anomalous States (1993) by David Lloyd or Inventing Ireland are earnestly described. These books have helped to put Ireland under the lens of postcolonialism. On the negative side of this process, Carrera Suárez writes, the contributions by feminist theorists are still neglected and have not yet been integrated into this current of thought.

In the second article of the collection Asier Altuna focuses on Gaelic and the question of how it can be considered from a postcolonial perspective. Altuna’s first aim is to dive into the past and to examine the evolution of the Irish language and its relationship with power. The necessity of this task is paramount because, in Asier Altuna’s words, today’s politicisation of the Irish language bears a resemblance to cultural and political tensions of previous centuries (19). In his journey through the history of Gaelic the author explains that Irish was an important element in the intention of the first government after independence to gaelicise Ireland, although their initial impetus was somehow tempered with the passing of time.

Historical events like the Great Famine of 1845 or the foundation of the Gaelic League in 1893 are viewed from the perspective of their effect on the native language of Ireland. Although many official attempts were made to preserve and to promote the language, its real use has been limited. In the postcolonial world we live in, hybridity is for Altuna a sign of strength in the context of the Irish language and he supports his views with the opinion of authors like Nuala Ní Dhomhnaill, for whom the translations from Irish are a modern and acceptable approach to this issue. “Translations” concludes Asier Altuna, “should be conceived as a significant component of a global, hybrid and multicultural Ireland” (38).

The following article, written by Manuela Palacios, focuses on the poets of Northern Ireland, who fill with their work the borderland between the two frontiers, the two different national identities and the two religions. Palacios’s article is a thoughtful and stereotype-breaking piece of criticism in that she avoids any Manichean polarities regarding the North and the South: “We observe in the poetry of the North a persistent need to approach the other” (47).

She considers it problematic to analyse Northern poetry as a literary entity that is unquestionably distinct from that of the Republic, and interrogates its elusiveness. Next, she presents an overview of the different generations of Northern Ireland poets and revisits well-known poems such as Seamus Heaney’s “Punishment”, Michael Longley’s “Wounds” and Derek Mahon’s “A Disused Shed in Co. Wexford”, going beyond the mere exposition of the authors’ features of style. Leaving open the debate within the articles of the book, Manuela Palacios shows a different opinion from Asier Altuna regarding translations from Gaelic. For her, it is simply a consequence of the predominance of a few global languages: “The problem I see with this is the paradoxical effect that while Gaelic declines, its related cultural products are only allowed to survive through translation” (60). Far from being a monolithic block, the articles in the book move freely around the connections between literature and postcolonialism, offering different ways to consider the question and to enliven the debate.

Luz Mar González Arias is the author of the next chapter in which love discourse is studied. Far from being an abstract universe, unaffected by the events in the world, González Arias proves that love poetry in contemporary women Irish poets is embedded in the political tug-of-war that has shaped modern Ireland. Incomplete representations of women, constraints imposed upon their sexuality or the exploration of sensory experience are some of the topics dealt with in this examination of the work of Eavan Boland, Katie Donovan, Nuala Ní Dhomhnaill, Paula Meehan, Dorothy Molloy, Anne Hartigan and Leanne O’Sullivan.

Esther Aliaga Rodrigo’s chapter plunges into the depths of the conflict in Northern Ireland through the analysis of the recent work of two novelists of different persuasion, Protestant Glenn Patterson and Catholic Robert McLiam Wilson. They represent a new generation of writers who have struggled to approach the Troubles in a non-sectarian manner, showing an eagerness to find flexible and authentic definitions which may embrace both heterogeneity and modernity.

María Amor Barros del Río also writes about novels, but this time focusing on women writers. In her chapter she studies three periods in which women novelists have tried to search for their own identity outside social and historical impositions. An ample revision is thus made from Emily Lawless’s Grania (1892) to Catherine Dunne’s The Walled Garden(2000).

The seventh chapter is written by Tamara Benito de la Iglesia and she claims that no event has been dealt with so extensively in Irish short stories as the Troubles. She studies selected short stories from the production of four male Irish writers whose response to the colonial rule have ranged from straight denunciation of abuses from the security forces to the presentation of violence as a dehumanizing consequence of the conflict.

Margarita Estévez Saá also takes into consideration the field of the short story. In her contribution she offers revealing insights into the works of contemporary short story women writers who have not normally found a representation in anthologies of Irish writing. Estévez Saá rejects the accusation that women writers do not dare to go beyond realistic and autobiographical modes and offers the example set by collections from the late nineties and the beginning of the new millennium where literary experimentation, lyric intensity and the description of modern, urban lives go hand in hand with other stories of a more traditional content.

The next chapter introduces us to the field of modern Irish theatre. María del Mar González Chacón undertakes the task of reading the work of three female playwrights from Nothern Ireland (Marie Jones, Anne Devlin and Christina Reid) using a postcolonial perspective. The career of each writer is carefully displayed and special attention is given to the Charabanc Theatre Company, created in Belfast in 1983 by five actresses who established themselves as a progressive force devoted to the representation of the experiences of women in their different communities, avoiding in their productions the re-enactment of already-formed images.

Rosana Herrero Martín complements the panoramic view of modern Irish theatre with a chapter on Tom Murphy’s A Crucial Week in the Life of a Grocer’s Assistant (1969) and Sebastian Barry’s Boss Grady’s Boys (1988). In the two plays under analysis there are representations of parental overshadowing and this is taken as a model to explore the prolonged childhood of the Irish State under De Valera’s governments. Sebastian Barry’s play shows an interest in giving voice to the dispossessed, while Tom Murphy’s achievement is to take on stage dreams and fantasy in a period of stifling parochialism.

The final chapter of the book, written by Rosa González Casademont, also constitutes the section devoted to Irish cinema. Hers is an attentive analysis of how Ireland has been represented in cinema. González Casademont offers as well an exhaustively-documented sampling of films which have somehow attempted to capture in images the essence of Ireland. The article is divided into four sections due to an expressed intention of avoiding easy categorisations. González Casademont examines separately the filmic representation of Ireland in the US, in the UK, the characteristics of indigenous cinema, which has developed in the last two decades, and finally a whole section is devoted to the presence of Northern Ireland on screen. Many well-known films (and others which have not transcended the frontiers of the Republic) are commented upon, revealing the signifiers of Irishness that have been favoured by the different productions. Issues of gender, ethics or detailed aspects such as films in Irish are considered in this finely drawn cartography of Ireland on screen.