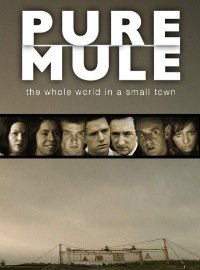 In any year Pure Mule would be a significant achievement. That it received 8 IFTA nominations in 2005 – winning 5 – speaks for itself about its place in the televisual landscape of the past 12 months. RTÉ, through its Independent Production Unit (IPU) – as well as a number of in-house productions – has now made several years of television drama worth talking about, breaking a long and arid period of inactivity. Produced by ‘Accomplice TV’ (producers David Collins and Ed Guiney, who also made ‘Bachelor’s Walk’), Pure Mule is testimony to an impressively courageous strategy of development by the IPU which has been responsible for a number of similarly interesting, if not always as successful, projects over the past 5 years.

Pure Mule’s 6 hours of prime-time television (6 x 52 min episodes) can be located within two textual precedents. The first is a growing confidence in the production of television drama alluded to above which has resulted in mini-series as varied as Any Time Now, Bachelors Walk (3 series), Love is the Drug, Paths of Glory, Fergus’ Wedding and Showbands. The primary target audience for these programmes is the much sought-after 15-34 demographic, central to advertising spend. In reality, they have come from the pens of middle-class programme makers in their 30s and bear the concerns and perspectives of the pre M50 generation.1 With the exception of the ‘retro’ Showbands, these shows in various ways have attempted to depict a (post)modern Ireland, located in the narrative ‘interstice’ between the immediacy (and production values) of soap opera and universalising tendency of cinema. Taken as a whole, we can trace lineaments of concern in these series. These would include a preference for the comic mode (although this is often tainted by a bitter-sweet melancholia or satire); an attempt to locate the fault-lines of a culture in transition; discomfort with changing social values among small communities of characters; and an interest in representing the ‘new spaces’ of Irish life – apartments, landmarks and construction sites – as if they in some way offer expressive possibilities for a changed condition of Irishness.

So successful have these series been in critical and audience terms, one is tempted to suggest that a majority of development energy and production finance should be directed to this sector. The recurring presence of a group of individuals (actors, directors, producers) and production companies suggests that some have made just that decision, with Accomplice and Grand Pictures in particular notable for their cultivation of talent.2 At the very least a new and exciting space for audiovisual expression has been opened up, which can confidently and successfully compete with content from the US and the UK in way that feature films in theatrical release find much more difficult.

Pure Mule, is arguably the most artistically ambitious production to date; a stylish and confident amplification of themes and setting found in a second textual precedent: writer Eugene O Brien’s play Eden. I saw this on its original Abbey tour in 2001 and the clarity of its vision, characterisation and writing left an indelible impression. Don Wycherley, who would soon after come to widespread attention in Bachelor’s Walk, played opposite Catherine Walsh in a two-sided monologue between a married couple on in their 30s. Set – or at least inspired by – O’Brien’s native Edenderry, Co Offaly, the play’s title brought a degree of anonymity and therefore generality to the story’s setting, a painful and at times painfully funny, meditation on married life in a small, claustrophobic and unequivocally post-lapsarian Irish country town. Like his fellow emerging Irish playwriters, Conor McPherson (who directed the Abbey stage production of Eden) and Mark O’Rowe (Howie the Rookie, Made in China), O’Brien adopted the monologue form to give vent to character’s secret lives, exposing an agonizing gulf between public and private identities that bordered on schizophrenic.3 Like O’Rowe and McPherson O’Brien’s world was resolutely male – even when it offered a female voice – focussed around alcohol, frustrated sexual ambition and self-loathing. It made for dark and exhilarating viewing.

Pure Mule revisits similar territory – some characters and situations bear similarities to Eden – giving voice and dimension to a broader group of characters from an unnamed small town. Neither rural nor urban this in-between place is reminiscent of contemporary Ireland at large – part of an amorphous sub-urban sprawl, caught between paradigms of community, values and the social politics of space. The use of locations are expressive of this see-saw identity: with the fulcrum of the pub sitting between domestic interiors of traditional Ireland (one of which houses the painfully poignant figure of a middle-aged mother with Alzheimer’s) and a new housing estate which remains under construction for the entire series. The characters of ‘Pure Mule’ move physically and imaginatively back and forth between these spaces; confused and often blind, they stagger (mostly literally) between past and future, between the confines of tradition and the new promise of consumerist plenty.

While many recent Irish films seem more properly suited to television than the big screen in ambition and technique, Pure Mule opens a space for a hybrid format. Showing the influence of a structuring trend popular in US independent cinema (Magnolia, Night on Earth, Crash, Traffic) and a commitment to writing development found in some of the best American television (The Sopranos) it allows individual characters a separate episode (‘Shamie’, ‘Kevin’, ‘Scobie’. . .) to shape the point of view (offering ‘multiple focalisation’) of six weekends from Friday evening to Monday morning, while maintaining a broader communal canvas. The plurality of perspectives links the series with similar cinematic narratives, allowing each episode to stand alone while being part of a whole, while the generous length of the overall ‘story’ facilitates a developing, complex and often unresolved set of relationships. Furthermore this allows for a welcome balancing of gender perspectives; three male, three female. Of course, this structure conforms to many definitions of post-modern narrative in its polyphony and weakening of a central narrative voice. Visually, the cinematography of Owen McPolin puts the look of the series on a par with many feature films. Among McPolin’s credits are Showbands, Headrush and Flick, all of which featured photography of a rich and atmospheric quality, not quite painterly or formal but far from social realism. There is an expressive quality to his lighting and composition which, in this instance, adds flourishes of formal beauty to landscapes (the much maligned midlands) and settings (the building site in particular) normally unexplored and unacknowledged. The overall effect is one of heightened realism, reflecting the alcohol-addled adventures of the characters’ weekends.

If the series represents a community in transition the grounding preoccupation of Pure Mule lies in Ireland’s Catholic past. Its creators and character are obsessed with sex and heterosexual union. The pub dominates as the locus of interaction but only as a pretext, through the anaesthesia of alcohol, to sexual seduction. One of the series’ central characters, Scobie, is a builder during the week and rough-hewn Casanova on the weekends, one minute excited about the possibility of experiencing a ‘real-life porn movie’, and later seducing his now married babysitter. He is also depicted considering or engaged in masturbation on several occasions. Male fantasy, desperation and immaturity dominate the sexual agenda with the three lead female characters of Pure Mule responding to that agenda to a greater or lesser extent. The sexual politics of the series are its most compelling aspect – indeed there is little else – but they remain stubbornly predictable after a number of episodes. There is an underlying fixation with sexual repression by the writer, with only a cursory interest in any larger dimension of modern Irish life. The decision by Jennifer – the one female character who is single and in no great hurry to get ‘her man’ – to re-emigrate at the end of the series (having returned from Australia at the beginning), might be read not only as an inability to function within the crushingly dull, if recently ‘liberated’, confines of small town sexuality but equally, on a meta-textual level, in the drama that it has given rise to.

If elements of drink-filled ‘Pure Mule’ sound stereotypical and limited it’s because they are. What lifts them above familiarity and gives the series cultural resonance and relevance is the quality of the writing and uniformly excellent performances. There are no actors named in the opening credits, no stars identified as central and few of the more familiar faces of the Irish acting world here. Ireland has an almost baffling abundance of acting talent, and all here breath life and soul into their characters lifting them well beyond the types that they are inspired by and could so easily be reduced to. Eileen Walsh, Dawn Bradfield and Tom Murphy deservedly took awards for acting at this year’s IFTAs but the whole cast deserve credit for the nuance, complexity and depth of their performances. It was this collective presentation of flawed, confused, unremarkable and often unattractive characters that formed a strong bond with Irish audiences, so far from GAP-styled vacuity of Friendsand similar sit-coms. Of course, Pure Mule lapsed into sentimentality and cliché on occasion, and although it ignored many issues and characters that have come to make up contemporary Ireland, it sought to offer viewers an infrequently realised, though widely familiar vista of a culture still mired in the twin preoccupations of sex and drink. In this concern it showed itself to be as much a product of its time as of imagination.

Pure Mule aired over 6 weeks in September/October 2005. As for the title, it is explained in the publicity for the series thus:’Pure Mule’ can be positive or negative – ‘went out, long queue, shite beer, no craic, walked home in the rain on me own, it was ‘Pure Mule’’ or ‘went out, straight in, no kissin’, loadsa drink and scored big time, it was ‘Pure Mule’’. It all depends on the intonation.4)