by Ciara Chambers. This text may be archived and redistributed both in electronic form and in hard copy, provided that the author and journal are properly cited and no fee is charged for access. 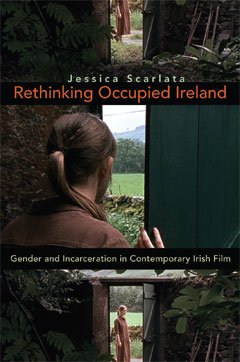 This study focuses on the concepts of gender and incarceration in Irish film in order to interrogate how filmmakers have chosen to critique Irish nationalism and “confront the brutalities of Irish history” (253). It examines ten films ranging from the commercially successful to the aesthetically engaging but less accessible. These films share a common sense of entrapment (some more overtly than others): Maeve (Pat Murphy 1981), Anne Devlin (Pat Murphy 1984), Four Days in July (Mike Leigh 1984), Hush-a-Bye Baby (Margo Harkin 1989), Some Mother’s Son (Terry George 1996), H3 (Les Blair 2001), Silent Grace (Maeve Murphy 2001), Sinners (Aisling Walsh 2002), The Magdalene Sisters (Peter Mullan 2002), Hunger (Steve McQueen 2008). The book also refers to other filmic examples, photography, murals, political pamphlets and art. Consideration of the visual recordings of the Prisons Memory Archive, a collection of interviews on site with former prisoners and staff at Armagh Gaol and The Maze/Long Kesh, which may have enriched the book’s contextual discourse, is however, absent.

The study is competently written, providing thorough and often visceral textual analyses of the chosen films. It engages with writings on Irish cinema by stalwarts like Martin McLoone, John Hill and Luke Gibbons and embraces cultural studies through reference to socio-political theorists Walter Benjamin, Michel Foucault and Stuart Hall, amongst others. In its theoretical framework it leans more towards the historical than the cinematic context and prioritizes the local and socio-political overbroader gender/feminist discourse.Nevertheless, it proficiently navigates through the complex web of twentieth century Irish politics, drawing upon international parallels where useful, making this an accessible text for those with little knowledge of Irish history. The study interrogates visual tropes such as the Blanketman and Mother Ireland from a range of perspectives and captures the problematic nature of such cultural expressions of masculinity and femininity.

Turning her attention to Mike Leigh’s Four Days in July in the introduction, Scarlata recognizes in the film romantic notions of Irish nationalism that gender the nation as female, associating its femininity with suffering, subjugation and confinement. Scarlata sets up this position to scrutinize notions of suffering and martyrdom associated with the colonized Irish male that become problematic within this framework. Equally significant is the book’s interrogation of nationalism’s colonization of women through the forces of church and patriarchy. In the following chapter exploring Maeve and Hush-a-Bye Baby, Scarlata explains how these films reveal “the gendered politics of occupation and the ways that space is claimed, guarded and placed under surveillance by a range of competing forces that often converge on the bodies of women” (35). Occupation, surveillance, and attempts at policing the body are undertaken here by both the British military (in Maeve) and the Catholic Church (in Hush-a-Bye Baby).

Scarlata turns to notions of masculinity next, specifically through exploration of the 1981 Hunger Strikes and “dirt” protests (she eloquently outlines the significant differences between “dirt” and “dirty”).This chapter explores Terry George’s commercially conventional Some Mother’s Son, Les Blair’s H3, characterized elsewhere as adeptly visualizing prisoners’ self-abjection (Blaney in Rockett and Hill (Eds.) 2006: 87), and artist Steve McQueen’s aesthetically provocative filmic debut Hunger. Scarlata notes that both Hill and McLoone, while recognizing George’s film as problematic, commend its tribute to the families of hunger strikers, while she highlights its “insistence on a depoliticized image of motherhood” (158). In fact, there is a suggestion that while George chooses zones of heightened political tension as the settings for his films (Northern Ireland, Rwanda) he is not interested in complex political analysis and therefore spectacle and sentiment win out at the expense of astute cultural commentary or political nuance, as is often the case with historical cinema. Hunger and H3, Scarlata asserts, shift focus from the larger narrative and visual scale to the minute. Focus on small details becomes exquisitely artistic in Hunger, drawing attention to the artifice of representation and reminding the viewer of the impossibility of accurately reconstructing history. H3 offers a new version of Irish republican masculinity, “one that tries to allow for individual psychology as well as communal solidarity, and one that blends the transcendent and the material, the pious and the practical” (138). All three films, Scarlata argues, approach heroic nationalism by presenting death as a means of achieving political gain, although with varying constructions of history and gender in the process. Ultimately Scarlata explores how traditional cinematic representations of militant and aggressive masculinity are necessarily tempered to accommodate the blanket men’s use of pain and suffering as a means of resistance, evoking the sentiments of the War of Independence hunger striker Terence MacSwiney: “It is not those who can inflict the most but those who can suffer the most, who will conquer” (29). This framework informs Scarlata’s examination of the invisibility and silence of women prisoners within her subsequent analyses of Silent Grace, set in Armagh’s women’s prisons in 1980, and Anne Devlin, based on the events of the 1803 rebellion from the perspective of Robert Emmet’s housekeeper.

Scarlata’s consideration of internment extends beyond the policies of the British administration to further explore the Catholic Church’s incarceration of women in Magdalene laundries. The correlations between the treatment of male and female prisoners and the female penitents are clear: beatings, stripping, jeering at vulnerable naked bodies, enforced haircuts etc. Examining this process of “internment…behind convent walls” for unmarried mothers, victims of rape and abuse and women considered to be of dubious moral fibre, Scarlata contextualizes the “detention of women without trial for ‘crimes’ committed against a nationalist ideal of female purity”(203) before exploring its representation in The Magdalene Sisters and Sinners. Here, Catholic Irish nationalism is the colonizing force, vanquishing and occupying the “impure” female body. Both films depict the horrific cruelties inflicted in the institutions and while both protagonists escape the laundries, a sense of entrapment enforced by the patriarchal forces of the Irish nuclear family and the religious control of the Catholic Church persists, leaving the spectator without emotional release. Again, the artifice of cinema is raised by reference to a particular scene in The Magdalene Sisters which depicts abusive priest Fr. Fitzroy filming nuns and penitents in the laundry gardens with his cinecamera. Scarlata asserts that the sequence “discredits a staple of the traditional archive and a weapon in the arsenal of ‘reality’ – non-fiction footage – by revealing that what passes for the real is only as reliable as the person behind the camera” (241). Indeed, Sunniva O’Flynn has commented on further complexities connected to this scene: it was informed by the director’s research into the clerical collections of the Irish Film Archive. The scene is a loosely re-enacted sequence from the Delaney collection of the grounds and inhabitants of a Magdalene laundry in Dublin in the 1930s. O’Flynn raises questions about the blurring here between fact and fiction (2004: 50) and there is certainly room for ethical debate around Mullan’s mining of the archive, which necessarily draws comparisons between the original amateur filmmaker and the grotesque voyeur presented in the narrative film.

One of the highlights of the book is the attention it pays to the extraordinary work of Pat Murphy, in its exploration of Maeve and Anne Devlin from the perspectives of both their cinematic achievement and their radical politics. Murphy’s aim was to examine women’s participation in nationalist history by eschewing romantic notions of female involvement with the “cause” and exploring the less dramatic, sidelined contributions of those who were often frustrated at their marginalization from politics. Murphy does this through avant-garde filmmaking that challenges the spectator in both content and form. Maeve defiantly mobilizes the male gaze in one particular scene with a long take lingering over the main protagonist’s naked body as she discusses life in Belfast as a woman with her sister. As Martin McLoone has noted, the camera “lingers so long over the shot that it challenges the (male) audience to question why the scene is constructed in this way. The viewer is then forced to ask questions about how and why the female form is usually displayed in cinema” (2000: 143). Similarly in Anne Devlin, the protagonist is rarely at the centre of the frame and she critiques her own narrative world and that of the cinematic spectacle, from the sidelines. Devlin’s silence in the film (again a six minute long take is used in a scene depicting her interrogation) also operates as an act of defiance against both colonial patriarchy and filmic excess and artifice. As a filmmaker, Murphy has significantly contributed to debates on gender, nationalism, and representation in film more generally and Scarlata’s analysis of these two films does much to remind students and scholars of Irish cinema of the importance of Murphy’s oeuvre. Indeed, these and the other close textual analyses provided in this study will be useful for teaching purposes and the book will be of interest to students and scholars across the fields of film studies, Irish studies, postcolonialism, gender and history. Both the aesthetics and the structure of Murphy’s work critiques simultaneously nationalist history (and its representation) and cinema itself, a feat the author has also achieved in Rethinking Occupied Ireland.