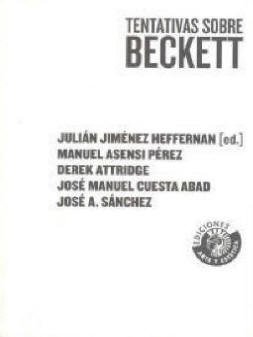 As part of the centenary celebrations commemorating Samuel Beckett’s birth, a cycle of lectures took place at the Círculo de Bellas Artes in Madrid on 2-4 October 2006. The book under review is comprised of the revised talks presented at that event, edited by Julián Jiménez Heffernan, senior lecturer in English at the University of Córdoba. The editor is aware of Beckett’s sacralisation in recent times as an icon of modernity and acknowledges both his sense of betrayal for producing a book on his work (Beckett never fostered any interpretative quest on what he wrote) and the unavoidable failure of such endeavour.

In any case, he adds in the prologue, the articles included in the present volume are just tentative approaches, part of an exploratory process of interpretation that will never be finished, that cannot be finished because the last and extemporaneous modernist will never be fully apprehended. The positive effect of volumes like this one is that readers are encouraged to go back to the texts again, looking for missed nuances and applying new perspectives to their reading. The articles in the book are highly philosophical and tread firmly through the imposing regions of theory.

Manuel Asensi Pérez, in the first contribution to the book, affirms that Beckett’s difficulty stems from the author’s explicit rejection of declarative statements in his work. It is as if Beckett foretold what was going to happen when the questioning gaze of critics started to pay attention to his work. The writing he produced, therefore, had the seeds of its own deconstruction and thus dismantled any attempt towards interpretation.

Asensi Pérez considers one instance of such a scheme: the abundance of the adversative conjunction but in Molloy. As is well known the novel exhibits a high degree of hiper-reflexivity: at the same time we read Molloy’s story and Molloy’s telling of that same story, with the ensuing impossibility of reaching clear conclusions. Molloy subverts the traditional rhetoric figure of correctio because although he goes back over his words and tries at all times to redefine what has just been said, no real correction is provided, confusing the reader (and himself) even more in the process. Rather than adjusting the lens, the narrative is de-focalized and a radical unknowingness is everything that we have finally gained.

In the second chapter Derek Attridge provides a thorough exposition of Beckett’s presence on John Coetzee. The South African writer was one of the many artists who felt fascinated by the Irish master and even wrote a scientifically-inspired Ph.D. dissertation on his work in an attempt to have access to its secrets. Crucial to Coetzee’s engagement with the fiction of Beckett is the latter’s handling of the English language, the way he transforms ordinary and sometimes grim lives into an intense pleasure for the reader. What Coetzee learnt from Beckett, Attridge says, is that style is an aim in itself, not just a road towards meaning. Although the younger writer admired the comedy in Beckett’s work, his novels are tinged with something close to bitter irony. Nevertheless, Coetzee was more successful in adopting for his characters the mechanical, distant, unexciting attitude towards sex that he saw in Beckett’s novels.

José Manuel Cuesta Abad tries to solve a problem in the third chapter of the book. Beckett’s work spins over an obsessive concept: the idea that his writing seems produced by a non-entity, the speaking subject being equivalent to no one saying things that cannot be said. If this is so, what kind of experience is worth the expression represented in the literary work? For Cuesta Abad Beckett’s writing is the place where the possibility of experience is devoured by the experience of the impossible. Beckett’s creatures have something of the unborn, not fully alive nor completely dead either, half beings for ever digesting continuously recited words. Beckettian characters are instances of a verbal flow: they obtain their identity from the verbosity that builds their individualization. The anti-essential humanity in his novels (symbolized by the depiction of miserable, poor, forsaken vagrants) would have as a result the unassailable quality of his writing.

Julián Jiménez Heffernan writes what I consider to be the best chapter of the book. He posits the thesis that if Beckett, as is commonly asserted, dismantled the Western tradition of narrative, he must have known it well in the first place. In any case for Jiménez Heffernan the novel as a literary genre was doomed to obliterate itself from the very beginning, it was destined to meet the end of the God-like author, a state of things that Beckett’s writing perfectly symbolizes and which is widely accepted today.

Jiménez Heffernan claims that Beckett did not destroy anything and advances powerful reasons: he wrote novels (not anti-novels, Jiménez Heffernan stresses); there is plenty of evidence in the form of echoes and allusions to show that his novels are deeply embedded in the long history of novel writing (Jiménez Heffernan speaks of Beckett’s seven novels. I would say there are eight of them as Dream of Fair to Middling Women is not a mere draft but a fully completed work); this same tradition has always shown a great capacity to reshape itself and to give birth to new forms which have renewed the genre. Beckett would belong to this category of alternative writing as old as the novel itself.

This appreciation is not completely new. José Ángel García Landa in Samuel Beckett y la Narración Reflexiva (Zaragoza: Prensas Universitarias, 1992) also placed Beckett’s prose fiction in the tradition of the novel. In his study on Beckett’s trilogy, García Landa claimed that Beckett’s subversion of the novelistic genre implied in fact the conquering of new territories for this fictional form. It must also be said, however, that the concept of anti-novel does not necessary cancel any kinship with a previous tradition. In his A Dictionary of Narratology (Lincoln: University of Nebraska Press, 1987) Gerald Prince defines antinarrative merely as “A (verbal or nonverbal) text adopting the trappings of narrative but systematically calling narrative logic and narrative conventions into question”, and he mentions Molloy as an example of antinarrative.

What is powerfully original is Jiménez Heffernan’s convincing and wide-ranging explanations of the Irish writer’s belonging to a pre-existing lineage. He establishes the Gospel as a primal antecedent for Beckett’s narratives and proves that Fielding’s classic definition of the novel as “a comic Epic-Poem in Prose” is a frame that Beckett’s novels conform to. Jiménez Heffernan proposes that for a better understanding of Beckett’s enigmatic work, and against ethereal interpretations, one has to keep in mind that his writing is deeply anthropomorphic: a human body (or at least part of it) is always represented. A humanistic resolution lies behind Beckett’s anthropocentric interest. His work, though, would be excised of any moralistic imprint.

Beckett, Jiménez Heffernan states, had no inventiveness, there is nothing to find out or discover: he registered what was already given rather than inventing what did not exist. Hence Beckett’s preference for the inventory, by means of which his characters frequently register their ridiculous possessions. A revision of Beckett’s obsessive catalogues of things in his novels complements this excellent paper.

In the last chapter José A. Sánchez writes about scenic image and cinematographic action in Beckett. Tracing an analogy from a picture of the author, Sánchez develops the idea of how Beckett also kept control of his image in his theatre plays: he allowed remnants of his own subjectivity to reach his characters but refrained from giving them total capacity of seduction. His characters are thrown out on stage as bodies to which fragments of discourses are added. Sánchez explores Beckett’s theatrical knowledge beginning with the description of Roger Blin’s mythical staging of Waiting for Godot in 1953. Considerations on the physicality of some Beckettian characters are also provided. In his theatre and in his radio plays Beckett developed a kind of visually-focused writing, in the sense that he took into consideration the spectator’s gaze. Willie in Happy Days is an adequate example of the way the playwright tried to control the audience’s way of looking at the scene. Glances, eyes and ways of looking took an increasing importance in his plays as the weight of meaning in words was reduced, tending towards the creation of scenic objects. In this context, the 1999 project Beckett on Film, in which 19 dramatic works by Beckett were filmed by different directors, is properly assessed.