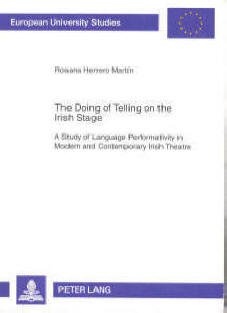 The Doing of Telling on the Irish Stage. A Study of Language Performativity in Modern and Contemporary Irish Theatre.

Many studies on contemporary literature lack a guiding principle to connect all the threads that remain unexplained and unrelated. Rosana Herrero Martín’s book is a different case. From the consideration of language’s performative nature she in fact builds an alternative history of contemporary Irish theatre.

Her thesis is that language has not normally been used in Irish drama for the presentation of actual facts, but has become a protagonist in itself, it has put more emphasis on telling rather than doing and it has raised imagination to the category of primal force in the scene. Her project has been the revision of Irish theatre in the past 125 years stressing this element in the major theatrical movements during this period. With the long sequence of authors and plays described in the book, The Doing of Telling on the Irish Stage is a considerable feat of orchestration.

Herrero’s dissertation is divided into four parts. The first chapter presents the multidisciplinary approach of her study, consisting of a complex theoretical framework where different schools of thought are represented: speech acts theory, orality, poststructuralism, phenomenology, therapeutic approach to story telling, postcolonialism, the revisionist perspective of history and the teachings of Lacan on the unconscious. With such a combination of procedures (some of the approaches are difficult to reconcile) the book may lack a cause-and-effect uniformity, but it gains in colour, interest and freedom. All these movements and theories, nevertheless, are applied at some point in the book without neglecting the main tenet: Most Irish contemporary theatrical repertoire is anti-naturalistic and non-mimetic, in other words, it is theatre of language in performance. In many of the plays studied in the following chapters English as the written word is represented with awe and mistrust. That is why the Irish stage has focused on the oral faculty of language, as a way of searching for roots in the ancient traditions of an ancient language: “As a country whose people have suffered a long history of dispossession in reality, Ireland has fervently sought its sense of identity in the imaginary” (31). The pervasive idea of language on the Irish stage as a structure with an enormous destabilising potential enables Rosana Herrero to make her way through the burning charcoal of theory unscathed.

W. B. Yeats, naturally, occupies the discussion of theatre in the next chapter. As Rosana Herrero reminds the reader, he was the first writer to formulate the role of the Irish dramatist as shaman. His linguistic idealism and his continuous use of symbols, dreams, dance, masks and reveries in his plays make him the founding figure of the non-factual theatre in Ireland. He left a legacy that other Irish dramatists have, to a bigger or lesser extent, followed. Herrero delves into Yeats’s ritualistic procedures in theatre along the whole of his literary career, analysing early plays such as On Baile’s Strand (1904) or mature ones such as Purgatory (1938). Herrero traces Yeats’s evolution as a dramatist from his beginnings as an author who relied on language alone to arouse the imagination (he was a poet after all) to his latter attempts towards the necessary collaboration between speech and physicality. His central role in the foundation of the Abbey Theatre and his unsuccessful attempt to connect with the audience of his time is fully analysed and contextualised.

Herrero next studies five plays of the “early Irish theatre movement” that roughly coincide with Yeats’s career in theatre writing: Dion Boucicault’s The Shaughraun (1875), Oscar Wilde’s The Importance of Being Earnest (1895), Lady Gregory’s Spreading the News(1904), J. M. Synge’s The Playboy of the Western World (1907) and Sean O’Casey’s The Shadow of a Gunman (1923). Again, the use of language as the carrier of a renewed meaning of reality is the common factor that links such diverse plays from Boucicault’s alteration of the stereotype of “the stage Irishman” to Wilde’s heterodox linguistic dexterity, without leaving aside the rich linguistic texture of The Playboy of the Western World.

Samuel Beckett projects his troubled shadow in the third chapter and here Rosana Herrero shows a profound knowledge of his intellectual background. She rightly describes that the source behind Beckett’s endless experimentation on stage lies on a solid intellectual basis, namely, his conception of language as a fraudulent vehicle of expression. She traces the author’s evolution through apprenticeship with Joyce, his contact with the musical and visual arts, his readings of Fritz Mauthner and his abandonment of English in order to search for his own voice. The main dramatic texts of the Irish author are carefully dissected, reaching precise conclusions: “Language, in particular, storytelling, is resorted to by Beckett’s characters as a therapeutic method to exorcise loneliness, existential boredom, and above all, to provide their lives with an illusion of coherent sequence” (132-3). Herrero’s chapter on Beckett is formidably polished and it goes in the opposite direction from stereotypical accounts of his work.

Finally, in the fourth chapter, the plays of seven contemporary dramatists (Brian Friel, Tom Murphy, Frank McGuinnes, Sebastian Barry, Marina Carr, Donal O’Kelly and Enda Walsh) are discussed to prove that the central notion of language’s performativity is kept alive in subversive and radical forms by the new generation of Irish playwrights.