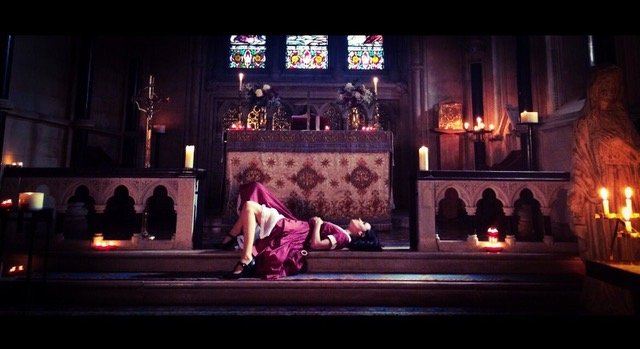 Emilie Pine, writing in 2011 about the development of a “remembrance culture” in Ireland at the turn of the twenty-first century in response both to official, state-driven investment in commemoration and memorialisation, and to the increasing anxiety around the revelation of historical institutional abuse, comments that:

We are not who we thought we were, or put another way, we remember ourselves differently now. The consequence of this revisiting the past is that it creates new narratives – alternate and more complex narratives – taking account of memories that were for too long ‘forgotten’, or sidelined, by Irish history and culture. These new narratives expand the traditionally narrow definition of Irish historical identity, and reconfigure this identity through the framework of remembrance and trauma. (3)

The reconfiguration of identity through the uncovering of traumatic historical memory is at the centre of Viko Nikci’s remarkable 2018 film Cellar Door. The story focuses on Aidie (Karen Hassan), a young woman who appears to be stuck in a temporal loop, shifting back in forth in time as she tries to unlock a secret buried in her unconscious. The first scene shows her submerged in a bathtub, with no recollection of how or why she is there. The strap-line of the film, “what’s the last thing you remember?”, becomes a recurring refrain: in a macabre take on Groundhog Day, Aidie is returned over and over to the same scenes, reliving the loop to find some kind of clue to make sense of her story, and to allow her to progress to the next level of memory.

It quickly becomes clear that the story is about a lost child, taken from her at birth while she is imprisoned in an unnamed institutional setting. We see her pregnant in a church, with a sinister nun, Bly (Catherine Walker), and Kassel, a priest (Mark O’Halloran), offering assistance, shelter, and care. We see her in a circle of other women, under the watchful gaze of the same nun, each steadfastly refusing to speak to her. We see her locked in a small bedroom, drawing the faces of children in her notebook and on the walls. We eventually see her give birth in a dark and windowless room, with the nun and priest dispassionately looking on; we see her screaming as she wakes, with no baby, clutching her flattened stomach. The spectre of Ireland’s architecture of containment (a phrase taken from James M. Smith’s book on the Magdalen system), the large scale incarceration of young women in church-run (and state-endorsed) institutions such as the Magdalen laundries and mother-and-baby homes throughout the twentieth century, haunts the film: indeed, director and screen writer Viko Nikci cites this history in interviews about the film specifically referencing Tuam, where historian Catherine Corless uncovered evidence of the mass burial of the bodies up to 796 infants and children in unmarked underground containers beneath the Bon Seceurs Mother and Baby Home in Tuam, Co. Galway, between 1925 and 1961. The ghost of Tuam is overtly invoked in the script, in a scene where Aidie confronts her mother about her father’s awareness of what happened to her baby – “you could fill a septic tank with what he knows”, she says bitterly; later, we see her scrabbling in the earth in the garden of the institution, looking for a handle to an underground cavern where she believes her son is located, having been told by another inmate to “follow the pipes”. (The maps of the home at Tuam mark the underground container in which the human remains were found as septic tanks, though this is disputed by the order).

Cellar Door does not merely conjure this history as a narrative framework: Ireland’s architecture of containment also operates as a formal and an aesthetic frame of reference for the film. The mise-en-scene is eerily familiar: the tiled hallways, claustrophobic stairways, and looming religious statues recall both the photographs of real-life institutions published in media accounts and official reports, as well as the documentary and feature film reconstructions of these spaces. There are visual echoes of Peter Mullan’s The Magdalen Sisters and Aisling Walsh’s Sinners (both from 2002) in particular, in the disorientating architecture of the convent and the camera’s focus on railings, fences, and barred windows. The women trapped with Aidie wear shapeless pinafores resonant of the aprons worn by the women that toiled in the laundries. And yet, while there is a concerted effort to “date” the story within Ireland’s “new narrative” of historical trauma, there is also a palpable resistance to fixing the story as something that happened in the past, something which Aidie (and thus Ireland) needs to work through, and thus move on from. The film is imbued with a timeless, dream-like, almost fairy-tale aesthetic, as well as the nightmare of historical reality: Aidie’s pre-incarceration costume, for example, evokes the 1950s with its tailored pinstriped dress and Mary Jane shoes, but also brings to mind “Alice in Wonderland” – an effect heightened by the disorientating jump cuts that shift Aidie from one temporal space to another, as if falling down a (rabbit) hole. Catherine Walker’s costume also seems to deliberately lack specificity, and feels almost theatrical or cinematic at times – she wears a variety of different habits, ranging from the loose, less structured, headscarf often worn by modern sisters, to the boxy wimple of the Sisters of the Good Shephard (an order particularly associated with the Magdalen system, and the habit used in both Mullan’s and Walsh’s films), to the more conspicuous starched cornette of the traditional habit of the Daughters of Charity (channelling a more performative aesthetic, à la The Flying Nun). Aidie’s lover and the father of her baby is similarly performative, seemingly ripped from the annals of Hollywood ‘Oirishness’, replete with rustic braces and a flat cap. The group sessions with the other women in the institution have a distinctly modern therapeutic air, an air that also underpins Aidie’s individual sessions with Kassel, which are psychoanalytic in their playful, cat-and-mouse verbal jousting. The story then is given a more contemporary and universal feel, making it more difficult for the viewer to achieve a comfortable historical distance from cultural trauma.

It’s on the level of form, however, that the film most innovatively engages with the Magdalen history from which its nightmares spring. Pine’s discussion of memory and trauma insists strongly on the need not just to remember these hidden and silenced stories from the past, but to develop an “ethical remembrance culture”:

It is important to excavate the past, but … the past should not be preserved eternally within formal and static structures because this too represents a form of repressing memory. These formal structures must be opened up to air and light, to usher in a full acknowledgement of the past, in order for the trauma to be released, and for the future to be able to ‘forget’. What is paramount in the present is to be able to create a positive, and ethical, living remembrance culture. (170)

Central to this more ethical form of remembrance is the notion of bearing witness and the importance of testimony. The driving force of the movements seeking to draw attention to the abuses which underpinned state and religious ideology in Ireland in the twentieth century has overwhelmingly been rooted in the stories of the survivors, and spoken through the voices of the women and children that suffered the abuse, as part of a refusal of the politics of silence that surrounded this system. The destabilised formal structure of Cellar Door mimics this investment in witnessing: Aidie’s fragmented memories, dropping in and out of time, experiences repeated but with differing resonances and perspectives, reflects the fragmented nature of the testimonies gathered and collated in official inquiries into institutional abuse such as the Ryan Report (2009) and the McAleese Report (2013), and in oral history and research projects such as Justice for Magdalenes Research. The contingent and unreliable record-keeping by the religious orders and the state, which conspired to obscure and indeed obliterate the real lives and experiences of their victims, is also a tangible and powerful feature of the film, in Aidie’s discovery of and subsequent destruction of thousands of hidden files in a secret room (echoing the real-life “accidental” destruction of records in many of these institutions); and, in the drawings she feels compelled to etch on the walls of her cell and in her notebook – hundreds of infants and young children, each with a black “X” scratched over their faces.

Ruth Barton discusses the ways in which mainstream narratives of abuse, including the aforementioned films by Mullan and Walsh, are often invested in a more redemptive closure, allowing a “cathartic release” for the audience, which she notes is inconsistent with the testimonies of survivors themselves, both in how they left the institutions, and the lasting effects of their experiences to the present day (121). The conclusion of Cellar Door is ambivalent in this regard. There is catharsis available for the audience, in that the mystery of what happened to Aidie’s son is resolved. The final stitching together of the narrative threads might seem too pat for some viewers, and perhaps takes the wind out of the film’s trauma sails somewhat. Again, there’s a question of form here, in the way Cellar Door situates itself somewhere between thriller, mystery, and horror, echoing films such as Memento (Nolan 2000), and M. Night Shyamalan-style “twist films”, in the way the pieces of the story fall into place in the closing sequences. How this formal catharsis intersects with issues of ethical depiction of trauma is complex, as Kathleen Vejvoda points out in a discussion on the representation of child abuse in contemporary Irish horror cinema, arguing that the juxtaposition of trauma and genre “implies that we do not need to care about or even believe such narratives as history” (49), and that in this form, trauma risks becoming just another scary story. Nevertheless, Vejvoda continues, “there is also a need to imagine ways of coping with that recurring nightmare, particularly at this juncture of Irish history” (49). The uncanniness at the heart of Cellar Door’s formal, aesthetic and narrative structures can be seen, perhaps, as engaging with the (re)emergence of a Gothic mode in literature and film in the post-Celtic Tiger period, presenting Ireland as a cultural landscape in crisis, foregrounding anxieties around memory, guilt and accountability, and recovery (in economic, social, and cultural terms). Alternatively then, the film’s “twist” can be read as a powerful statement, one which speaks to the continuity of Ireland’s architecture of containment in the present day, even as the nation professes to have moved on.