by Dave Robbins. This text may be archived and redistributed both in electronic form and in hard copy, provided that the author and journal are properly cited and no fee is charged for access. 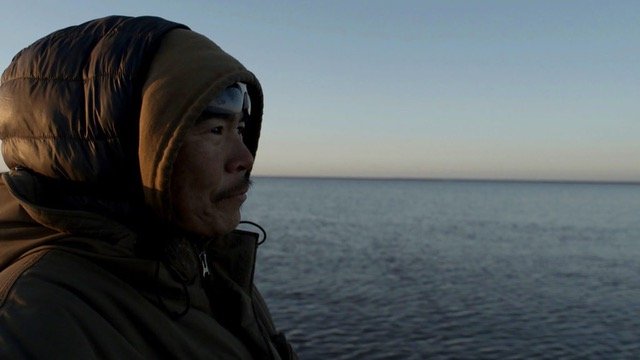 For about 30 years now, scientists, academics, journalists, filmmakers, NGOs and others have been trying to answer a deceptively simple question: how to get the public engaged with the topic of climate change. More particularly, they have wondered about visual communications – what imagery works with audiences?

The polar bear standing on floating ice, smokestacks in the distance, wind turbines on a mountainside – all these visual tropes have been tried, and all have drawbacks. Indeed, they are so hackneyed now as to become almost meaningless. A focus on the impacts of climate change, such as the loss of habitat for polar bears, frames climate change as a looming catastrophe, and can shock audiences into attention, but can also induce a sense of fatalism.

Some filmmakers have narrowed the focus from global governance and planet-wide weather systems towards people and communities. For example, Thule Tuvalu (2014) looked at two communities distant from each other: Thule in northern Greenland, and Tuvalu, a Polynesian island. In each case, a way of life is under threat from climate change, but there is an extra twist. The ice melting from Greenland is drowning low-lying Tuvalu, thousands of miles to the south. Emphasising the new smaller scale focus, one reviewer praised Thule Tuvalu as “…one of the earliest [films] to sideline impersonal statistics and talking-head scientists, focusing instead on the communities directly affected” (Weissberg).

There has been a significant shift away from a global perspective on policy and climate impacts (as in the Al Gore documentaries) and towards a focus on solutions and a human scale perspective. Demain/Tomorrow (2014), a French documentary focusing on climate solutions, is an example. The ground-level perspective is also evident in recent documentaries such as After The Fire (2019), Last Call for the Bayou (2019) and Lowland Kids (2019). The news media have stopped treating climate change as a single, homogenous topic and have begun to report on constituent issues such as pollution, air quality, fracking and agricultural systems. The same is true of the visual media, with films such as Gasland (2010) (fracking), Mossville (2019) (petrochemical pollution) and The Story of Plastic (2019) (plastic production) dealing with issues that contribute to or are caused by climate change, rather than with the over-arching problem itself.

Into this increasingly crowded and evolving field comes Losing Alaska by Irish filmmaker Tom Burke, a beautiful, often moving observational documentary about the people of Newtok in Alaska, whose village is at risk from the melting permafrost and coastal erosion. Although the film is book-ended by footage of a 2015 speech by President Obama in which he warns about the impacts of climate change on Alaska, harking back to a time when the notion that climate change is a hoax perpetrated by the Chinese to weaken the US economy had yet to take hold. There is otherwise no mention of climate change in the piece. The locals – mostly native Youpik people, plus a few white Americans – do not talk about the climate. They talk about “the river” and its increasing proximity.

The film opens with series of shots of locals looking up as a light aircraft comes in to land. Aerial shots show houses and boardwalk-style roads, clumps of melting snow and a soggy landscape, with grass the faded yellow it gets when it’s been covered by snow for a time. A framed photo shows coastal erosion over the past years. The sea has just claimed 30 feet of land over a stormy few days. The land looks soft and peaty, and the waves hit it hard, burrowing under and leaving precarious platforms overhanging the waves. “The land falls down and cannot pick itself up”, says Bosco Charles.

Another interview subject, Jackie, puts the village’s plight in historical context. The federal government would build a school and a post-office and force the Yupic people to settle around these symbols of “civilisation”. Their nomadic lifestyle came under threat, especially when the government began to take their children and put them in boarding schools. “When you have been doing something for 15,000 years, and someone puts a stop on it, the consequence is what you have now”, she says.

What do you have now? A village living at the edge of the world, between land and sea and between the future and the past. There are two rival village councils, one more modern and forward-looking, the other more traditional and elder-led. “We’re part of the US the rest forgot”, says one. The new council was elected at a meeting of locals, but the old one refused to stand down. There are two native administrators – Tom John (new) and Stanley Tom (old) – with the result that the Federal Government doesn’t know which to deal with.

The Youpics are subsistence hunters. They catch and kill 95% of what they need. “They would survive if they couldn’t get to a store”, says one of the white American women. They hunt for seal, using binoculars and rifles in place of the harpoons of old. Burke includes some beautiful footage of a calm day at sea, the sun shining on the glass-like surface, until the crack of a rifle breaks the spell. The hunters motor up to their prey, dispatching the seal with a kill shot. They dry the flesh in the wind.

The white Americans in Newtok offer an outsider’s perspective. Kevin, a teacher at the school, and his family were welcomed by the Youpic and feel part of the Youpic family. His wife sits with the other white women, playing cards and talking about how Newtok has been forgotten by the rest of America. “There is no running water. They’ve been on a boil water notice for 10 years”, says one. “You don’t expect this in America”, says another, referring to the shacks and timber houses that make up the village.

The Youpic seem like calm, thoughtful people, slow to anger and quick to laugh. The white Americans speak of the welcome they received from the Youpics, of the sense of family that abounds in the settlement. The schoolteacher Kevin tears up when he thinks about it. Burke records some beautiful images of village life: groups of kids playing basketball outside, their movements silhouetted against the sky, their breath suspended in the freezing air. And some surreal images, as the kids go trick-or-treating at Halloween and Malificent, some vampires and dinosaurs whizz by on quad bikes. Or a group of women sitting outside, gutting fish as the wind howls. He captures well the gossipy closeness of small communities. The talk is of those who are moving, those thinking of moving, and those who have moved. And of the sea and its encroachment: “It’s getting awfully close to Nathan’s house”.

One family have moved to Anchorage, and the contrast is stark: traffic and streets in place of quiet and vast skies. The movers still talk of Newtok, and use the same, all-purpose cutting tool – like a small axe-head – that the Youpic use back in the village. At least they have plumbing. Back in Newtok, they use the wonderful euphemism of “honey buckets” for the five-gallon drums of human excrement they throw into the sea.

Others are planning to move to a new village supposedly being constructed for them in Mertarvik, across the bay. Mertarvik is safer, more sheltered and built on higher ground. There is footage of the US Marine Corps helping to built it a few years previously, but the plan seems to have run out of steam, or money. Now it is back on the agenda, and the issues of who is leaving and who is staying is a constant topic in the village.

What draws an Irish filmmaker to this story? Landscape, for one. The beautiful aerial shots of Newtok, which sits between where the Ninglik and Newtok Rivers enter the Bering Sea, reveal a place that looks like the west of Ireland: a boggy, watery expanse, pockmarked by small lakes, a land that is half water already. And community, for another. This tale of a remote group neglected by officialdom and the elites of the “lower 48” has resonances with the Irish experience.

The film addresses universal themes too: the pull and tension between tradition and the old ways versus modernity and the need for change. This tension is too much for some: suicide is a dark undercurrent in Newtok, and online bullying takes place even at the edge of the world.

The film ends with that circling plane. We know now that it is coming for the schoolteacher Kevin and his family. In the time the viewer has spent with the people of Newtok, the phrase climate change has not been uttered, yet the impact of the warming climate and the melting permafrost have been powerfully conveyed. Perhaps the best way to deal with climate change in a documentary is not to mention it at all.