by Emma Radley. This text may be archived and redistributed both in electronic form and in hard copy, provided that the author and journal are properly cited and no fee is charged for access. 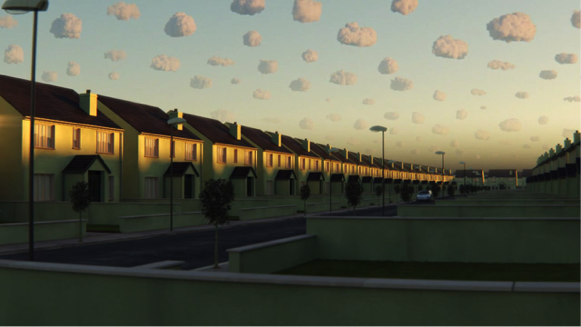 Lorcan Finnegan’s second feature, Vivarium, made its public debut, inauspiciously, in March 2020, less than a week after much of the world entered lockdown due to the Covid-19 pandemic. Given the impossibility of any kind of theatrical release, the film was made available through various streaming services, and in fact, the lockdown itself provided a ready-made framework for the distribution company to play on in its marketing. After all, what could be more appropriate to capture the skittish ennui of the first days of quarantine, when everything seemed slightly unreal, slightly cinematic even, than a horror/sci-fi film that gives us a couple trapped in a very grim housing estate with a very demanding child, living the same day over and over, with no possibility of escape?

The plot and characterisation are spare: a young couple, played by Imogen Poots and Jesse Eisenberg, is searching for a home to buy. Everywhere is beyond their budget, or wrong in some unnamed way, until they wander into an estate agency staffed by a very strange man named Martin, who manages to convince them to have a look at a house in a brand new development called Yonder. They agree, though both of them are clearly horrified at the thought of living in suburbia – Gemma and Tom are a prosaic hipster couple, a gardener and a teacher at a bohemian, but clearly very middle class, school. Once they arrive at the house in Yonder, Martin shows them into number 9, and disappears while they poke sardonically around the garden. Gemma and Tom decide they’ve had a lucky escape, and head back to their car, but soon find that they are unable to leave: every turn they take in the labyrinthine development, brings them back to number 9. After trying every avenue to escape, including burning number 9 to the ground but finding it, creepily, perfectly intact the next morning, they accept their fate as suburban citizens. They find a cardboard box outside, with a new-born inside, and a note reading: ‘raise the child and be released’. Time ticks on, and Gemma and Tom become increasingly alienated, from each other, and from themselves: Tom develops an obsession with digging a large hole in the garden, and Gemma struggles to deal with the child, who grows preternaturally quickly, and appears to be some kind of demonic pod-person, replete with a skittering walk and a mysterious old book filled with arcane symbols. Suburban citizenship, indeed.

Lorcan Finnegan’s previous work (also with writer Garret Shanley) demonstrates a particularly refined treatment of the Irish landscape, in ecological and political terms. Foxes, his first short film, released in 2012, has a somewhat similar premise to Vivarium: a young couple, living in one of the few finished houses in a ghost estate, slowly start to unravel. The woman, whose work as a photographer has dried up due to the recession, becomes fixated on an urban fox, following it through the development and taking pictures of it framed against the overgrown gardens and unfinished houses. The dystopic atmosphere of the ghost estate is perfectly realised in melancholic aerial panning shots, for example in the sharp contrast between the couple’s perfectly manicured lawn and the environment of the spaces around them. Ellen’s tracking of the fox takes her towards the increasingly atavistic fringes of the development, and indeed, civilised modernity itself – the film astutely captures the apocalyptic feel of the recessionary Irish landscape (both economic and physical). Finnegan’s 2016 feature, Without Name, is a horror film about a land surveyor sent to evaluate some woodlands earmarked for commercial development, who – inevitably – begins to experience disturbing supernatural events. Here, Finnegan’s portrayal of the forest has an eerie, and beautiful, gothic sensibility, and coupled with the ecocritical framework of the confrontation between nature, tradition, and modernity, Without Name is another cogent example of the compelling way that Finnegan and Shanley can engage and represent cultural anxieties around neoliberal habitus in contemporary Ireland.

In Vivarium, the suburban development of Yonder is likewise strangely, but compellingly, rendered, also using slow and ominous aerial shots of Gemma and Tom’s car attempting the navigate the circuitous terrain of the estate. The visual composition of Yonder has a distinctly painterly feel, an aesthetic style intensified by the artwork displayed in number 9, which is all images of the house itself. This painterly feel is a digital one, rather than conventional brushstrokes: the perfectly uniform clouds that dot the skyline, the polychromatic sunset, the uncanny geometry of the houses in the development as they stretch into the horizon, all suggest something computer generated, something in the order of a simulacrum. But there’s something raw and real underneath. The large hole that Tom digs in the rubbery garden soil, and in which he spends more and more time, becoming sicker and sicker, is an earthy, corporeal space, claustrophobic and in contrast to the manufactured and sterile environment above ground. At one point in the film, Gemma follows the demon off-spring through a gap under the kerb, and plunges down through a range of other identical houses, filled with similar couples trapped in the same nightmare, weeping, having sex, self-harming – again, creating a jarring juxtaposition between the carnal humanity of Gemma and Tom, and the malevolent automatons, Martin and the Boy.

There’s a lot going on in this film, despite its extremely circumscribed architecture. What does it all mean? Here, perhaps, it starts to unravel a little. On one level, it’s a commentary on neoliberal, heteronormative, citizenship, and in this respect, follows the ideological underpinnings of Finnegan and Shanley’s other work, Foxes and Without Name. Yonder represents the pinnacle and limit of contemporary middle-class desire and achievement (the billboard as Gemma and Tom drive in shows a multicultural family smiling in front of the front door of the ubiquitous number 9, with the tagline “You’re home right now: Quality Family Homes, Forever”). Gemma and Tom eat vacuum packed, pre-prepared food, dropped off daily to their door in a carboard box like an upmarket meal subscription service; the goods appear luxurious (steaks, champagne, strawberries), but are devoid of real taste and pleasure. And of course, they raise the child, and then they die – in a monstrous intensification of heteropatriarchal circularity the fully grown offspring takes the place of Martin back in the estate agent, and waits patiently for the next house-hunting couple to arrive.

In some ways, the film is timely – the relentless tedium of the neoliberal treadmill is uneasily resonant with pandemic life, where neoliberal corporate culture insists that we all carry on as normal in profoundly abnormal circumstances: just keep going, never mind that your child might actually be a horrifying demon with a grotesque throat sac. In other ways, though, the film is strangely belated. The neoliberal critique, the rendering of the suburban phantasmagory, the incitement to get on the property ladder before the prices “go through the roof”, all feel more 2006 than 2020. Of course, when the film was written and produced, the country was on the cusp of the Tiger, Part 2: the recovery in full swing, the ghost estates reanimating, the property market just starting to bloat. Still, from where we currently stand, in the pandemic-induced liminal space between the Before Times and the Unknown Future, Yonder seems out of place, both temporally and culturally (perhaps if number 9 was a tiny unit in a co-living development, it might have a more uncanny resonance).

Where the film is most effective, however, and most affective too, is in its depiction of the difficult and unspeakable facets of intimate relationships, both as a partner and as a parent, all horribly intensified in the oppressive domesticity in which we are currently existing. The film represents the uncanny in the true, Freudian, sense: in the unheimlich space of number 9, all manner of traumatic experiences unfold around the body of the demonic child (the ‘primal scene’, neglect, physical and psychological abuse). The darkest capabilities of parenting are particularly painfully imagined: the child screams unintelligibly whenever it needs something – food, rest, attention – and Tom and Gemma struggle to placate it: at various points, Gemma shakes it roughly, sobbing “what do you want?” over and over again, and Tom locks the child in the car, or punches it. These moments are unflinchingly horrific, magnified by the angelic appearance of the boy playing the younger iteration of the child (Senan Jennings), on whom all these violences are inflicted: his slightly lisping delivery, and strangely endearing fascination with making the “woof-woof” sound of a dog, always reminding the viewer that, veiny throat sacs or not, this is a child. Certainly, the film explicitly intervenes in the nature vs nurture debate around child development: on numerous occasions, we see the child mimic Gemma and Tom’s arguments and emotions, in a disquieting and perverse display of internalisation and acting out. In this respect, Vivarium recalls other films that interrogate the horror of parental ambivalence, such as The Babadook (Jennifer Kent, 2014), and Lynne Ramsay’s nihilistic 2011 adaptation of Lionel Shriver’s We Need to Talk About Kevin. Gemma’s struggles with her own reluctant, but insistent, maternal instinct are especially thought-provoking: in some ways, the film could be read as a nightmarish exploration of post-natal psychosis. The bleak final sequences bring the viewer back to the disturbing cold open, the story of the cuckoo who kills the nestlings and makes a surrogate of the mother bird (realistically, and distressingly, executed). The fully-grown child no longer has any need for Gemma, and, zipping her into a body-bag, tells her that she has fulfilled her role of child-rearing and can be released – a mother’s duty is to “prepare her son for the world”, and then die. Again, the psychoanalytic underpinnings of the film come to the fore: this is exactly the role assigned to the mother in the conventional, oedipal, framework of Freud, Lacan, et al. Gemma refuses this role: her final words are a repetition of her refrain to the child throughout the film, “I’m not your fucking mother”. The response perhaps crystallises that of the viewer, searching for meaning in the film: “whatever”, the man-child-demon shrugs. Like Yonder (and indeed, the pandemic), it’s hard to see beyond the horror of the here and now.